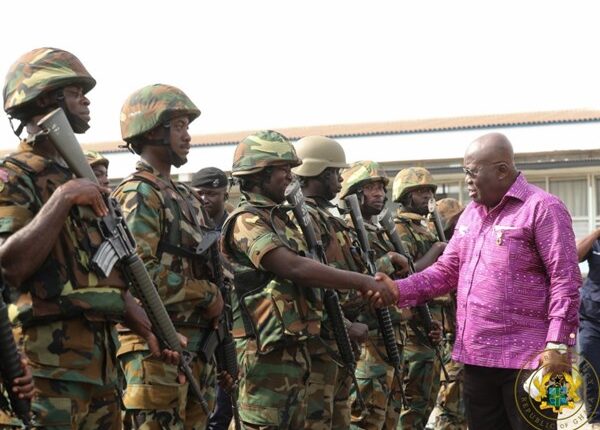 There is No Protocol Recruitment Into Armed Forces – Nitiwul

Responding to an urgent question by the Member of Parliament (MP) of Adaklu, Kwame Governs Agbodza on the floor of Parliament on Thursday, the 24th of June 2021, the Minister of Defence said his outfit has rather pushed for female intakes to increase by 5%.

The question was predicated on an assumption that parliamentary constituencies, as well as other quarters, were awarded protocol quotas in the recruitment of Ghanaian soldiers.

But Nitiwul responded that that was not the case.

Rather, “[t]he original 10% which is in the regulation for women under the current dispensation, has moved to 15%. So it’s essentially [gender] balance, not constituency level,” he told lawmakers.

But Nitiwul conceded that there is a public perception that recruitments into the Ghana Armed Forces have always been shrouded in secrecy and on protocol arrangements.

The minister however said that recruitments on the grounds of protocol quotas have long been stopped to provide a level playing field for all eligible personnel.

Nitiwul promised the Armed Forces will continue to resort to the national dailies such as the Ghanaian Times, Daily Graphic and the official site of the Ghana Armed Forces to announce their intentions when recruiting.

The belief and expectation of protocol and shortcut admissions into the security services have become a permanent feature of the political economy of the Ghanaian security sector.

Oftentimes, the expectations of shortcut admissions have been shown to generate admission scams into security agencies.

In May this year, a police officer was dragged before the Accra Circuit Court after duping 44 persons, with a promise of enlisting them into the Ghana Police Service.

Sergeant Kennedy Asomani failed to keep his word after allegedly collecting some GH¢100,000 in total.

Sergeant Asomani, now on interdiction, is said to have told the complainants that he was enlisting people through protocol links to the Ghana Police Service.

The accused is facing four counts of defrauding by false pretence, charges he has denied knowledge of.

The court presided over by Priscilla Dapaah Mireku, admitted him to bail in the sum of GH¢100,000.00 with three sureties, one to be justified.