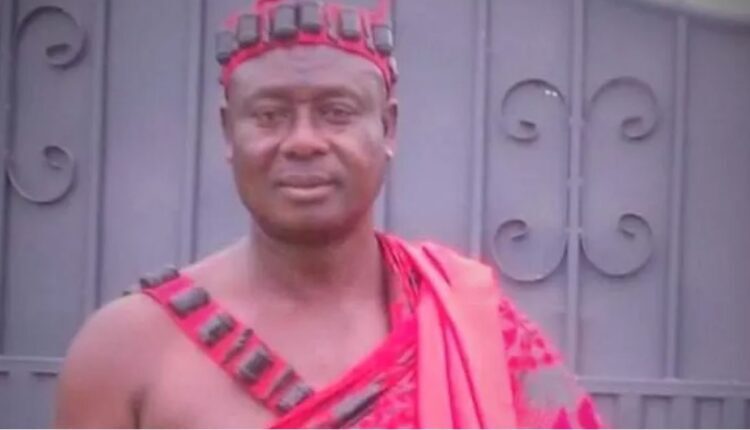 ”Third Suspect Is Innocent; He Was Only Contracted To Dig Hole For Victim” – Chief In Mankessim Murder Trial

The chief involved in the murder of a student nurse at Mankessim has pleaded with the court to release the third suspect, Jonathan Obeng.

The Tufuhene of Ekumfi Akwaakrom Christopher Ekow Quansah insists the third suspect, a mason, is innocent and was only contracted to dig a hole for the victim to be buried.

He, therefore, asked the Cape Coast District Court to withdraw the case against the 26-year-old mason.

The prosecution disagreed. They believe the accused Jonathan Obeng equally acted with a common purpose with the first two suspects to commit the crime.

The case was adjourned at the request of the prosecution, which asked for more time to conclude its investigations.

All accused persons were subsequently remanded to reappear on October 18.

Meanwhile, the family of the late Georgina Asor Botchwey has called on the court to expedite the trial.

“The government should sanction them accordingly to ensure that everyone is pleased. I am confident that on October 18 when they reappear before the court, they would admit that they are guilty.

“It is clear they are guilty; so, the court should not continue adjourning the case. It should rather expedite the trial. Currently, as I speak to you, the deceased’s sister has been left in total shock; her life has been messed up by this case. I doubt if she would even have the courage to marry or show interest in any man,” Kate Swanzy spoke on behalf of the family.

On 9 September 2022, the accused persons picked the victim up in a Taxi at the Ankaful Hospital Pedu junction in Cape Coast.

Meanwhile, news that the deceased had been missing for three weeks began to spread in town  when she failed to return home after the interview.

The suspects, a self-styled pastor, Michael Darko, 48 and the Tufuhene of Ekumfi Akwakrom Christopher Ekow Quansah, 65, were subsequently arrested and charged with conspiracy to commit murder and murder, contrary to section 46 of the Criminal Offenses Act 1960, Act 29.