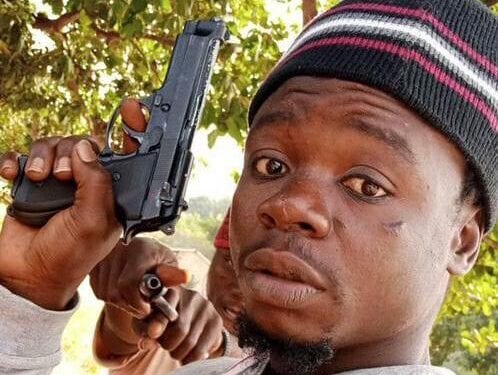 Police in the Ashanti Region has arrested three men who were brandishing guns and large money in a viral video.

The police have asked the public to volunteer information on any criminal activities involving the gang and help arrest the fourth who is still on the run.

The three are currently in police custody, pending further investigations.

They have been identified as Rev Alfred Dakora, 43, Emmanuel Dakora, 26, and Richard Sulemana, 28.

The three siblings were arrested at Obuasi in the Ashanti Region.

Police retrieved the weapons, including a pump-action gun, pistols, and five spent cartridges from the suspects.

“These three men are in our custody in relation to the video and pictures we have seen. We have retrieved the pump-action gun, as you can see. There is a fourth suspect whom we are trying to also arrest,” he said.

The suspects have denied involvement in any criminal activity.

“The Command would like to appeal to anybody, for that matter the public, especially those who allege any criminal activity against these young men to come forward, give us information so that we can put them before the court,” DCOP Adjem.

Meanwhile, one of the suspects, who has been identified as Obour, has been explaining on social media that they are not criminals.

According to him, the video circulating on social media was recorded long ago in Wa in the Upper West Region during their small-scale mining engagement.

He explained that the guns belonged to one of their senior brothers, and they used them as guards at a mining site to scare a rival group.

The video has surfaced at a time that concerns have been raised over security issues in the country, following attacks on bullion vans, daylight robberies, and a threat of a possible attack by Burkinabe bandits.

On Monday, June 14, a group of armed robbers attacked a bullion van at Adedenkpo, near James Town in Accra.

The attack resulted in the death of police officer General Constable Emmanuel Osei and a hawker, Afua Badu.

In another incident, armed robbers carried out an attack on a bullion van at Gomoa Okyereko on the Kasoa – Winneba road Thursday afternoon.

The robbers shot at the front passenger seat, where a police escort was sitting, shattering the window in the process.

However, the police escort asked the driver of the vehicle to speed off and called for reinforcement.

Again, the Upper East Regional Security Council has put all border security agencies on high alert, following a police wireless message indicating possible attacks on Ghanaian communities in that region and other parts of northern Ghana by suspected Burkinabe bandits.