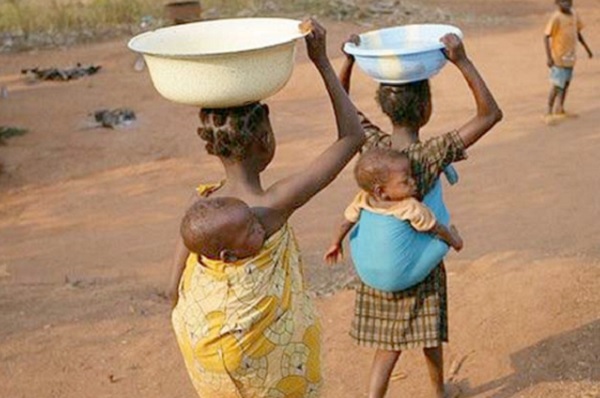 I suspect there will never be a consensus on what constitutes the proper upbringing of children.

I have a stronger suspicion that the definition of a proper upbringing of a child is very much influenced by the economic status of the parents of the child.

When there is tap water in your house, there will be no question of sending your eight-year old to the river to fetch water, and if you don’t cook with firewood, it is most unlikely you would set your ten-year old the task of fetching firewood or fanning the coal-pot and risk being accused of child labour.

I have to concede that my attitude to the subject of child labour now makes room for considerations of cultural differences and sensitivities.

Armed with the most delicate cultural sensitivity, I am not sure I can ever find any justification for the young children who are made to dive deep into the depths of the river in Yeji and are regularly “liberated” by various Non-Governmental Organisations (NGOs) and our own Gender Ministry.

In much the same way, I wonder where to place the little boy I met last week at a marriage ceremony.

He looked to me like an eight-year old and held the audience spellbound with his mastery of kete dance steps.

I wasn’t sure how much of the monies being given to him in admiration of his dancing skills would end up in a bank account for him. He looked happy and assured and was enjoying what he was doing.

However, I resisted all his charms and didn’t give him any money because all I could think of was: “What was an eight-year old boy doing dancing at a marriage ceremony on a Thursday morning and why was he not in school?”

There is a shop in my neighbourhood in Accra that stocks high-end furniture and carpets imported from Pakistan.

They usually have displayed casually on all the furniture sets and carpets, a card with a neatly printed legend, “Carefully made in Pakistan without child labour”.

Obviously, this is meant to reassure would-be customers that they could buy and use the expensive furniture and carpets without feeling any guilt that poor Pakistani children had been exploited in the manufacture of the goods.

Since I have never been to Pakistan and do not know very much about the furniture or carpet industry in Pakistan, I have decided I would have to take the word of the nice gentleman in the shop.

The printed message, though, tells me that the Pakistan carpet industry has the same problem that the Ghanaian and Ivorian cocoa industry have of being accused of using child labour.

So, where is the line between child labour, which everybody is against, and children helping at home and learning the skills for survival in later life? If you are ten years old and your mother sells cooked food by the roadside and you help to serve the customers, I wonder if your mother is guilty of child labour.

I am thinking of the campaign against the use of child labour on cocoa farms and the pressure on La Cote d’Ivoire and Ghana, the world’s two leading cocoa producers.

Indeed, some famous chocolate companies are being pressurised to stop using cocoa from these countries as punishment for using children on cocoa farms.

I have some minor personal experience of this phenomenon.

From age five to nine, I lived in the village with my grandmother.

She was a farmer and she used to take me to the farm with her on Saturdays when there was no school.

I am not quite sure how much use I was to her on the farm, but I certainly learnt to plant cocoa and I took part in harvesting cocoa pods and preparing the seeds for drying.

I carried loads of foodstuff on my head back home from the farm.

An international news film crew coming across me at the time with my grandmother would probably have filmed me as an example of the use of child labour on Ghana’s cocoa farms.

But I wonder if my time on the farm was anything that sinister.

This was my grandmother who loved me to bits and provided me with some of the happiest moments of my life and my recollections of those times were pure bliss and idyllic.

Obviously, I cannot compare my time on the farm with those children who are not loved or who have been trafficked.

Nor would I ever forget the man I once heard on a BBC radio programme, who told Kwaku Sakyi Addo, as casually as you can imagine, that he had eleven children and had, therefore, sold two of them to the fishermen in Yeji, so he could have some money to look after the rest of the children.

I do not want to belittle the suffering that many children go through in the world.

But I just want to make the point that not every child who goes to the farm is being abused.

I recall a young Ghanaian friend of mine in London and her twelve-year old daughter.

My friend was doing her best to bring up her child in the manner she had been brought up and that meant the child had to wash dishes, make beds, scrub the bathroom, help in the kitchen, cut up onions and learn to cook.

An English school friend of the child came to spend a weekend, saw what tasks her friend had to perform at home and before we knew it, my friend’s daughter was threatening to call the Social Services to report her mother for child abuse.

Her English school friend was horrified at the tasks her friend was being made to undertake at home and she convinced her that she was being abused and should make a report to the social services.

I am afraid my friend’s reaction was a bit extreme; she took a whip to her daughter and told her she was giving her a proper reason to call the social services.

She was not going to have a daughter who did not know how to cook or keep a clean house and she was going to send her daughter back to Ghana where mothers were free to make their daughters learn these things without interference from anybody.

Or, so she thought.

These days, things have changed here also to the extent that you can now safely have a stay in a middle class Ghanaian home and be assured that all the cooking and cleaning in the home is carefully done without child labour.