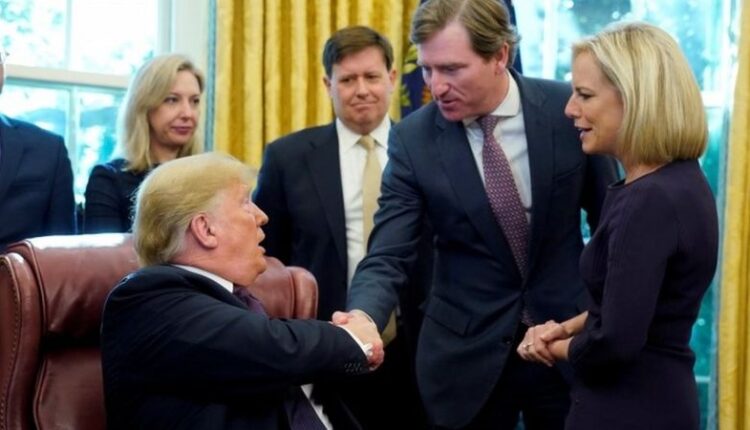 Donald Trump says he has fired a top election official who contradicted the US president’s claims of voter fraud.

Mr Trump has refused to concede the US election, and has made unsubstantiated claims of “massive” voter fraud.Election officials said the vote was the “most secure” in US history.

Mr Krebs is the latest official to be dismissed by the US president following his defeat, with Defense Secretary Mark Esper also shown the door amid reports Mr Trump doubted the Pentagon chief’s loyalty.

There is speculation in Washington DC that before Mr Trump leaves office in January, CIA director Gina Haspel and FBI director Christopher Wray could also be for the chopping block.

Like many others fired by Mr Trump, Mr Krebs reportedly only learned he was out of a job when he saw the president’s tweet on Tuesday.

But following his dismissal, the former Microsoft executive appeared to have no regrets.

He had run the agency from its inception two years ago in the aftermath of alleged Russian meddling in the 2016 election.

To guard against potential cyber-threats, Cisa works with state and local election officials and the private companies that supply voting systems, while monitoring ballot tabulation and the power grid.

Why was Krebs fired?

He had reportedly incurred the White House’s displeasure over a Cisa website called Rumor Control, which debunked election misinformation, much of it amplified by the president himself.

Mr Krebs tweeted: “ICYMI: On allegations that election systems were manipulated, 59 election security experts all agree, ‘in every case of which we are aware, these claims either have been unsubstantiated or are technically incoherent.’ #Protect2020”.

He was among senior officials from the Department of Homeland Security who last week declared the 3 November US general election the “most secure in American history”, while rejecting “unfounded claims”.

Though that statement did not name Mr Trump, on the same day it was published Mr Krebs retweeted a Twitter post by an election law expert saying: “Please don’t retweet wild and baseless claims about voting machines, even if they’re made by the president.”

Mr Krebs’ dismissal brought outrage from Democrats. A spokesman for President-elect Joe Biden said “Chris Krebs should be commended for his service in protecting our elections, not fired for telling the truth”.

Mr Trump’s campaign and its allies have filed a barrage of lawsuits in battleground states contesting the results, although election officials say no evidence of widespread irregularities has been found.

Time is running out. All outstanding election disputes nationwide must be resolved by 8 December. The official results are set to be confirmed when the US Electoral College meets on 14 December.

On Tuesday, Republican members of a bipartisan election board in Michigan refused to certify Mr Biden’s projected win in that state, only to back down after an outcry.

The two Republicans on the four-member board had objected to minor voting irregularities in Wayne County, home to Detroit.

But they relented after Democrats accused them of trying to disenfranchise voters in the majority-black city.

As a compromise, the board passed a resolution requesting that Michigan’s Democratic secretary of state conduct an audit of the jurisdictions involved.

Meanwhile, election officials conducting a by-hand recount in Georgia – where a fraction of a percent separates the two rivals – found more uncounted ballots for the second time this week.

The discoveries are expected to shave Mr Biden’s lead in the state to under 13,000, not enough to flip Georgia into Mr Trump’s column.

There was another setback for Mr Trump on Tuesday in Pennsylvania, where the state supreme court rejected his campaign’s argument that its observers had been denied sufficient rights to watch ballot counts in Philadelphia.

Also on Tuesday, the Trump campaign, along with Nevada’s Republican party, filed another lawsuit challenging that state’s election results.

Mr Biden is the projected victor in Nevada, but the latest legal action asked a judge to declare Mr Trump the winner, or annul the race altogether.

Judges have rejected other Trump campaign lawsuits disputing the tally in Clark County, home to Las Vegas, after ruling there was no evidence to support claims of systemic fraud.