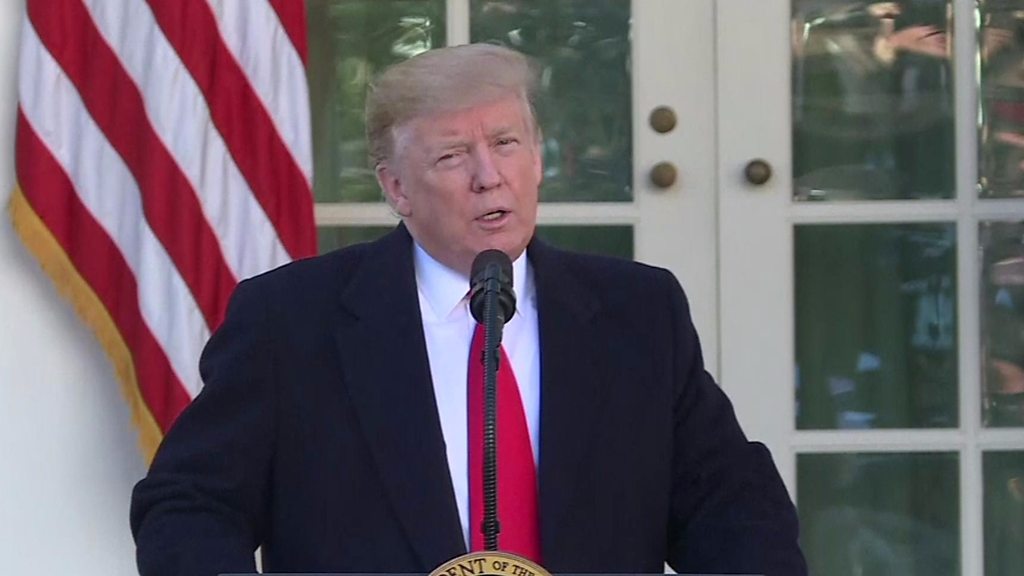 Trump walks out of shutdown talks with a ‘bye-bye’

President Donald Trump has walked out of a meeting with Democratic leaders as negotiations broke down on the 19th day of a partial US government shutdown.

Nancy Pelosi and Chuck Schumer stuck by their refusal to fund his US-Mexico border wall, prompting Mr Trump to call the meeting “a total waste of time”.

Democrats again accused the president of throwing a “temper tantrum”.

The first payday since the shutdown began is due on Friday for 800,000 federal workers, who will go unpaid.

Mr Trump has demanded $5.7bn (£4.5bn) to build a steel barrier, which would deliver on a key campaign pledge. But Democrats – who control the House of Representatives – have refused to back the funding.

How did the meeting go?

It was certainly brief, at only 14 minutes.

The president hosted the Democratic Party leaders in the Situation Room, the conference centre in the West Wing basement.

Trump posed a direct question to House Speaker Nancy Pelosi about whether she would fund the wall. His tweet following the meeting reflected the outcome of that – he said “bye-bye” and left

Just left a meeting with Chuck and Nancy, a total waste of time. I asked what is going to happen in 30 days if I quickly open things up, are you going to approve Border Security which includes a Wall or Steel Barrier? Nancy said, NO. I said bye-bye, nothing else works!

Mr Schumer confirmed the exchange, saying: “He [Mr Trump] asked Speaker Pelosi, ‘Will you agree to my wall?’ She said no.

“And he just got up and said, ‘Then we have nothing to discuss,’ and he just walked out. Again, we saw a temper tantrum because he couldn’t get his way.”

Mr Schumer reportedly asked Mr Trump: “You are using people as leverage; why won’t you open the government and stop hurting people?”

A White House official told the New York Times Mr Trump had said: “I am trying to do the right thing for the country. This isn’t about politics.”

“The president walked into the room and passed out candy,” he said. “I don’t recall him ever raising his voice or slamming his hand.”

Kevin McCarthy, Republican leader in the House of Representatives, said he found the Democrats’ behaviour “embarrassing”.

On Tuesday, Mr Trump delivered his first televised Oval Office address to the nation, where he described the border as a humanitarian and security crisis. The Democrats called the president’s claims a fake threat.

Where do we go now?

Mr Trump is going to the border on Thursday.

He will visit a border patrol station in McAllen, in the Rio Grande Valley of Texas. He will get an update on security at what is the busiest section of the border for illegal crossings.

Republican leaders and Mr Trump insist the party is “totally unified” behind him, and most of the party appear to back his uncompromising stance.

I continue to stress that there is no good reason for a shutdown. The reality is thousands of federal employees & contractors have no paycheck in sight, small businesses that rely on them are suffering & there’s no reason they should be held hostage to a political dispute

Mr Trump still has the option of declaring a national emergency on the issue, opening up defence department funding for the wall. But this would be hugely controversial and would prompt a lengthy legal battle.

The Democrats are refusing to budge, believing the public mostly blame Mr Trump for the shutdown.

A new opinion poll suggests just over half of Americans (51%) blame President Trump, although 77% of Republican voters back his demand for wall funding.

How is the shutdown progressing?

Partial shutdowns occur when Congress cannot agree a budget by a certain deadline or the president refuses to sign it.

This shutdown, which began on 22 December, has affected 25% of the government and some 800,000 federal employees. About 350,000 of them are furloughed – a kind of temporary lay off – the rest are continuing to work without pay.

The first pay day since the shutdown falls on Friday and will pass without workers getting salaries.

After past shutdowns, workers have generally been refunded with back pay, although that does not apply to those working for third-party contractors. The refunds are also not automatic – Congress must approve the measure.

Some affected federal workers who spoke to the BBC said they had resorted to a number of measures, including taking other jobs, racking up credit card bills, tapping into savings or taking on loans at high interest rates to pay their bills.

The Office of Personnel Management, which oversees federal workers, has urged them to reach out to creditors and landlords for a deferral or reduction of payments.

This weekend the shutdown will become the longest in US history.