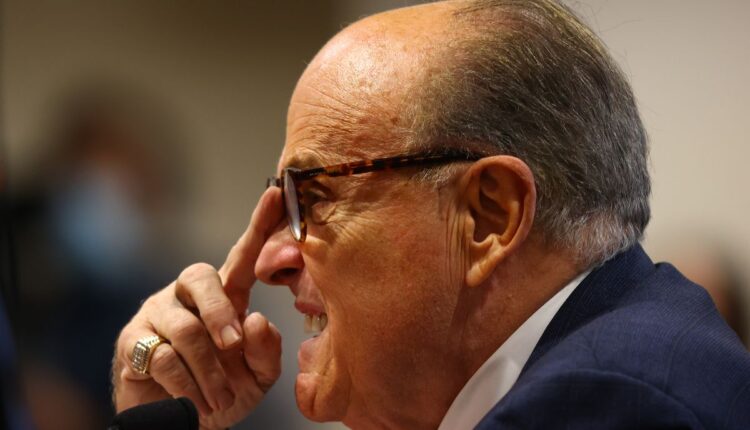 Rudy Giuliani, the former mayor of New York City and President Donald Trump’s personal attorney, has tested positive for COVID-19. Trump delivered the news by tweet, writing “Get better soon Rudy, we will carry on!!!”

Giuliani, 76, was admitted to Georgetown University Medical Center on Sunday, two people who were aware of his condition but not authorized to speak publicly told USA TODAY.

Andrew Giuliani tweeted that his father was “resting, getting great care and feeling well.”

“Thank you to all the friends who have reached out concerned about his well being,” he added.

Later Sunday, Giuliani expressed appreciation for “the prayers and kind wishes” on Twitter, adding that he is “recovering quickly and keeping up with everything.”

Thank you to all my friends and followers for all the prayers and kind wishes.

Recovering quickly and keeping up with everything.

Giuliani is the most recent in a list of close Trump associates who have tested positivefor the virus.

It is unclear how Giuliani became infected. He appeared on Fox News’ “Sunday Morning Futures” show to call for the Georgia State Legislature to overturn the election results in Trump’s favour an hour before his diagnosis was announced.

Giuliani has made multiple public appearances within the last week, including one at a Michigan State House panel and another at a Georgia State Senate hearing. Images from both events show Giuliani speaking in close proximity to others without a mask.

“Earlier this afternoon, we were made aware that Mayor Rudy Giuliani had received a positive diagnosis for COVID-19,” said State Sen. William Ligon in a statement, the subcommittee chairman who oversaw the hearing which Giuliani attended. Like Giuliani, many of the lawmakers present ignored social distancing guidelines and spoke to subjects without masks.

“Out of an abundance of caution, we want to encourage those who came into close contact with Mayor Giuliani to take every precaution and follow all requisite guidelines to ensure their health and safety,” Ligon’s statement said.

.@RudyGiuliani, by far the greatest mayor in the history of NYC, and who has been working tirelessly exposing the most corrupt election (by far!) in the history of the USA, has tested positive for the China Virus. Get better soon Rudy, we will carry on!!!

Though Giuliani has claimed he has evidence of bad behaviour, he has failed to provide it.

Everyone who attended this Georgia General Assembly hearing should get tested and/or be in quarantine. https://t.co/CWX6zD6Afn

“Prayers for Mayor @RudyGiuliani. He is a tough warrior!” tweeted Jenna Ellis, an attorney also representing the Trump campaign in its election challenges.

“The Trump Legal Team will continue our important work to fight for election integrity!” she vowed. “Our work won’t be affected and we press on. #CountAllLegalVotes.”

Giuliani has had health scares in the past. In 2000, while running for Senate in New York versus then-first lady Hillary Clinton, Giuliani was diagnosed with prostate cancer. He then dropped out of the race.

In 2007, while running for the Republican nomination for president, Giuliani was also hospitalized with “flu-like symptoms,” according to his spokesperson at the time.

Though he has been present at several White House gatherings which have been widely suspected to be “superspreader events,” Giuliani has not quarantined after potential exposure. Two weeks ago, Giuliani’s son, Andrew, tested positive for the virus.

Pakistan mosque blast: At least 28 killed after explosion in Peshawar