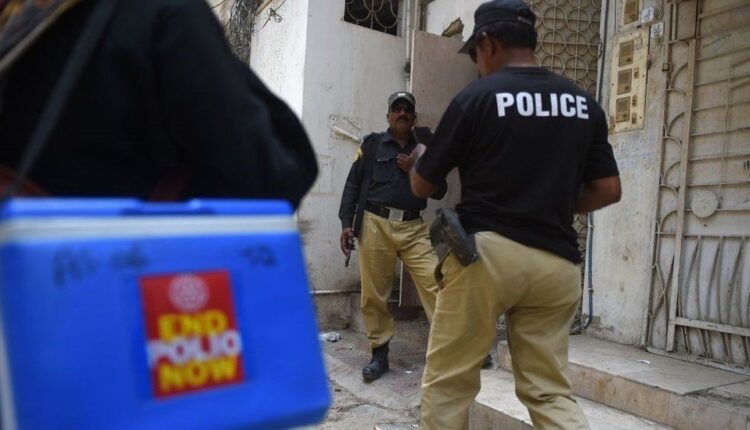 Two policemen guarding a polio vaccination team have been shot dead by gunmen in north-west Pakistan.

The team of two vaccinators was unharmed, police said.

Local polio vaccination teams are often targeted by anti-vaccine militants, some of whom claim vaccination is a Western plot to sterilise Muslims.

Pakistan and Afghanistan are the only countries where polio, which in severe cases can be fatal or leave patients paralysed, remains endemic.

The two gunmen had been hiding near a small water channel before opening fire on the guards from a “very close range”, local police said.

Many polio workers and their guards have been killed by militants in Pakistan over anti-vaccine sentiment, which includes the belief that the vaccines contain pig fat.

The global eradication of polio is a key aim of the World Health Organization. It was expected to be achieved some years ago, but pockets of resistance to vaccines have proved a challenge, while a recent jump in cases has caused alarm.

Pakistan reported its first case of polio for 15 months in April. Since then, 13 further cases have been declared – all in North Waziristan, a former Taliban stronghold bordering Afghanistan.

The US reported its first case of polio in almost a decade in July.

Polio virus was detected in sewage samples in London in June, leading to an urgent vaccination campaign of about one million children.

All children aged one to nine in Greater London will be offered a vaccine.

Polio is caused by a virus which spreads easily through contact with the faeces of an infected person or, less often, through coughing and sneezing.

Most people with the infection have no symptoms, while some develop flu-like effects.

In rare cases, patients become paralysed – most often in their legs – which can be fatal.