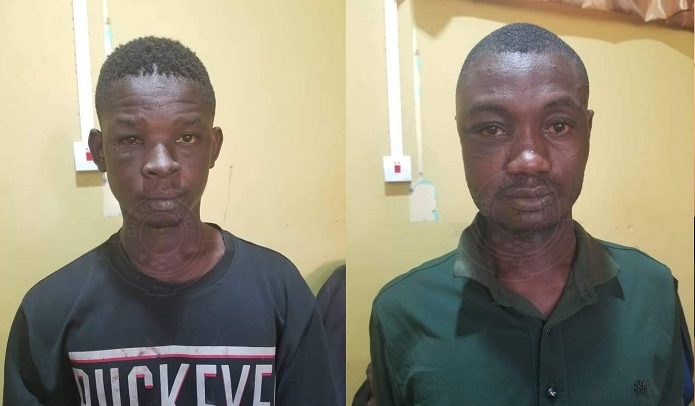 Two armed robbers who were arrested in the Ashanti Region have been sentenced to 40 years imprisonment.

The two, Emeka Opara and Samuel Kalo, were arrested on 30 May 2022, following their attack on a victim at ECOBANK, Abrepo Junction, where they succeeded in bolting with a bag containing GH₵ 30, 000.

The police, in a statement, said they were able to retrieve the GH₵ 30, 000.00 and successfully prosecuted them.

“Because the two have been duly convicted and are no longer suspects, we have displayed their images in line with our new standard operating procedure. Any member of the public who can recognise any of them in connection with other crimes should kindly contact the nearest police station for further action,” the release added.

The police further assured the public about its readiness to continue to fight crime and bring criminals to face justice.

Fast forward to 9 June 2021, a man was shot in the stomach in a daylight robbery by two armed men at Pig Farm.

On 11 June 2021, an unidentified man in an attempted robbery attacked the driver of a Nissan Pathfinder with registration number GE-8088-11 on the GIMPA- Fiesta Royale road.

On 14 June, three armed robbers on a motorcycle trailed a Mon-Tran bullion van and robbed occupants of the cash in the van –two were left dead at Adedenkpo in Jamestown.

Sometime in December 2021, two persons were arrested for the East Legon robbery that occurred on Sunday, 5 December.