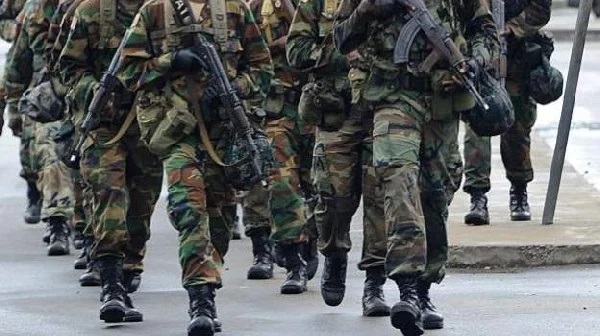 Two military officers who allegedly raped a past student of the Damongo Nursing and Midwifery College have been remanded into prison custody.

The two, before a Tamale District Court, have been charged with rape and conspiracy to commit crime.

Based on the facts, the suspects, who reside in Damango, went to the victim’s old school, where the victim had also visited a colleague.

The student is said to have come to the school for some documents around 11 pm on Sunday, 12 June 2022.

The suspects then allegedly took hers to a metal bench under a tree. According to the statement, the victim managed to dial her boyfriend’s number, but the accused persons took the phone from her.

They further carried the victim to a urinal and took turns to forcefully have sex with her. One of the suspects used a condom while the other did not.

The boyfriend, who sensed the lady was in distress after the call, followed up at the location. The suspects, upon seeing him approaching, took to their heels.

The incident was reported to the military command in Damongo, an identification parade was made and the two were identified.

The case was reported to the Damongo police, where a medical form was issued for examination.

A team of investigators also visited the crime scene and evidence of her underwear was retrieved.

Research shows that 96 children below 15 were defiled in Accra alone in 2019.

The figure constitutes the number of only reported cases being tried at the Accra Circuit Court in 2019.

Many experts say this figure could be more as parents of rape victims, for fear of social rejection and “shame”, refuse to report such incidents to authorities.

In some cases, even when the cases are reported, the intervention of highly placed persons leads to these cases being withdrawn to be settled at home. Also, in some cases, compensations are offered to the victim and family.

And this is the scenario across the length and breadth of the country, which suggests that a lot more girls are defiled almost on a daily basis.