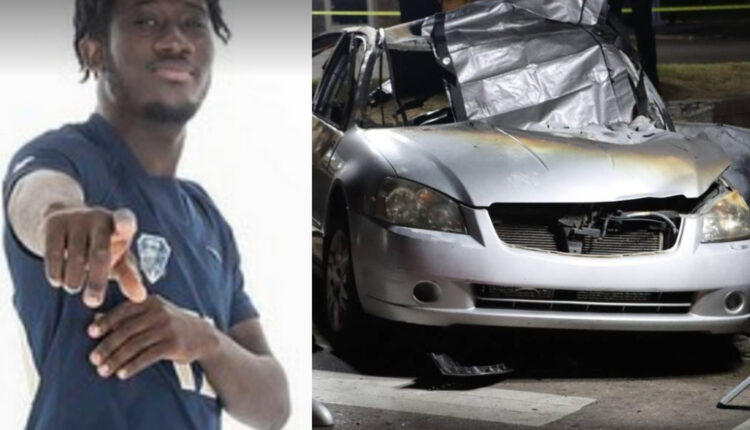 U.S based Ghanaian footballer confirmed dead in a car crash

American-based Ghanaian footballer, Eugene Quaynor has been confirmed dead after being involved in a gory car accident on Wednesday.

According to Oklahoma Police, the 23-year-old was at a stop light when a drunk driver in an SUV rammed into his car from behind.

Quaynor’s car subsequently veered through the intersection and hit a wall before catching fire in the process.

We mourn the loss of @ORUMSoccer student-athlete, Eugene Quaynor. Eugene was the epitome of the mission we strive for. He was a captain and had a spirit-empowered heart ready to impact the world for Jesus. His infectious smile will be missed, but we will never forget #27. pic.twitter.com/peL9daBkoB

“Eugene was a much-loved member of the Bucks’ team, as well as the Flint community,” the Flint City Bucks said in a statement.

“In addition to being a true warrior on the pitch, he was always eager to do community service work, free youth clinics, and charity events.”

The Oral Roberts University’s athletics department also stated: “Eugene was the epitome of the mission we strive for.

“He was a leader on the field as a captain of the men’s soccer team and had a spirit-empowered heart ready to lead and impact the world for Jesus. His infectious smile will be missed.”

Meanwhile, Phoenix Academy also mourned Quaynor’s death, saying: “Eugene can brighten any room with his infectious smile, a very humble man who leads by example. Words can’t explain how devastated we are.”

Police added that the SUV driver who hit Quaynor’s car tried to flee but has been arrested.

Quaynor was on the books of the Phoenix Academy in Ghana, before moving to America, where he joined the Flint City Bucks in Flint, Michigan.