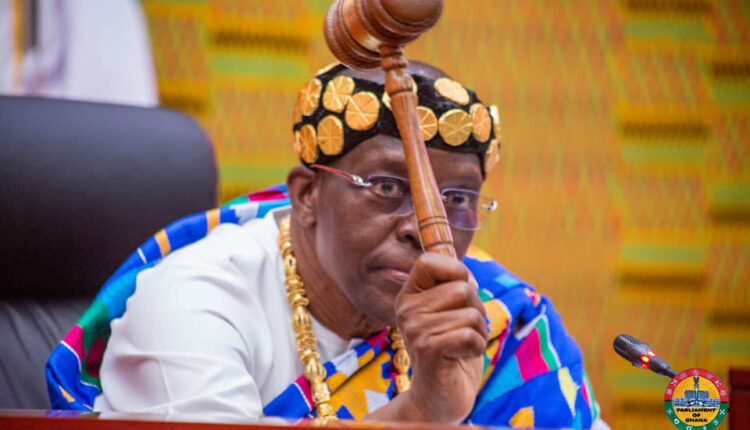 Until I am removed, do not counter me again – Bagbin warns Mensah-Bonsu

The Speaker of Parliament, Alban Bagbin, has cautioned the Majority Leader and Member of Parliament for Suame Constituency, Osei Kyei-Mensah-Bonsu, never to oppose him again.

This was after the two stated different positions about the allocation of funds to Parliament.

“I will not take that. I am in control here, and I will continue to be in control until my term of office ends, or you decide otherwise as members to remove me as Speaker of the house by the votes of three-quarters of members of Parliament. Please, this is the last time I will refer to it, and this is enough notice to whoever thinks he has the same authority as the Speaker. Enough is enough,” he said in anger.

The Speaker, addressing the house on Thursday, 26 May 2022, lamented how the Ministry of Finance was delaying the release of funds due to the house.

He asked that the ministry release every fund due entitled to Parliament with immediate effect because the house was not running efficiently in the absence of money.

However, the following day, the Majority Leader dismissed the assertions by the Speaker.

According to Mr Kyei-Mensah-Bonsu, at the time Mr. Bagbin made the remarks, the GHC25million due to Parliament had been dispersed but was going through the needed processes for Parliament to have access, so if the Speaker had taken his time and crosschecked with the Clerk of Parliament and the leadership of the house, he would have known that the monies owed Parliament had been paid.

He urged that the Speaker be minded by some of his utterances, especially when speaking to the public.

The MP for Suame subsequently granted media interviews and made similar positions to the effect that the Speaker was trying to give the government a bad name.

The Speaker’s attention was drawn to Osei Kyei-Mensah-Bonsu’s statement, to which he cautioned the MP never to undermine his authority.

“In Ghana, Parliament is not supreme it is subject to the constitution and so it is important that when the Speaker speaks from the chair, the leader of the house is not seen to be the one countering what the spokesperson of the arm of government says and if they want us to give documentary evidence of the non-funding of the house for this year, we will provide them. So, when I heard that a leader of the house has gone on air to say that what I said is not true, it saddens me. In response to what I said yesterday, the government proceeded to release money yesterday and there is evidence to that,” the Speaker fumed.

Some members of the Majority leadership including Majority Chief Whip, Frank Annor-Dompreh, corroborated the claims of Mr Kyei-Mensah-Bonsu, describing the Speaker as impatient for his outburst.

But the Speaker insists the money was only released after his lamentation.