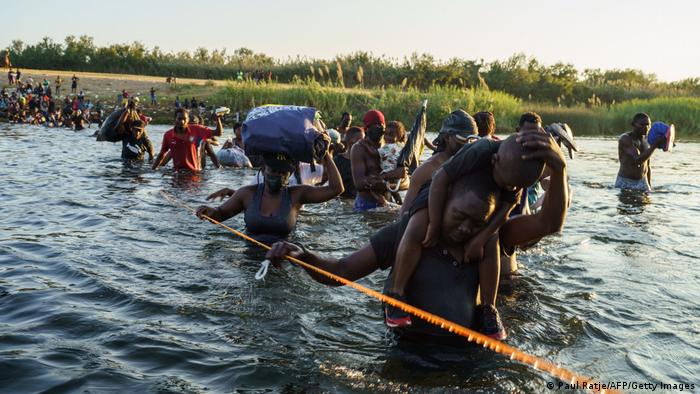 The US special envoy for Haiti has resigned in protest over the deportation of Haitian migrants.

The decision to return migrants fleeing an earthquake and political instability was “inhumane”, senior diplomat Daniel Foote said in a damning letter.

Last weekend, the US started deportation flights from a Texas border town where about 13,000 migrants had gathered under a bridge.

They have been waiting in a makeshift camp in temperatures of 37C (99F).

Local officials have struggled to provide them with food and adequate sanitation.

Since Sunday, the US has returned to Haiti 1,401 migrants from the Texas camp on the border with Mexico.

But in his resignation letter, Mr Foote said Haiti was a “collapsed state” that “simply cannot support the forced infusion of thousands of returned migrants lacking food, shelter, and money without additional, avoidable human tragedy”.

Since a devastating earthquake struck Haiti in 2010, many Haitians have left the country. A large number of those in the camp had been living in Brazil or other South American countries and travelled north after being unable to secure jobs or legal status.

This year has brought further hardship for the impoverished country. In July, President Jovenel Moïse was assassinated – and in August it suffered another deadly earthquake.

Images of horse-mounted US officers corralling the migrants have evoked dark comparisons to US slavery and the country’s historical mistreatment of black people.

The widely shared images, taken by an AFP photographer earlier this week, appear to show US Border Patrol agents on horseback using their reins against the migrants and pushing them back towards the Rio Grande river that divides Texas and Mexico.

That led to pressure on President Joe Biden’s administration, and prompted calls from within his Democratic Party to give the Haitians asylum rather than fly them back to their home country.

Mr Foote said Haitians needed “immediate assistance”, and criticised the US and other countries for interfering in the country’s politics.

“What our Haitian friends really want, and need, is the opportunity to chart their own course, without international puppeteering and favoured candidates but with genuine support for that course,” he said.

Mr Foote has served in the role since Moïse’s assassination in July.

A state department spokesperson thanked the ambassador for his work, and insisted that the US remained “committed to supporting safe, orderly, and humane migration throughout our region”.

But in a later statement, a department spokesperson hit back at Mr Foote’s claim he had been ignored by officials.

“It is unfortunate that, instead of participating in a solutions-oriented policy process, Special Envoy Foote has both resigned and mischaracterised the circumstances,” Ned Price said.

At the migrant camp on the Mexican border, teams of police and National Guard agents have “completely blocked off” the area, according to immigrant rights activist Jenn Budd, who is at the Del Rio site.

“They’re cleaning it up and getting rid of everything, and they have shut down access to the river itself.”

Separately, nearly 19,000 mostly Haitian migrants are in Colombia, waiting to cross the border with Panama on the journey to the US, officials say.

“We want them to let us cross, from here to Panama, before the United States closes its border,” one migrant said. “They are going to take away our dreams. I come from Peru, I’ve been struggling.”