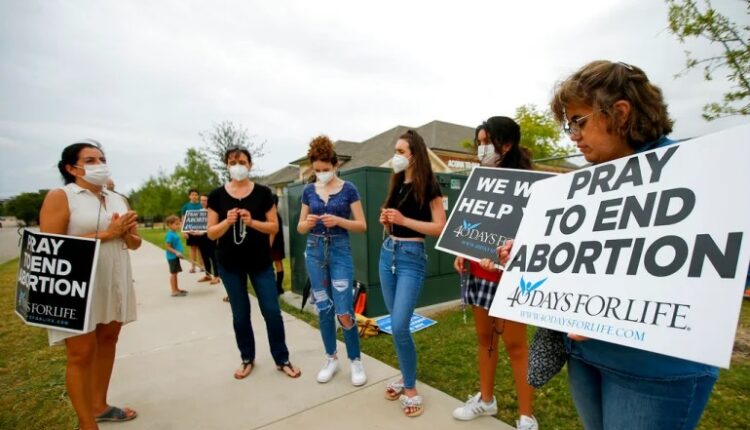 US prepares for Supreme Court showdown on abortion rights

In 1962, Barbara Lee was a 16-year-old student at San Fernando High School in Los Angeles, California.

She was the only Black girl on the cheerleading squad and an aspiring pianist who attended a Catholic church and earned top grades. But when she missed her period and realised she might be pregnant, all of that suddenly was at risk.

“I was confused, afraid and unsure, not knowing if I was pregnant or not. I didn’t know what to do,” Lee, now aged 75 and a prominent member of the US House of Representatives, recalled during a recent hearing in Congress.

Lee’s experience came just over 10 years before the United States Supreme Court legalised abortion nationwide in its landmark 1973 decision, Roe v Wade. It was a time when many women and girls were forced to take risky measures if they wanted to terminate their pregnancies.

Lee said her mother sent her to El Paso, Texas, in the care of a close friend who shepherded her to a “back-alley” clinic in Mexico to have an abortion. “I felt embarrassed and thought if anyone found out, my life would be destroyed,” she recalled.

Now, decades later, women’s rights advocates in the US say hard-fought abortion rights are at risk, as the nation’s top court is set to hear a Mississippi abortion case that could challenge Roe v Wade.

With a conservative majority, the US Supreme Court could be on the verge of overturning that historic decision – a prospect putting abortion at the centre of US politics and spurring mass protests across the country.

“We cannot and will not return to those days before Roe,” Lee said.

There is no federal law guaranteeing a right to an abortion in the US.

Instead, Supreme Court rulings starting with Roe v Wade sharply limit how states can regulate the procedure. That decision essentially holds that states cannot ban abortions before a fetus becomes viable outside the womb or at about 24 weeks.

But the makeup of the nine-member high court has changed decisively with the appointment of three conservative justices under former President Donald Trump.

The shift started at the end of President Barack Obama’s term in 2016, when conservative Justice Antonin Scalia died suddenly and Republicans in the US Senate refused to confirm Obama’s nominee to the court, arguing it was too close to the upcoming presidential election, which Trump won.

That swung the court from a 5-4 centrist majority to a 6-3 conservative one. Barrett’s appointment was the culmination of a long drive by anti-abortion advocates to place conservatives who would overturn Roe v Wade on the federal judicial bench.

Now, anti-abortion activists are hopeful the court will act, said Mallory Quigley, vice president at the Susan B Anthony List, a group that opposes abortion.

“The entire political strategy of the movement since the 70s has been to get the right people in elected office, both in the White House and in the Senate, to be able to appoint and confirm justices such as the ones that President Trump placed on the court,” Quigley said.

Roe v Wade, she told Al Jazeera, is a “profound judicial over-reach” that has “placed handcuffs on duly elected legislators at the state level being able to pass laws that reflect the will of the people”.

At the centre of the looming Supreme Court showdown is a case over a Mississippi law that bans most abortions after 15 weeks.

The Jackson Women’s Health Organization, the only licensed abortion clinic in the state, challenged the legislation as unconstitutional and won in US district court.

The state has appealed, and the Supreme Court, taking direct aim at Roe v Wade, has agreed to rule on whether restrictions on abortion like Mississippi’s are unconstitutional. Oral arguments are expected to be heard on December 1.

Texas recently enacted a law that effectively bans abortions at six weeks, often before a woman knows she is pregnant. The law also allows anyone to seek a $10,000 damage claim against a doctor or anyone else who helps in an abortion.

“The Texas law is a frightening kind of bounty-hunter law which gives anybody around the country the ability to challenge not only somebody having an abortion, but anybody who supports and facilitates in that,” said Marge Baker, executive vice president of People for the American Way (PFAW), a civil rights advocacy group.

As a result, many abortion clinics in Texas have stopped providing abortion services – and advocates have warned that Black and other women of colour, as well as members of low-income communities, will be most severely impacted. Large numbers of women are travelling to other states where abortion is still legal in order to get the procedure.

The US Justice Department has filed a legal challenge to the Texas law, and a US district judge ruled it was unconstitutional. But the conservative US Fifth Circuit Court of Appeals in New Orleans overruled the lower court, allowing the law to stand for now.

“This is a transformative moment,” Baker told Al Jazeera. “Voters are waking up to what a difference their vote makes to who sits on this courts, which has a huge impact on their lives.”

A clear majority of people in the US have supported abortion rights for decades, according to public opinion surveys, although it remains a contentious issue that sharply divides Americans along partisan lines.

Women’s rights advocates say the string of recent laws restricting abortion has made people realise that abortion rights are not guaranteed and pushed many into the streets. Tens of thousands of women marched at the US Capitol in Washington, DC, and in cities across the nation on October 2 to protest the new curbs.

“This is a critical time for women,” said Christian Nunes, president of the National Organization for Women (NOW), a grassroots feminist advocacy group founded in 1966 that champions abortion rights.

“When you talk about Roe v Wade, it was 1973. For the last 40-something years, this has been a right that women have just been afforded and they never really had to think about it,” Nunes told Al Jazeera. “Now for the first time in a very long time, we are seeing this right being taken away.”

Women’s advocacy groups including NOW, PFAW, the Women’s March Network, NARAL Pro-Choice America, Planned Parenthood and others are fighting back. “There is a huge coalition that is coming forward to really look at, how do we protect these rights on multiple different levels,” Nunes said.

The organisations are pushing for legislation to codify the Supreme Court’s rulings. One such proposed bill, known as the Women’s Health Protection Act, would guarantee women’s right to an abortion nationwide.

The bill passed the Democrat-controlled House of Representatives last month but faces roadblocks among Republicans in the US Senate. It is presently seen as unlikely to win passage before the upcoming 2022 mid-term elections.

Meanwhile, if the Supreme Court upholds the controversial new laws in Mississippi and Texas, advocates say abortion rights will be a central political issue in the months ahead. “There’s going to be enormous activism,” Baker said. “It is just a huge issue that is going to drive voters to the polls.”