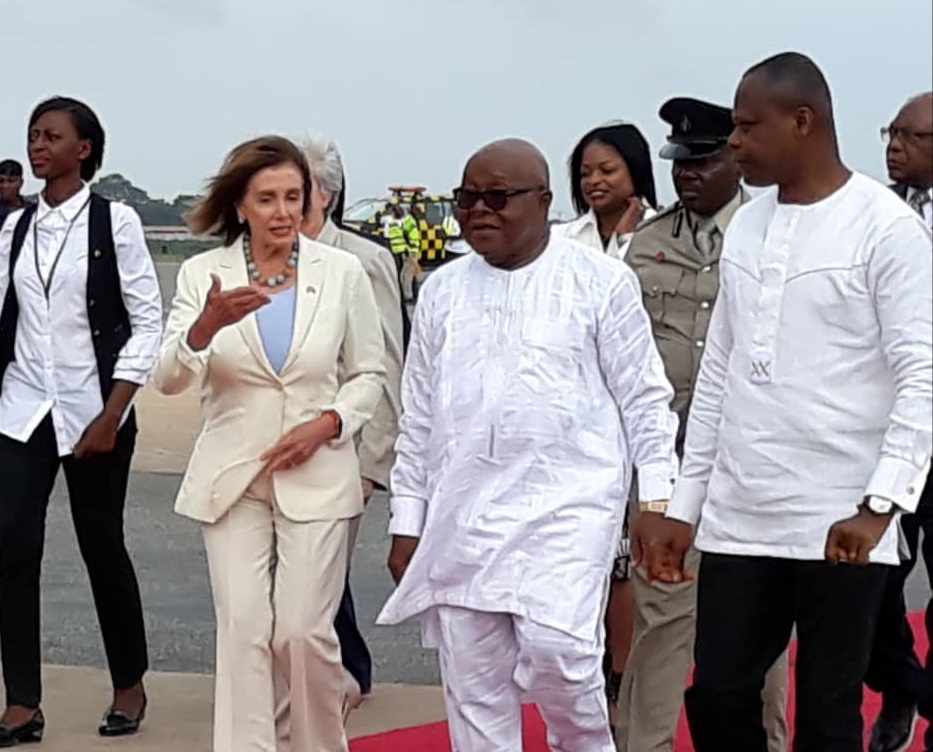 US Speaker Pelosi and delegation arrive in Ghana

The Speaker of the House of Representatives in the United States,\ Nancy Pelosi and a Congressional delegation arrived in Accra Sunday afternoon to hold high-level discussions with President Nana Addo Dankwa Akufo-Addo, Speaker of Parliament, Prof Mike Oquaye and other senior government officials.

They were met at the Kotoka International Airport by Prof Ocquaye, U.S. Ambassador to Ghana, Stephanie S. Sullivan, Ghana’s Ambassador to the U.S., Dr Baffour Adjei-Bawuah and some Members of Parliament, as well as other dignitaries.

As part of the 400th Anniversary of the First Enslaved Africans landing in America, the delegation whilst in Ghana will also pay solemn respects at the Cape Coast and Elmina Castles and the “Door of No Return.”

They will also lay wreaths at the Kwame Nkrumah mausoleum in Accra.

The visit coincides with this year’s PanAfrican Festival (Panafest) and Emancipation, which is on the theme: “Uniting the African family” with the sub-theme: “Beyond 400 years; Reaching across continents into the Future.”

their roots to their motherland, Africa, using Ghana as the gateway.

“In Ghana, our delegation looks forward to high-level discussions on key issues such as regional security, sustainable and inclusive development and the challenges of tomorrow including the climate crisis,” Speaker Pelosi said, according to a press release issued by the Public Affairs Section of the United States Embassy in Accra.

“It is a special honour to be the first U.S. Speaker of the House to address the illustrious Parliament of Ghana, as we build on the partnership between our nations,” she added.

“As the founding chair of the International African American Museum, which is being built on Gadsden Wharf in Charleston, South Carolina where approximately 50 percent of enslaved Africans arrived in this country, it is particularly meaningful to me to join the first woman Speaker of the U.S. House of Representatives and many of my African American colleagues in visiting Ghana’s Door of No Return,” said Majority Whip Clyburn.

“I consider this to be a fitting and proper way to commemorate the 400th year since the enslaved people were forced to leave their homeland and sent in bondage to the New World. I seek to pay homage to the sacrifices of our African ancestors and honour the contributions they made to building the United States of America,” Mr Clyburn added.

“400 years ago this year, our ancestors were first brought to this continent in chains. On this delegation, 12 Members of the Congressional Black Caucus will return to the African continent as Members of the United States Congress,” said Congresswoman Karen Bass, Foreign Affairs Committee and Judiciary Committee,

“We have come so far but we still have so far to go. Among the history being made this trip, I am very much also looking forward to witnessing the first woman Speaker of the United States House of Representatives address the Ghanaian parliament. I thank Speaker Pelosi for leading this important trip and for joining us in sending a signal of mutual respect and partnership to Ghana and the continent of Africa as a whole,” she added.

Ms Pelosi is the 52nd Speaker of the House of Representatives in the US, having made history in 2007 when she was elected the first woman to serve as Speaker.

She made history again in 2019 when she regained her position second-in-line to the presidency, the first person to do so in more than 60 years.