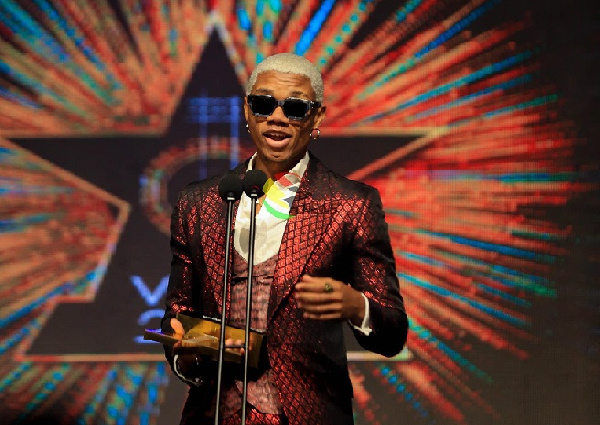 After waiting for 365 days, KiDi is finally back to win the ultimate award of the night at the just-ended 23rd Vodafone Ghana Music Awards (VGMA).

He was adjudged the Artiste of the Year, and Twitter was blazing.

After failing to win the award in 2021 and his famous ‘I’ll be back’ phrase, the musician returned to win his first-ever Artiste of the Year Award.

“Delay is not denial, Glory be to God,” KiDi stated as he accepted his medal on the night. I’d like to express my gratitude to MTN Hitmaker for exposing me to Ghana. Ghana, thank you very much to the media, my fans, my friends, my big guy Zane, and my mother.”

KiDi swept multiple awards on the night, especially with his hit song ‘Touch It’.

In all, he had four awards to emerge as the ultimate winner.

The year has been a big success for KiDi as he was also adjudged Artiste of the Year at the 3Music Awards held in March.

Some social media users have congratulated him on his feat.

Below are some comments:

Kidi deserved the most popular song of the year and also Artiste of the Year. Congratulations to him 🥳🥳💥 pic.twitter.com/DCwWWCpIwj

Kidi deserves the Artist of the year. when Black Sherif combine all his songs streams+FT’s self he no go fit Kidi Touch it. stop ranting. #VGMA23 AOTY / eugene / Camidoh pic.twitter.com/1KH6AumYon

Whoever say KiDi no deserve artiste of the year, ebi your opinion that. Keep am!! We no won hear am. Abeg!! #VGMA23

Good start for Blacko. But Kidi deserves this award.
Next year is for Blacko and no one can stop that. We are traveling!!!!

congratulations to kidi the lover for winning 🥇 the artist of the year. kidi has really been phenomenal since his arrival, he really deserves this.#VGMA23 #VGMA #VGMAonTV3 pic.twitter.com/l60OEil98N

Like KiDi for win AOTY back to back sef. Two years of consistently releasing albums with bangers. Nobody deserves it than him!!!

Although my man Blacko worked but kidi did a great job which shows he deserve the artist of the year.

Watch out for Blacko next year,we are taking it at both 3Music and VGMA #VGMA23

He made a project with Tyga and you’re saying Kidi didn’t deserve this award..y’all must be joking #VGMA23

Kidi over all artise of the year congratulations 👏👏👏#VGMA23 pic.twitter.com/y5ae3V5xHB

The other nominees were all great equally deserved it, especially Black Sheriff – Blacko and Kuame Eugene.

Back-to-back . Congratulations to Kidi ❤️. He really deserved it . pic.twitter.com/WRboz3rMMy