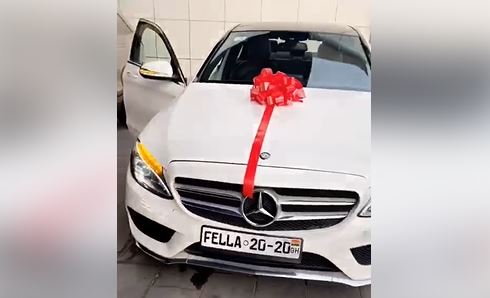 A Ghanaian rapper, Medikal, has bought a brand new Mercedes Benz for his wife, Fella Makafui.

They have had to suspend their white wedding following the outbreak of COVID-19 in the country.

In a video shared Medikal’s social media pages, he was heard saying “I bought my baby a brand new whip”.

His wife, Fella Makafui who could not hide her excitement was seen crying behind the steering wheels of the customized White AMG Mercedes Benz.

The traditional wedding ceremony saw about military officers in their numbers armed to the teeth performing ‘duty’ at the event grounds.

They were, however, arrested by the Military police after it emerged they were there on their own accord and not dispatched there to perform an official duty.

Soldiers arrested for performing ‘duty’ at Medikal and Fella’s wedding