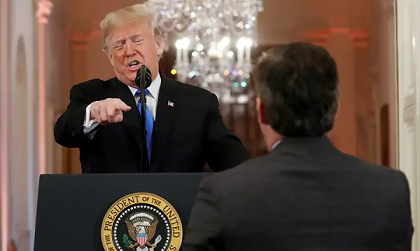 The White House has suspended the press pass of Jim Acosta, the CNN reporter embroiled in an argument with Donald Trump during Wednesday’s post-midterms press conference, “until further notice”.

Mr Acosta had “placed his hands on” a female aide trying to retrieve a microphone at the request of the president as the pair clashed over Mr Acosta’s repeated questioning, press secretary Sarah Huckabee Sanders claimed in a statement posted to Twitter.

The CNN reporter tweeted in response: “This is a lie.”

Ms Sanders said: “President Trump believes in a free press and expects and welcomes tough questions of him and his Administration. We will, however, never tolerate a reporter placing his hands on a young woman just trying to do her job as a White House intern.

“This conduct is absolutely unacceptable. It is also completely disrespectful to the reporter’s colleagues not to allow them an opportunity to ask a question. President Trump has given the press more access than any president in history.

I see this press conference couldn’t be going better.

“Contrary to CNN’s assertions there is no greater demonstration of the president’s support for a free press than the event he held today. Only they would attack the president for not supporting a free press in the midst of him taking 68 questions from 35 different reporters over the course of 1.5 hours including several from the reporter in question.

“The fact that CNN is proud of the way their employee behaved is not only disgusting, it‘s an example of their outrageous disregard for everyone, including young women, who work in this administration.

“As a result of today’s incident, the White House is suspending the hard pass of the reporter involved until further notice.”

Video of the incident posted by CNN showed Mr Acosta attempting to retain the microphone while questioning Mr Trump on his immigration rhetoric and Robert Mueller’s investigation into alleged collusion with Russia.

As the female aide tries to take it from him he can be seen to briefly block her arm with one hand.

Mr Trump has long feuded with CNN and accused it of peddling “fake news” – the channel is one of his favoured punching bags. During the ill-tempered press conference on Wednesday he singled out Mr Acosta as “rude”.

He has also threatened to revoke the broadcast licences of outlets whose content he dislikes, and stoked anger against journalists by denouncing them as the “enemy of the people”.

Speaking on CNN to colleague Anderson Cooper, Mr Acosta said: “I was just trying to ask a question of the president. It was obviously a question they didn’t like.

In a statement, CNN said the revocation of Mr Acosta’s credentials “was done in retaliation for his challenging questions at today’s press conference”.

The company said Ms Huckabee Sanders had “provided fraudulent accusations and cited an incident that never happened”. It added: “This unprecedented decision is a threat to our democracy and the country deserves better. Jim Acosta has our full support.”