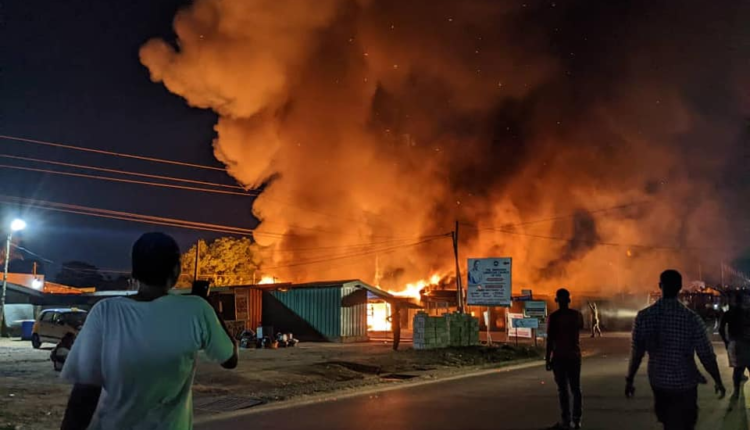 The weekend was busy for the Ghana National Fire Service (GNFS) as they battled four fire outbreaks at separate locations in the capital, Accra.

The first occurred on Saturday morning at Achimota Mile 7, while the second was recorded later that same day at the Darkuman Post Office area.

On Sunday, there was a fire outbreak at the Cocoa Marketing Board (CMB) /Abuja Market enclave and another at Agbogba.

The GNFS stated that about 30 wooden structures were destroyed together with 50 metal containers used for commercial purposes in the inferno at the Mile 7 market.

“The stout efforts of the combined team brought the ferocious fire under control at 0318 hours. The crew finally succeeded in knocking the ruinous fire out at 0515 hours to save other surrounding residential structures and the Mile 7 Post Office from any fire damage. The fire cause is yet to be determined. Fortunately, no casualty was recorded,” the GNFS explained in a post on Facebook.

At Darkuman, the firemen had a tough time as an unknown boiling substance at the scene hindered firefighters from advancing to the fire scene because the contents of the burning area were not readily known.

However, they managed to douse the flames after several hours under the supervision of the Chief Fire Officer and the Accra Regional Commander, who were at the scene.

Due to the hazardous nature of the contents at the fire scene, one fireman suffered an injury and was rushed in an ambulance to the police hospital for treatment.

The next day, another fire erupted around the Cocoa Marketing Board (CMB)/Abuja Market area near Katamanto but was immediately put out by the Accra Central Fire Department.

Three fire tenders were dispatched to stop the fire from spreading and causing further damage.

In the Agbogba incident, several fire tenders had to be dispatched from  Madina and Adenta to fight the inferno.