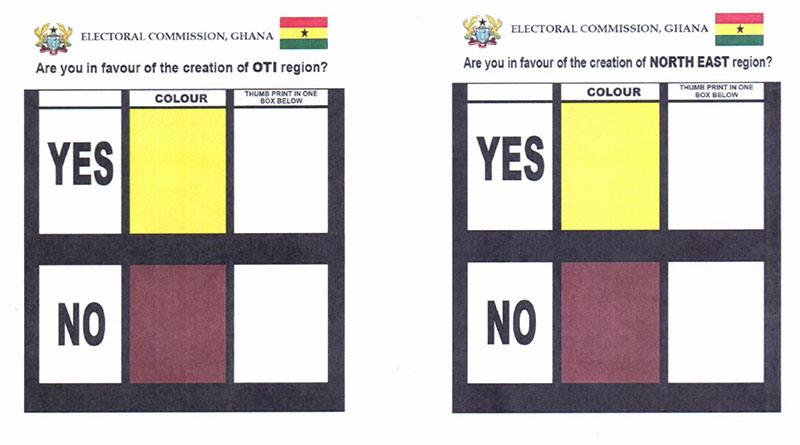 Vote ‘No’ in referendum – Chamber for Local Governance

The Chamber for Local Governance (ChaLoG) has spoken against the impending introduction of partisanship into Ghana’s local governance system.

On Friday, the Association called on Ghanaians to vote No in the upcoming Referendum to ensure that the local government system remained non-partisan.

According to the Ghana News Agency, ChaLoG explained that voting ‘Yes’ would politicise the local governance system against the entrenched clause Article 55(3) of the 1992 Constitution.

The clause states that: “Subject to the provisions of this Article, a political party is free to participate in shaping the political will of the people, to disseminate information on political ideas, social and economic programmes of a national character, and sponsor candidates for elections to any public office other than to District Assemblies or lower local government units.”

They noted that Ghana is not ready for the introduction of fully blown partisan politics at the local government level adding that, a Yes vote would have dire consequences including; increase in corruption.

“To obviously defray the expenses incurred in having to go through the various processes if political parties are involved as opposed to the only one stage of soliciting votes directly from the electorate devoid of the payment of filing fees,” the statement stated.

According to the statement, the amendment would also lead to the politicisation of development projects as they said they have heard on many occasions, that appointed MMDCEs deliberately delayed the release of the District Assemblies’ Common Fund to Members of Parliament belonging to the opposition party.

They stated that against this background, GhaLoG foresees massive politicisation of basic development projects within districts and electoral areas across the country as they believed MMDCEs would most likely favour Assembly Members who belonged to their political parties in the allocation of financial resources.

“A Yes vote for the amendment,” they said would lead to a dip in revenue mobilisation of the Assemblies as any action taken against a business or property owner would be deemed to be an attack on them especially if they belonged to the opposition.

Other consequences they mentioned were power-play between opposition Chief Executive Officers and Coordinating Directors and political interference in the work of MMDCEs and power play between them and MPs.

ChaLoG, therefore, called on Ghanaians to turn up in their numbers on Tuesday, December 17, 2019, to reject the proposal to amend Article 55(3) by voting NO (Dark Brown Colour) to keep Ghana’s local government system non-partisan for a total and holistic development in the various MMDAs devoid of partisan politics.