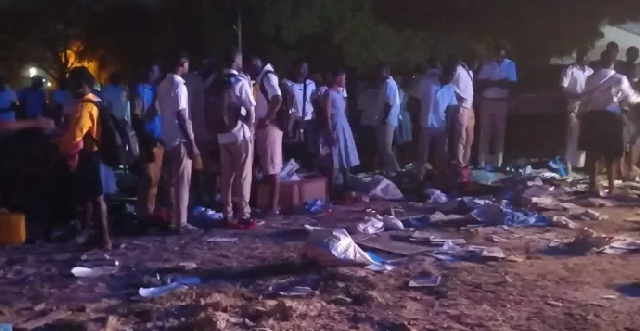 Fourteen Wa Secondary Technical High School students have been hospitalised after a fire outbreak that gutted parts of the girls’ dormitory.

The students reportedly suffered trauma after two separate fire incidents at the school.

One student is receiving treatment at the Upper West Regional Hospital, while 13 others have been admitted to the Wa Municipal Hospital.

The Ghana Education Service (GES) has said the affected students are receiving counselling as a form of psychological support.

The Upper West Regional Director of Education, Abdul-Razak Korah, disclosed that management has decided to temporarily close down the school to allow for a thorough investigation into the two fire outbreaks on the evenings of Sunday and Monday.

He added that the GES would bear the cost of transporting the students to their various homes.

The fire started around 8 pm on Sunday, January 22.

The inferno destroyed five rooms and the girls’ belongings in one of the story dormitory blocks.

It took the intervention of the Ghana National Fire Service(GNFS) personnel to control the disaster, thereby preventing the fire from destroying an entire building.

However, another fire occurred in the school on Monday, January 23, 2023.

The cause of the fire is not immediately known.

The GNFS has, however, commenced investigations into the incident.