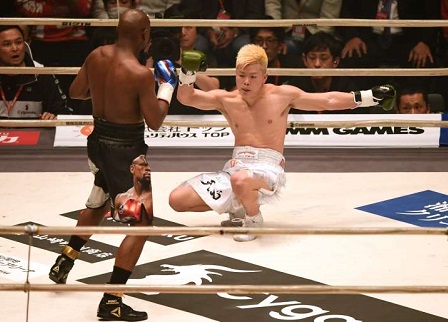 How quick? 139 seconds, in a Tokyo-area exhibition match Monday against Tenshin Nasukawa. The Japanese kickboxing sensation was knocked down three times in the first round before his corner threw in the towel.

Mayweather, 41, has claimed on social media that he was making $9 million in Japan. In an interview after the fight, he said that the event was “all about entertainment” and that he was “still retired.”

Nasukawa, just 20 years old but in possession of a 28-0 record in kickboxing and a 4-0 mark in MMA, was reportedly left in tears at the result. There were no official judges for the fight, which was staged under boxing-only rules that reportedly included a stipulation that Nasukawa would be subject to a $5 million penalty if he were to kick Mayweather.

The fight began after a lengthy wait for Mayweather to emerge at Saitama Super Arena, providing reason for some to wonder if he would show up at all, given the uncertainty over the event. News of it had emerged in November, with the fight initially presented as if it were an official contest for which Mayweather would come out of retirement, much as he did in August 2017 to take on Conor McGregor.

Watch highlights of the fight below;

However, Mayweather quickly claimed that he “never agreed to an official bout” and instead was under the impression that he was going to participate in an “exhibition” match in front of a “small group of wealthy spectators.” Eventually, he confirmed that the fight would take place, telling TMZ Sports, “I’m moving around with the guy for 9 minutes, and of course it’s gonna be the highest paid exhibition ever.”

Once he entered the ring, Mayweather appeared to be taking the bout lightly, smiling at Nasukawa and flicking a few halfhearted punches. Soon, though, Mayweather went on the attack and was able to land several clean, hard shots that sent Nasukawa sprawling to the canvas.

“It was all about entertainment. We had fun,” Mayweather said of the event (via ESPN). “I’m still retired. I don’t look forward to coming back to boxing.

“I did it just to entertain fans in Japan. I’m still retired, I’m still 50-0, and Nasukawa is still undefeated and a hell of a fighter.”

Having started his professional career at 16, Nasukawa has quickly become popular in Japan while building his undefeated record. However, he has been fighting at 121 pounds, whereas Mayweather has usually fought at around 150. Their size difference was notable Monday.

Mayweather retired after defeating Andre Berto in September 2015, but he returned to take on McGregor, the UFC superstar who was in his first officially sanctioned boxing match. Mayweather won by technical knockout in the 10th round, pushing his record to 50-0.

Mayweather’s comments after the Nasukawa fight could dampen speculation that he might come out of retirement again to take on the winner of a bout in January between Manny Pacquiao and Adrien Broner. Mayweather scored a unanimous-decision win over Pacquiao in a lucrative fight staged in May 2015.