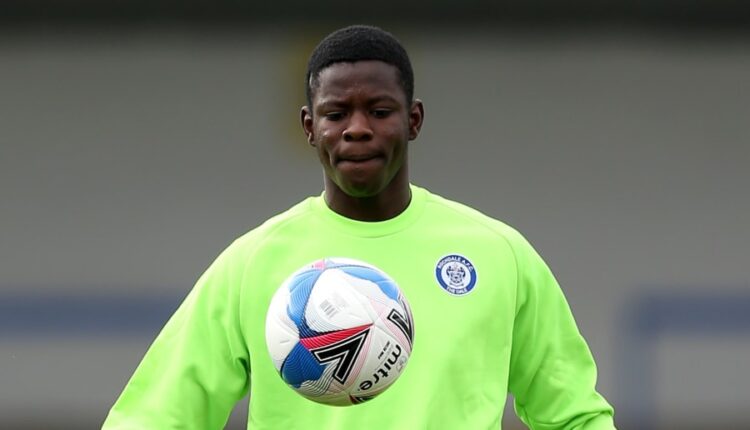 The youngster is joining the Hornets on a five-year contract from League One side AFC Rochdale ahead of their 2021/22 English Premier League campaign.

Baah is considered to be a very highly-rated attacking midfielder or striker that has made huge strides forward under Rochdale boss Brian Barry-Murphy this season and has been linked with a number of Premier League clubs.
Following the announcement, he becomes the first signing of Watford since the club secured promotion back to the Premier League last weekend.

✍️ We are delighted to confirm the signing of highly-rated youngster Kwadwo Baah from Rochdale on a five-year contract.@_AFEX

Baah featured for the English third-tier side AFC Rochdale for the 2020/21 season and scored three goals and provided two assists in 33 appearances.

He was named the EFL Young Player of the Month for January and has become one of the rising stars in England in the past year.

The talented forward was born in Germany to Ghanaian parents but was raised in England which makes him eligible to feature for either Ghana, Germany, or England in the future.

Already, Baah has made his debut for England Under-18s during a 2-0 win against Wales in Cardiff in March 2021.

Baah enjoyed a brief taste of fame in October 2016 as a Palace ballboy when he ran onto the pitch and put down the ball for a goal-kick in an attempt to stop West Ham’s goalkeeper from time-wasting.
He was released by Crystal Palace at the age of 14 but was given a second opportunity by the Kinetic Academy in south London, who helped Baah to sign a scholarship at Rochdale in September 2019.
Story By kobby Asamoah/ k.boahene@theghanareport.com
Ghanaian players abroad
You might also like
Sports

Local coaches are not respected by Ghana FA’s Executive Council –…