We didn’t scrap the law on road tolls – Ministry clarifies

The Ministry of Roads and Highways has explained that a directive issued by the sector minister to stop road toll collection was not to abolish the laws backing tolls in the country.

However, the daily demand for tolls at the booths before vehicles were allowed passage had to be halted to prevent chaos following a proposal to have it removed.

Finance Minister, Mr Ken Ofori-Atta, tabled the suggestion for the removal of road tolls in the 2022 Budget and Economic Policy presented to parliament on Wednesday, November 17.

It was to take effect after the budget had been approved by the House.

According to the Ministry of Roads and Highways, “the Minister of Finance’s statement either got misunderstood or misinterpreted by some motorists, as many of them deemed the statement as having immediate effect and therefore decided not to pay the road and bridge tolls. The insistence of the toll collected to have the tolls paid caused serious confusion and in some cases, resulted in fisticuffs and damage to lives and property”.

“The Ministry is aware of Parliament’s role in the imposition taxes and the fixing of levies and charges and in the fullness of time, the appropriate thing would be done,” the statement added.

The release was to offer clarification after the Speaker of Parliament, Mr Alban Bagbin, threatened Mr Kwasi Amoako-Atta, with contempt.

The Speaker explained in parliament that Mr Amoako-Atta erred by issuing a statement to scrap road tolls without greenlight from the legislature.

For him, it is “quite right to direct the minister – in fact, a senior member of this House, he’s not a junior member – who is used to all this and I think that he might have reacted wrongly and, therefore, I call on him to honourably withdraw that directive”.

“Failure to do so will be a serious breach of the directive of the Speaker and that could amount to contempt of parliament”, he warned.

Mr Amoako-Atta took the action even before parliament could get a chance to debate the budget.

Following his statement, toll operations came to a halt at major areas such as the Accra-Kasoa Highway and the Tema Motorway on Thursday. 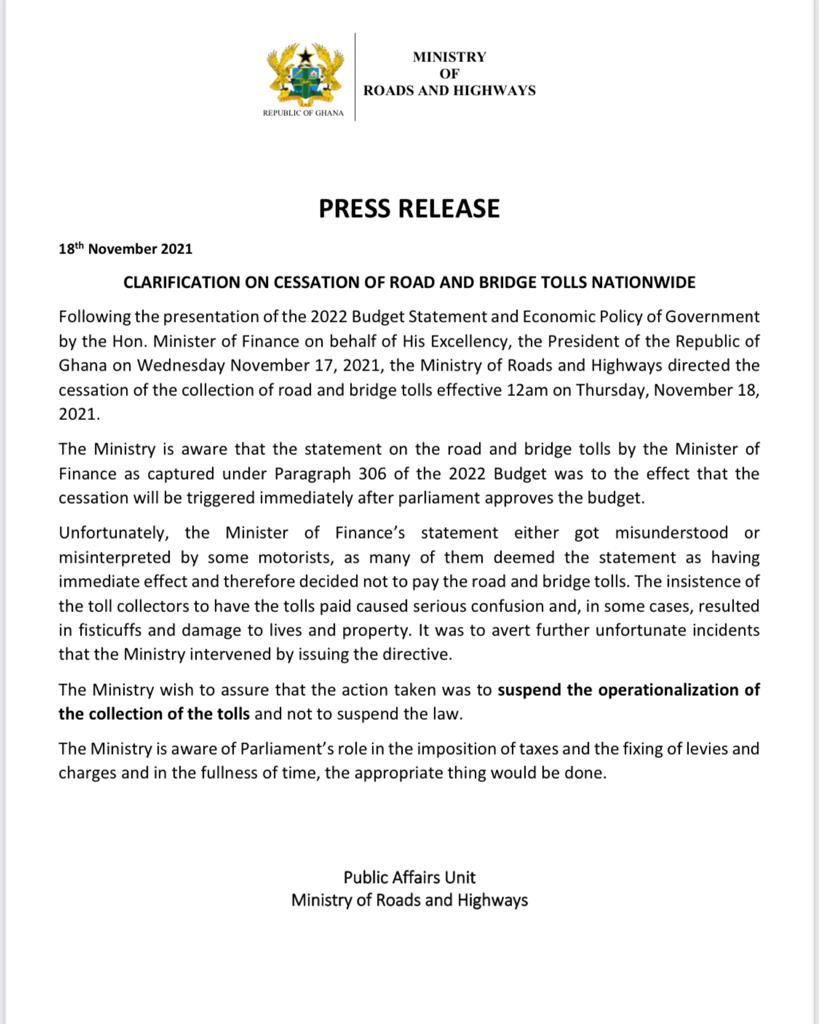 Why did the Speaker issue the order to the Transport Minister?

The Speaker of Parliament explained, “Until this budget is approved, all that is contained in the budget are proposals; we (House) have the authority to approve but they (Executive) have been given the authority, pursuant to Article 170 (9) to prepare and lay before the House”.

“Until they are approved, nobody; and I mean nobody has the authority to start implementing something that doesn’t exist”, he insisted.

Mr Bagbin pointed out that the Minister of Roads and Highways “might have misunderstood or misapplied the law and, so, it’s for us to draw his attention and tell him that: ‘You have no such authority’”.

He added that “the executive cannot just, on their own, suspend the implementation of the law without coming back to the House. That is not democracy. That will be a one-man rule. And, so, I want to clearly direct that what the minister has released is an empty boast; it has no effect”.

The Speaker issued the directive after the Minority Leader, Mr Haruna Iddrisu, had raised red flags about Mr Amoako-Attah’s actions.

Citing paragraph 247 on page 60 of the budget statement, he pointed out that the Minister of Finance categorically stated that the charges on all road tolls will be removed “immediately the budget is approved by parliament.”

He was, therefore, convinced that the conduct and directive of the roads minister was “an attempt to usurp the power of this august House.”