President Nana Akufo-Addo has lauded the late former President Jerry John Rawlings for being a wise counsel to him in the last years before he died, even though the two were political opponents for many years.

In a glowing tribute by President Akufo-Addo on Wednesday, January 27, at the burial of the former President Rawlings, Nana Akufo-Addo said the rift between the two of them was no secret as “we did not see eye to eye”.

Former President Rawlings, who was the military leader of the Provisional National Defence Council (PNDC), became the founder of the National Democratic Congress (NDC) and started the Fourth Republic of Ghana.

President Akufo-Addo, on the other hand, was a prominent member of the New Patriotic Party (NPP), the main political opponents of the NDC.

Mr Akufo-Addo recounted his days in politics from 1979 through to “my brief period in exile”.

“The historic ‘Kumi pr3ko’ demonstrations, my period as Attorney General and Minister for Foreign Affairs, in the Kufuor administration. Indeed, my election as 2008 NPP presidential candidate was one of open animosity”, he recalled.

President Akufo-Addo was thankful that things changed after former President Rawlings retired after his second term under constitutional governance.

“We came to see value in each other and understood to a very large degree, our respective perspectives. One thing we had in common was our mutual commitment to public service, my visit to his Ridge residence in 2012 signified the easing of tensions between us, leading to a friendship that lasted for the better part of some eight years,” President Akufo-Addo added.

He further stated that one of the first persons on whom he paid a courtesy call after winning the 2016 presidential elections was former President Rawlings.

“From my entry into office right up to the day he was called by his maker he remained a good friend and a repository of sound advice. I knew that in moments of difficulty in my presidency, I could count on his considerable wealth of experience and knowledge. On those occasions, he came through for me. It was a symbolic gesture,” he acknowledged.

Former President Rawlings further expressed affection for President Akufo-Addo at the time he was mourning the death of his mother in October 2020.

On that occasion, President Akufo-Addo said Jerry was called out by the clergy to receive special prayers, as the only surviving son.

However, the ex-president told the men of God to wait and “called for me and he walked up to me to receive the special prayers”. 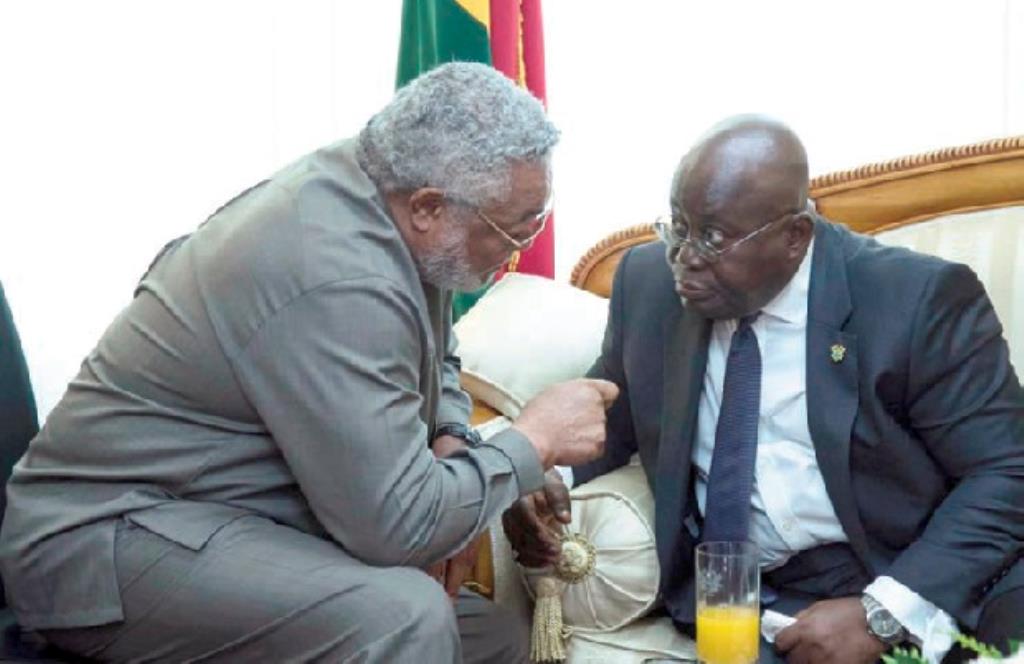 “He whispered to my ears as I stood beside him, ‘I reminded them that they should pray for you also because you had also lost your mother’”

“I was touched by this,” President Akufo-Addo underscored.

After a four-day-long state funeral, he is expected to be buried at the Military cemetery in Accra after the government and his family reached an agreement on the location of his burial.

‘Kumi pr3ko’ literally means ‘You may as well kill me instantly’ in the Twi language. It was a name given to an anti-government demonstration that occurred in 1995, led by Dr Charles Wereko Brobbey and Nana Akufo-Addo and some prominent members of the NPP.

The protest took place in opposition to the Value Added Tax (VAT) initiative which was introduced under the Jerry John Rawlings administration.

The demonstration was initially billed as a peaceful protest but quickly became violent when unidentified assailants shot live bullets into the crowd resulting in the deaths of a few protestors.

The animosity described by Mr Akufo-Addo in 2008 reached its peak when Mr Rawlings used derogatory words against Mr Akufo-Addo who was elected as flagbearer of the NPP at the time.

At the Manhyia Palace in Kumasi with the Asantehene Otumfuo Osei Tutu II and other chiefs present, Mr Rawlings caused a stir whilst urging the electorate to critically access the eight presidential aspirants vying for the highest seat of the land before making a choice.

“Whether Prof. Mills or that short man, what is his name, Nana Akufo-Addo, the electorate should watch against politicians who fabricate deceit and lies and rather vote for the one who is imbibed with integrity to lead the country,” he said.

That animosity found its expression after Nana Akufo-Addo discontinued privileges enjoyed by Mr Rawlings, as a former president, in 2002.

The courtesies were withdrawn by the then NPP government, specifically by the Foreign Affairs Minister and current president, Nana Addo Dankwa Akufo-Addo.

The Ministry said in September 2002 that it turned down a request by Rawlings to grant him courtesies on a planned trip to Washington DC.

A letter dated September 11 and signed by Akufo-Addo, Foreign Minister, in response to a request made by Rawlings’ Special Assistant at the time, Victor Smith, said; “it is not possible at the moment for Government to grant the requests in your letter.”

The letter added: “It makes little sense to continue to accord courtesies to someone, who persistently refuses to reciprocate them, as his recent utterances in Nigeria vividly illustrate. Accordingly, it is not possible at the moment for the government to grant the requests in your letter”.

Four years later, in 2006; the courtesies were restored and communicated via a letter signed by Akufo-Addo. He explained that the decision was among others to improve the political ambience at the time.

“Government is of the view that the time is now ripe to restore these courtesies in the expectation that this gesture will help not only to reinforce the dignity of the status of a Former President of Ghana but also to improve the political atmosphere in the country,” Akufo-Addo said.

Typical presidential courtesies include sending officers of Ghanaian High Commissions and Embassies to the airport to meet him any time Rawlings was visiting the particular country and according to him, all the necessary courtesies given to visiting high-ranking government officials.

During the meeting between the two leaders at Ridge, Mr Rawlings said, “We won’t be hearing the ‘tiatia’ (Twi word for short) anymore as the two patched up.

Mr Akufo-Addo said the meeting was to address their differences and Mr Rawlings also highlighted come concerns including corruptions and underdevelopment in the country.