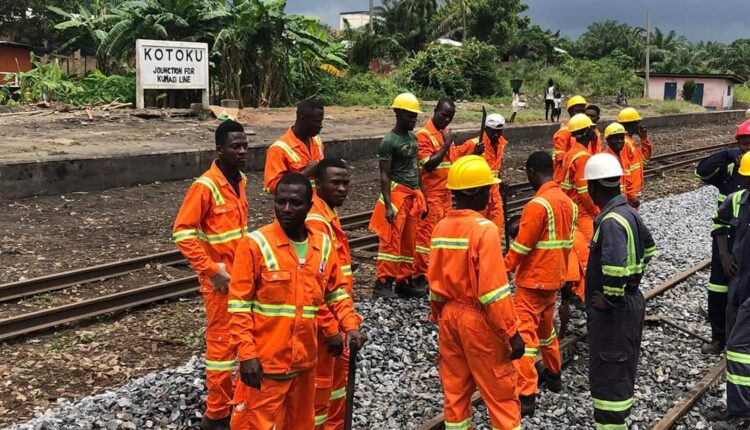 The Railway Workers Union has threatened to lay down their tools from 22 August 2022 because of mismanagement at the Ghana Railway Company Limited (GRCL).

The union’s concerns have been with the growing influence of the Ghana Railways Development Authority(GRDA) in the company’s affairs.

The union has called for a review of the Railway Act, Act 779, which postulates that its assets be entrusted to the care of the Ghana Railways Development Authority.

“The Railway Workers Union has over the years complained about the Railway Act, Act 779, which among other things, transfers the Assets hitherto under the care of GRCL to GRDA. Series of appeals for this Act, to be reviewed, since GRCL continues to be a going concern has so far not yielded the desired results,” it said in a statement.

It added that as a result, the GRDA has taken undue advantage of this Act and is perpetrating acts that are detrimental to the survival of GRCL.

They outlined some of the actions taken by GRDA, which are damaging to the growth of GRCL.

“A recent directive to take over some bungalows at Kumasi by 31 August 2022 in spite of the fact that officials of GRCL and their families occupy such Bungalows”.

“Denying the GRCL from collecting rents on the operators who are on railway lands as previously being done by GRCL”.

“Attempting to load and dispose of scraps of rails and sleepers at Kumasi railway station on 9 August 2022 something the railway workers at Kumasi fiercely resisted and it’s hanging currently,” the statement outlined.

The union asserts that the GRCL is heavily indebted to banks and other partners.

“Currently, the GRCL is heavily indebted to a number of institutions as it sometimes borrows from the Banks and its major client the Ghana Manganese Company to effect payment of salaries and purchase of fuel etc.,” the statement explained.

The union says it arrived at this decision because GRCL feels neglected, and the centre can no longer hold.

“The GRCL could have taken advantage of the sale of scraps and collecting of rents etc. to support its operations if the assets were to be in its care”.

“In view of the foregoing, the leadership of the Union is left with no option than to say enough is enough and thereby will be acting soon”.

“If the Ministry of Railways Development does not call GRDA to order and ensure an amicable solution to the challenges enumerated above, which the Ministry is already aware of, as well as other challenges, the two passenger services, i.e. Accra to Tema and Takoradi to Kojokrom, will from Monday 22 August 2022 seize running as we can no longer borrow money to support such operations,” the statement said.