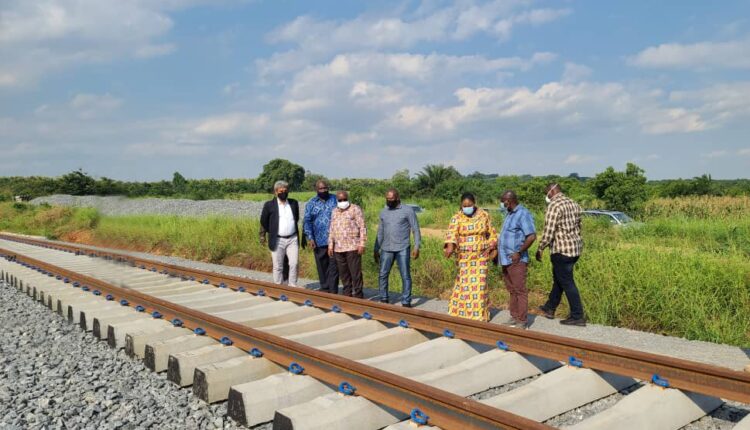 ‘Western Railway line to be completed on schedule’

Efforts are underway to complete sections of the Western Railway Line from Takoradi Port to Huni Valley in the Western Region within the scheduled 24-month period.

Already, the construction works on a section of the project up to Nsuta is near completion for the transportation of minerals to the Port of Takoradi by rail rather than using the road network.

The government in August 2020 secured a €523-million credit facility from the German Development Bank, Deutsche Bank, to finance the project.

“The development of the Takoradi Port to Huni Valley Railway Project, which has a 42-month construction period, has commenced.

“Efforts are being made to speed up the construction works to complete a section of the project up to Nsuta for the transportation of minerals to the Takoradi Port by rail rather than using the road network,” the Minister of Finance (MoF), Ken Ofori-Atta, said in the presentation of the 2023 Budget in Parliament.

He said the construction works commenced in June 2022 for the 78km section of the Western railway line from Manso to Huni Valley and includes the conversion of the narrow-gauge line between Kojokrom and Takoradi, as well as an extension of the standard gauge line into the newly expanded Takoradi Port.

He stated that this was to ensure the existence of a seamless means of hauling minerals and other bulk freight along the western corridor using the new standard gauge railway line.

According to him, civil works have commenced for the development of a new six-kilometre standard gauge railway line in Kumasi as part of the western railway development project to help in addressing the congestion being faced within the Central Business District, particularly, between Adum and Kaase.

He said having addressed the initial challenges with encroachments on the right of way, the development of the Adum to Kaase railway line was expected to progress significantly in 2023.

Mr Ofori-Atta stated that an improved passenger rail service was reactivated on the Accra-Tema section of the existing narrow gauge Eastern Railway Line after the service went dormant in 2020 due to the coronavirus (COVID-19) pandemic.

He said maintenance works were ongoing in order to restore passenger operations on the Achimota to Nsawam section.

He said the Tema to Mpakadan standard gauge railway line project was gradually nearing conclusion following the completion of major components of the project, including the 300-metre rail bridge across the Volta River, maintenance facilities, passenger stations and freight yards, signalling and telecommunications.

He added that works at the Mpakadan rail terminal were expected to be completed before the end of the second quarter of 2023, by which time delivery would have been taken of the rolling stock, for testing and operation of the new standard gauge railway line.

The minister noted that the government was investing in the development of local capacity to maintain the railway system in order to sustain it for the benefit of future generations.

He said following the upgrade of the old Railway Training School in Sekondi, now known as the UMaT School of Railways and Infrastructure Development, the facility had since 2021 enrolled over 1,000 youth in various engineering and ancillary programmes.

He said the government was also upgrading the old Railway Workshop Complex at Sekondi to strengthen local capacity for the repairs and maintenance of locomotives, wagons, coaches and ancillary railway equipment for the efficient operation of railway services in the country.

In 2023, the minister said the government would continue to develop local human resources and technical capacity for the maintenance of the railway system through the construction and equipping of workshops and providing practical hands-on training to youthful Ghanaians.

“All these efforts are aimed at creating the needed jobs and wealth to support the growth of our economy. In 2023, the construction of the 22km Kojokrom-Manso section of the Western Railway Line and the 97.97km Tema-Mpakadan Railway Line is expected to be completed and operationalised.

“These will be the first standard gauge railway lines to be operated in Ghana,” he added.