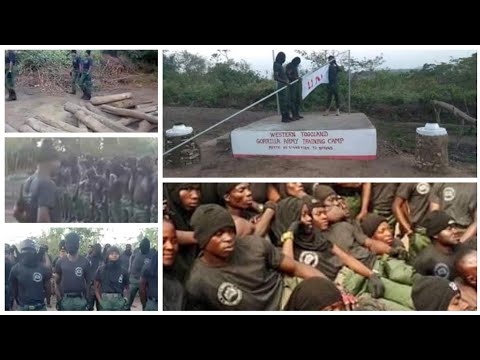 He said it was worrying that the country’s security system could not project that the leaders of the Homeland Study Group Foundation (HSGF), which has been agitating for an independent western Togoland, will take such an action.

The retired senior military official noted that there were signs on the wall that the group will try to militarise once they had attempted to roll out other symbols of nationhood including a currency, flag, national anthem.

“Being a state comes with certain status symbols… you could easily have projected that they were going to have some kind of military group,” he observed.

He was reacting in a Citi News interview monitored by theghanareport.com which suggests that some 2000 people had graduated from a military camp established by the group.

“If any type of persons can assemble on the sovereign territory of Ghana and can train and graduate before national intelligence gets to know, then there has been intelligence failure. The idea that this is becoming militarised and that we could end up  where other countries have reaches should be a cause for concern,” he said,

With pictures circulating on social media showing men and women attired in trousers, black t-shirts and boots,  Col Aboagye said Ghana should be worried because similar agitations for greater autonomy in English-speaking Cameroun had developed into a national security threat.

He said until recently, the Western Togoland was about a political movement and making t-shirts, flags, and currency but now “has military-type training and that 2000 people have graduated within the contested regions should make us worried.”

Col Aboagye noted the idea that the group is well organised, probably with arms, command and control should give the security authorities the cause to be extra vigilant. 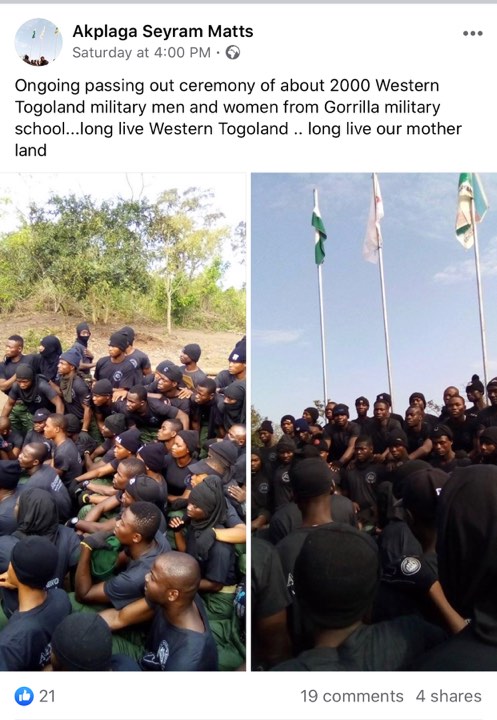 The HSGF has been involved in a running battle with the security services for years now.

About 81 members of the separatist group were in May 2019 arrested for assembling for a protest over the arrest of seven leaders of the Homeland Study Group Foundation.

They were subsequently granted bail.

Also, the Attorney General in July 2019 withdrew all charges brought against the members of Homeland Study Group Foundation who were working for the secession of the Volta Region from Ghana.

The group members were arrested by a combined team of police and military personnel at Ho on Sunday, May 5 when they were holding a meeting to allegedly to arrange to declare a Western Togoland as an independent state on May 9, 20I9.

According to the police, the group had created a constitution and an anthem for the supposed independence declaration.

The police also claimed that the group leaders were training some youth in “militia-style” to form the core of police and military activities in the supposed new country, the Western Togoland after the declaration of independence.

In November, another was arrested after the group declared an independent Western Togoland. Their leader, 85-year old, Charles Komi Kudzordzi, has since disappeared. 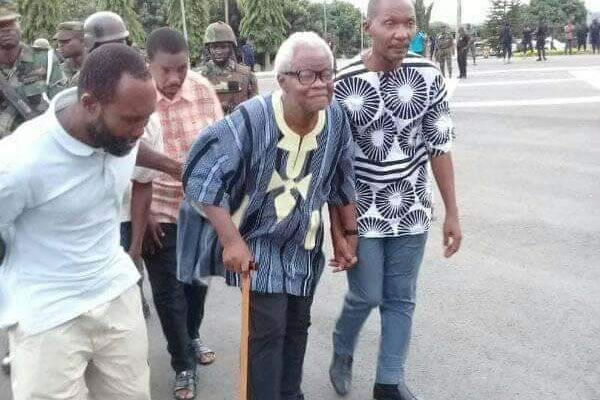 Togoland, former German protectorate, western Africa, was divided between the Republics of Togo and Ghana.

Togoland covered 34,934 square miles (90,479 square km) between the British Gold Coast colony to the west and French Dahomey to the east. It covers part of the parts of the Volta Region, Northern, North East and Upper East regions.

It became a political unit in 1884, when, in the European scramble for overseas territories, German chancellor Otto von Bismarck claimed it for Germany and other European powers formally recognised the claim.

The Germans intended to make Togoland a model colony. Because the region lacked mineral resources (its phosphate reserves were not then known), Germany concentrated on agricultural development.

Lomé, on the Gulf of Guinea, was developed as the principal town and port, and roads and railways were constructed to link the port to parts of the interior.

The Germans also established a judicial and administrative system. The infrastructure, designed to serve German needs, brought some unity to the protectorate.

During World War I France and Britain occupied the protectorate, and in 1922 it was formally divided between them under a League of Nations mandate.

Two-thirds of the land and people, including Lomé, became French Togoland, bordering Dahomey.

The remainder in the west, bordering the Gold Coast, became British Togoland.

In 1946 the two Togolands became United Nations trust territories. The British part was administered with the Gold Coast and became part of independent Ghana in 1957, but French Togoland remained administratively distinct from Dahomey (now Benin) and became independent as the Republic of Togo in 1960.

Lingering sentiment for the reunification of Togoland, especially among Ewe people in Ghana, has occasionally strained relations between Togo and Ghana since independence.

”Prosecute Illegal Miners, They Are Terrorists”-Sam George to Government