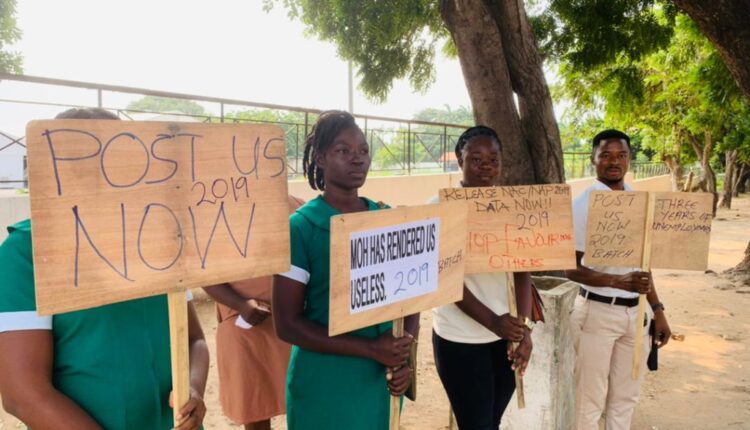 What have we done to deserve this? – Picketing nurses cry ahead of budget presentation

Some aggrieved trained nurses are picketing in front of Parliament House ahead of the 2022 Mid-year budget review presentation by Finance Minister Ken Ofori-Atta.

The nurse assistants held placards with inscriptions such as “MOH has rendered as useless” “Three years of unemployment” and “Post us now”, among others.

According to them, they have now become a burden to their families and loved ones because the government has not provided them with employment.

“I have been in the house for three years now and we have become a burden to our families. We are pleading with them to help us. Our rent is due, but where is the money to settle the debts. We don’t understand why we have accessed the portal together with the diploma and degree students, but we are still in the house.

“The degree and diploma holders are at post, but we are still in the house. Right now, we are burdens to our families. Some of them are thinking that we failed our exams, which is not so. What have we done to deserve this? We can’t tolerate this again,” an aggrieved nurse, Yvette Maame Adwoa Attiako, stressed.

Another aggrieved nurse, who also completed school sometime in 2019, believes that picketing at the premises of Parliament will be their last resort to get the government to hear their plea after nearly three years of prolonged silence by their employers.

“We did demonstration upon demonstration, but nothing has been done, and we want people to know that we are still at home. You know the politicians will always go to the media and claim we have been posted, but that is absolutely not true.

“Also, we have to renew our nurses’ PIN all the time, and it comes at a cost of GHC55. Where do they want us to get the money from? As it stands now, I have resorted to quick loans. Every time I get a message from Quick Loan,” he lamented.

The sector minister was scheduled to deliver the address on Wednesday, 13 July, but the date was changed due to negotiations between the government and the International Monetary Fund (IMF).

The postponement was to allow the government to possibly make some recommendations to the budget.

Among other things, he is expected to provide information on how revenue and expenditure had performed in the first half of the year and the country’s current budget deficit figures.

The highly expectant address will hopefully see a revision of some of the macro targets in view of challenges that the country is facing as a result of the global phenomenon — COVID-19 and the Russia-Ukraine conflict, which has driven the prices of crude oil up, with its adverse implications on petroleum products.

With the government officially reaching out to the IMF for support, the minister is also expected to make his first official comments on this decision after publicly stating that the country would not go to the IMF.

Ahead of that, some stakeholders have been sharing their expectations, including calling for the reduction in the current charge rate of the Electronic Transfer Levy (E-levy) and a review of the tax exemption regime to curtail revenue losses.

The government’s revenue target for 2022 from the levy is GH¢4.5 billion.

Meanwhile, others are also calling for a reduction in fuel prices as commuting to various destinations has become a big hurdle.