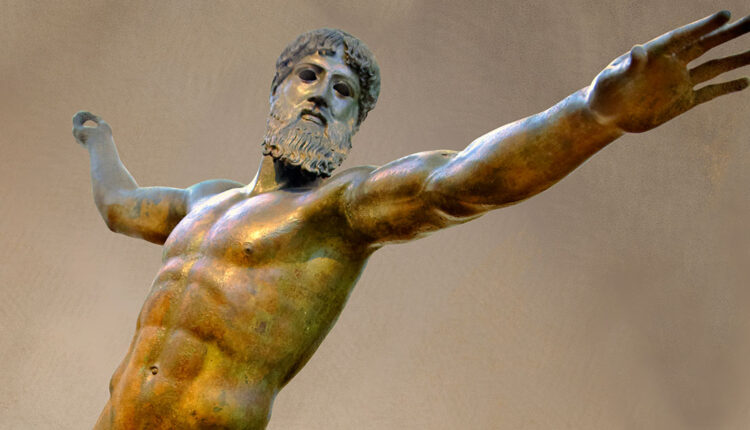 What if Olympic athletes went back to competing naked?

Ancient Greek legend has it that in 720 BC, an Olympic athlete named Orsippus of Megara was competing in the 185m run when his loincloth slipped off.

Rather than stop to hide his shame, Orsippus sprinted on and won the race. His triumphant example stuck. Nude athletic competition – often emphasised through the liberal anointment of olive oil – became all the rage in Greece, seen as the ultimate tribute to Zeus.

“There was this whole idea of Orsippus being heroic and victorious, and then celebrating that he was naked,” says Sarah Bond, an associate professor of history at the University of Iowa. “The Greeks going naked became a way of recognising their Greekness and civility.”

By the time the modern Olympics were revived in 1896, however, the cultural tides had long since turned. The organisers didn’t even consider bringing back the Greek tradition of naked competition. And in modern athletic competition, clothing now also plays an essential role in performance – shoes offer grip and add a spring to a runner’s step, swimming costumes can help swimmers slip through the water more easily and tight-fitting outfits can reduce wind drag.

This summer’s Olympics in Tokyo, however, promise to be unusual in many ways, given the constraints of Covid-19. But what if the Games took an even more unusual step by reinstating the nudity of the original Greek Olympic tradition? While no one is seriously considering doing this, the idea does raise interesting questions about athletic performance, cultural norms, sexism and more.

For starters, competing in the nude would create awkward logistical issues for many athletes. While modern competitors often perform their sports virtually naked – wearing only skin-tight spandex, for example – certain pieces of clothing do serve important primary purposes: to hold women’s breasts and men’s genitals in place. “Without being crude, that does help in terms of comfort, at least,” says Shawn Deaton, the special projects director of the Textile Protection and Comfort Center at North Carolina State University.

On the other hand, the degree to which clothing actually contributes to athletic performance (as opposed to just comfort) is less clear. According to Olga Troynikov, a professor of functional materials and human-centered engineering at RMIT University in Melbourne, it really just depends on the garment, its fit to an individual athlete’s body and the sport. In general, though, apparel does a couple things for athletes, Troynikov says. First, it streamlines the body and “braces you together,” allowing the power of muscles to be better directed to the task at hand. Weight lifting belts and spandex can be helpful, for example, to stabilise a competitor’s muscles so they can direct all their energy toward the work they are doing. Without these garments, performance may suffer.

Very smooth clothing can also reduce resistance that the body encounters when moving through air or water—a boon for many types of sports. For example, in addition to shaving their legs, cyclists can also benefit from wearing tightly fitted clothing with very low resistance to air, and with strategically placed rough patches to create a beneficially configured wake behind them.

The most convincing example of athletic advantages afforded by clothing comes from swimming, however. In fact, the sport very nearly “became a competition in engineering rather than just in the athletic abilities of the human body”, Troynikov says. This issue made headlines in 2008 when swimmers competing at the Beijing Olympics broke 25 world records – 23 of them by athletes wearing a specialised full body polyurethane suit called the LZR Racer.

According to NASA, whose scientists helped design the LZR Racer, the cutting-edge suit reduced skin friction by 24% and also compressed the wearer’s body to lessen drag. In 2010, FINA, the international governing body of swimming, determined that the LZR Racer and similar suits conferred too unfair an advantage for the wearers. FINA now bans athletes from competing in any suit that aids speed, buoyancy or performance. In effect, this means that – aside from drag added by dangling breasts or genitals – going nude would probably not impact swimmers’ performance that dramatically.

Proper footwear that provides arch and heel support and cushioning for the ball of the foot significantly aids in running, jumping and making quick turns
In terms of other summer sports, clothing’s overall contribution to better times or scores is more questionable, Troynikov says. “There’s a lot of claims that it does this and does that, but really, there’s not much there.”

Compression garments, for example, are designed to change the way blood flows through the body in order to improve oxygenation. In fact, the research is divided about 50-50 for and against improvement in performance when athletes wear these garments. “There’s some research, but it’s inconclusive,” Troynikov says.

Shoes, on the other hand, are a different story, not just for increasing performance but also for ensuring safety. Proper footwear that provides arch and heel support and cushioning for the ball of the foot significantly aids in running, jumping and making quick turns. Shoes also reduce impact on the lower limbs, bones, ligaments and muscles. “The feet bear all the weight of the body,” says Pamela McCauley, an industrial engineer at the Wilson College of Textiles at North Carolina State University. “That’s why it’s so essential to have excellent foot support, to support your body.”

For safety, some sports require even more specialised footwear. Athletes competing in Olympic sailing, for example, rely on their shoes to reduce slipping and aid their stability when hanging off the side of the boat. This reduces the potential for dangerous accidents while also boosting performance. All told, McCauley says, “If they want to go back to doing the Olympics nude, that’s fine, but at least keep the footwear.”

Going in the nude may also influence who winds up competing. Shoes or no shoes, some athletes – if faced with mandatory nakedness – may choose to bow out of the Olympics in protest. More conservative nations may also ban their competitors from participating altogether. “For cultures in which modesty plays a great role, this just wouldn’t be contemplatable,” says Ruth Barcan, an honorary associate professor of gender studies at the University of Sydney, and author of Nudity: A Cultural Anatomy.

The LZR Racer swimsuit reduces drag on the wearers body as they move through the water (Credit: STR/AFP/Getty Images)

There would also be serious legal and ethical questions if athletes under the age of 18 were also required to compete in the nude. While male nude athletes as young as 12 participated in the ancient Greek Olympics, given the religious nature of the games, Bond says, sexual activity or sexualisation of athletes was strictly prohibited and would have been seriously frowned upon.

That wouldn’t be the case today. “Nakedness in the Olympic games had a different meaning back then,” Bond says. “Today, it would become very inherently sexualised and very pornographic, and that would become very predatory, in turn.”

In ancient Greece, the Olympics were also viewed by a primarily elite male audience, all of whom came from the same cultural and religious background (a few unmarried women were also allowed to attend). Today, on the other hand, the games are broadcasted to millions of people around the world. While conservative countries would likely ban stations from airing the Olympics, in more liberal places, “media companies would go wild with excitement”, Barcan says.

The reactions among viewers, on the other hand, would be very mixed. “For every person who thinks something is artistic and noble and glorious, you’ll have others who think it’s disgusting,” Barcan says. Social media would ensure that the full spectrum of views would spread far and wide, almost certainly affecting the performance of the athletes whose bodies were being scrutinised – for better or worse. The more uninhibited athletes might love the attention. “They’d have these perfect bodies and show them off,” Barcan says. But even the most self-confident competitors might find the attention difficult. “They’re not in control of what the media and pop culture make of it,” adds Barcan.

Female and transgender athletes, Barcan continues, would “undoubtedly” face more judgement than cis male athletes. There is plenty of historic precedent for this. When Brandi Chastain took off her jersey after scoring the decisive goal in the 1999 Women’s World Cup, for example, photos of the soccer player in her sports bra created an international media frenzy – despite the fact that male athletes, of course, are seen shirtless all the time. “Even that was sexualised by the American public,” Bond says. “I can only imagine what would happen if athletes went completely naked.”

Indeed, for many athletes, the psychological effects of an all-nude Olympics may far outweigh any physical effects of not wearing clothing. “Imagine the task of trying to screen out a million voices commenting on the most intimate parts of your body,” Barcan says.

If nudity was made a permanent staple of the Olympics, then over time, it could be that society would revert back to the Greek tradition of viewing athletic nudity through a lens of heroism and celebration. But that certainly would not happen overnight, Barcan says.

In the meantime, for many athletes, the emotional energy required to tune out the cultural baggage and societal judgement surrounding nudity would probably take a toll on performance. Under these constraints, the winners of the first nude summer Olympics could wind up being not those with the greatest athletic prowess, but those with the strongest ability to channel the ancient Greek mindset.