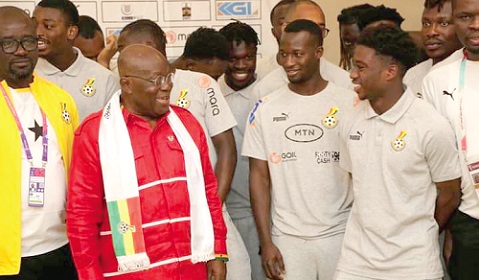 Last Thursday, in a burst of patriotism, I found myself watching Ghana’s opening match against Portugal with some colleagues in the office. Ordinarily, I would rather curl in bed and snore away than watch a football match, but when Ghana is playing, it is another matter altogether.

I had not been able to find a Ghana jersey that fit, so I grabbed a miniature flag and made myself happy with excitement as the clock ticked towards kick-off time.

In the conference room at the ministry, colleagues joined the minister and the acting chief director to watch the game.

Everything else was on hold.

Of course, Facebook buzzed throughout the match. I have no idea about the offside rule, or whether the penalty awarded against Ghana was justified, and therefore did not have an opinion either way but I noted the outrage.

In the building – as I am sure was the case everywhere else in the country and beyond- goals by Portugal were met by a collective silence and goals by Ghana, naturally, were met with screams that reverberated throughout the building. In between, there were ‘Oohs’ and ‘Aahs’ at near misses.

In solidarity with the Qatari authorities’ clampdown on alcohol during matches, which seemed to rile the English press and the English football fans in particular, I ignored the temptation of a cold beer throughout the match.

Eventually, it was not to be. Ghana lost 2-3 to Portugal.

I do have faith the Accra Hearts of Oak admonition that ‘never say die until all the bones are rotten’. I have seen balls blasted into the net at the last minute, after which the final whistle brought it all to an end.

But as Ghana limped to defeat in the last few minutes, I braced myself for the reality of the situation and also for the onslaught of negativity. I was not disappointed with the latter. The sharp knives were unsheathed and the guns came out blazing in fury as soon as the final whistle blew.

There were those who said it showed Ghana never plans, never prepares well, do things randomly, ad hoc, and that basically we are not a serious country!

Argentina and Germany had lost their earlier matches, but that was irrelevant. Incredibly, some even blamed the President’s presence in Qatar for the match as being responsible for our loss.

As my friend Kwame Panyin Bansah noted on Facebook, Messi was missing in that first game against Saudi Arabia, yet there were Ghanaians defending him, saying it wasn’t his day, and that it happens.

I wonder whether any Ghanaian star player would get that much latitude, and Kwame noted the plain insults and negativity heaped on Partey.

I still recall the vitriol poured on Asamoah Gyan’s head when he missed that penalty at the 2020 World Cup. As many have observed, if only Ghanaians held their politicians to the almost impossibly high standards they set for their football players…

Ghana was the last African country to play its first match. None of the four African countries that played previously had scored a goal. People speculated that Ghana would be the country to buck that trend. And indeed, we did, we scored. Yet some of the naysayers claimed Ghana’s only objective was to be the first African country to score a goal at the tournament.

As I stated on this page sometime ago, I do not believe Ghana will win the World Cup and I think most, if not all, Ghanaians would not mention Ghana if asked to state which five countries they believe have a chance of winning the cup. That is the reality.

But what I refuse to believe, even though I am no football fan or coach or pundit, is that our team is useless. First, you do not just get up and qualify for the World Cup.

Secondly, we have played just one match so far and against a team that is no mean achievement in football. I don’t think even Argentinean fans are tearing out their hair over their loss to Saudi Arabia, which occasioned a full holiday for Saudis.

I think that for some people, negativity and cynicism in almost every situation constitute the ingredients they feed themselves on to demonstrate not only their smartness but also their claim that they do speak truth to power and are independent thinkers.

Of course, for others, there is a political twist to it all — a belief that a loss is an opportunity to lambast the government of the day, whose Sports Minister is the head of the football delegation and is responsible for several key decisions in planning and executing our campaign.

Deeply embedded in this cynicism is a belief that corruption prevails in every single thing being done in football in this country.

Rallying around the flag

Of course this is not to suggest that we must all roll over on our bellies and shower our national team with praises and flowers and all things nice.

There is a thing such as tough love, and one can and must criticise where the need arises. It is the constant ranting and bile that I find disconcerting.

There is no doubt that there are significant challenges in football administration in this country or that corruption in the sector is real.

Nobody can or should paper over that. Further, I understand some player selections do raise genuine eyebrows. I appreciate that.

From what a few friends tell me, and also from my inexperienced observation, Ghana made a decent showing at the Mundial last Thursday. This conclusion does not equate to glorifying mediocrity.

We could do better, but there is no need to hang the team over this. I think that once the team has been selected it is our responsibility as citizens to support the team, rally round the flag and send some positive energy out there, challenges notwithstanding.

Positivity brings results, even though hope on its own does not cook yam. But then, constantly preaching doom and gloom as some do in every facet of our national life and pretending we are a bunch of hopeless people hardly cooks yam either.

Let us all – including those of us who are football ignoramuses – enjoy the tournament in Qatar, its delights and its surprises.

There will be lots of time for a savage Black Star postmortem when the right time comes – whenever it comes.