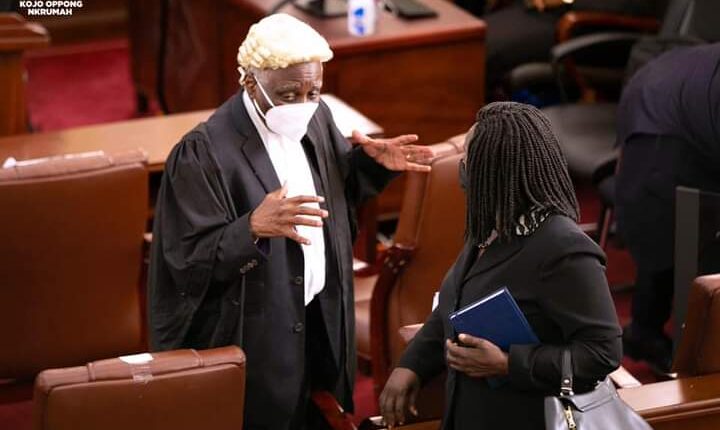 “When you win, the judges are right but when you lose…” – SC justices as they dismiss review application

The Supreme Court for the third time unanimously dismissed a review application filed by the petitioner in the on-going election petition.

This particular review was for the petitioner John Dramani Mahama to re-open his case and subpoena the EC boss Jean Mensa in the ongoing election petition.

The nine-member panel presided over by the Chief Justice Anin Yeboah in a detailed ruling said there was no legal basis and merit for the review application to be granted.

Taking a cue from past precedents and old cases, the Chief Justice said no error of law had been pointed out in reference to the Black’s Law dictionary and subsidiary legislation.

He reminded counsel for the petitioner Tsatsu Tsikata that an application for review are not grounds to re-argue their case.

According to the CJ, a review is not a platform for an emotional reaction to an unfavourable judgement.

“Further, we stick to the time-honoured principles that the Supreme Court has adopted in circumstances in which it reviews its decisions. Thus, in the case of Mechanical Lloyd Assembly Plant versus Nartey (1987-88).

“Let me say at once that, for all I know, virtually every judgement on this earth arrived at as a result of evidence gathered from several sources can be criticised.

“A privy council judgement put in the hands of any lawyer, along with the evidence grounding it, can be criticised in the same way as a high court judgement can be.

“A person who lost a case, will almost instinctively feel that the judgement must be wrong. And why not? If he had won, the decision would be right; so, if he lost, how could the court be right?

“But the mere fact that a judgement can be criticised is no ground for asking that it should be reviewed,” the CJ quoted one of the precedents.

In its ruling, the court also said the panel was restrained by its mandate to administer justice in accordance with the law and accepted practice.

“The court’s ruling are binding on all other courts so we must ensure that we are opening Pandora’s box that can become a stepping stone for abuse of court processes at other levels of judicial system.

“The interest of justice is not only the interest of one party in the dispute but must necessarily be an outcome arrived at through the proper balance of what the law has prescribed,” the CJ stated.

The court also held that the depositions filed was done by the Electoral Commission, who is a party in the case and not the EC Chairperson Jean Mensa in her capacity, so the petitioner cannot compel the EC boss to testify.

Justice Yeboah said although the petitioner continues to insist on calling the EC boss as an adverse witness, the petitioner’s team still fails to tell the court what new evidence they want to bring to advance their case.

The court’s decision comes after all parties argued their case regarding the reopening application.

Counsel for the petitioner, Tsatsu Tsikata said the seven-member panel who dismissed their re-opening application erred fundamentally and committed a great miscarriage of justice.

It was the case of Mr Tsikata that the earlier panel in their ruling failed to make reference to the statues of the 1992 constitution of Ghana.

He said the panel rather resorted to foreign laws, including that of Netherlands and Black’s Law dictionary.

“We are respectfully saying that the ruling that your Lordships gave did not even avert to Order 38 rule 10 which we had indicated was the basis on which we were seeking to reopen our case and it was therefore per incuriam.

“Also, the ruling was per incuriam and has occasioned a grave injustice. We, again, show how this Supreme Court averted its mind to the Supreme Court of the Netherlands in which the court also highlighted the circumstances of maintaining the truth as it was of value to call the witness,” Mr Tsikata said.

Counsel for the Electoral Commission, Justin Amenuvor said the application was misconceived, had no bearing to the case and should therefore be dismissed.

He said the petitioner has been given every opportunity and a fair trial since the petition started.

To go past these opportunities, Mr Amenuvor said was an abuse of court processes.

“We concede that the court is not infallible and that your Lordships may change your mind in an application for review only when certain conditionalities have been met.

Counsel for the second respondent Akoto Ampaw associated himself with the submission of the first respondent’s counsel (Justin Amenuvor).

Mr Ampaw said the application does not demonstrate any fundamental error committed by the court which has occasioned the petitioner in the miscarriage of justice.

He argued that all the submissions regarding section 72 of the evidence Act as quoted by Mr Tsikata is completely unmeritorious and irrelevant.

Earlier Ruling of the court

On February 16, 2021, the Supreme Court, in an unanimous decision tossed out the request to allow the petitioner John Dramani Mahama in the ongoing election petition re-open his case.

Among other things, the seven member panel presided over by the Chief Justice Anin Yeboah said the petitioner’s legal team have not demonstrated any new evidence, in its argument for re-opening.

The review panel in effect maintained their earlier ruling.