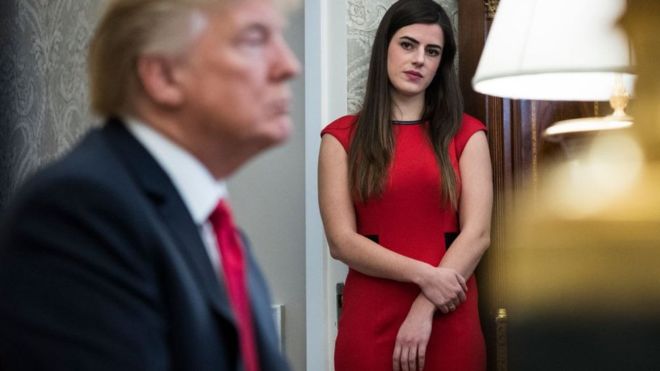 The personal assistant to US President Donald Trump has been forced to resign from the White House after leaking intimate information about his family.

Madeleine Westerhout, 29, was abruptly removed on Thursday after Mr Trump learned she had shared the details at a dinner with reporters early this month.

She was drinking and bragging about her access to Mr Trump during his vacation in New Jersey, CBS News reports.

Ms Westerhout had worked with Mr Trump since the first day of his presidency.

The White House has declined to comment on her departure.

The New York Times, which first reported her firing, cited a White House source who said she is now considered a “separated employee” and would be barred from returning to the White House on Friday.

Described in US media as Mr Trump’s gatekeeper, she had an office directly in front of Mr Trump’s Oval Office in the West Wing.

What did she do?

The comments were made in an off-the-record dinner conversation with reporters during Mr Trump’s vacation to his club in Bedminster, New Jersey, earlier in August.

Sources told CBS News she was drinking and disclosed private details about the president’s family. She also reportedly gossiped about broadcasters seeking access to the president.

It is unclear how Mr Trump learned of the conversation.

Several White House officials had long suspected her of disloyalty to Mr Trump, with one former official telling CBS: “She was a spy from day one who sought to use her proximity to the president to curry favor with his detractors.”

Ms Westerhout had previously worked for the Republican National Committee, and during Mr Trump’s transition, she was often seen escorting guests through the lobby of Trump Tower in New York.