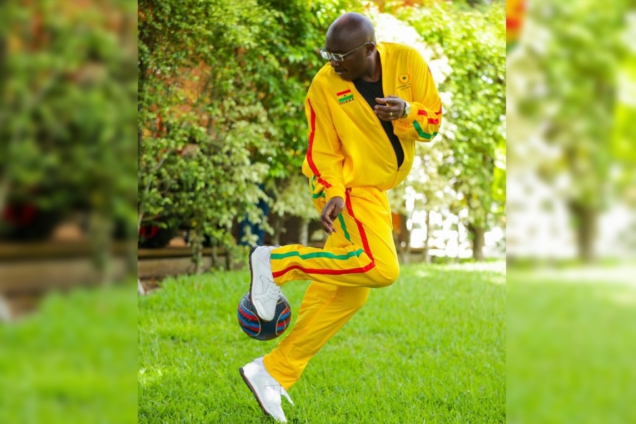 Why Bawumia’s Rainbow Flick Is Called ‘Milo’ In Ghana

The game of soccer is replete with many dribbling skills that footballers use to disarm their opponents.

From nutmegs to stepovers, players employ a variety of moves to escape the pestilence of defenders.

One such skill, which is widely celebrated on the field of play is the rainbow flick; also known as the rainbow kick or the reverse flick-over.

It involves flicking the ball over the head of one’s opponent; causing the opponent to lose sight of the ball, in a way that is often embarrassing.

To do it, one has to step to the side of the ball and flick it across to the back of the opponent. The ‘arch movement’ is what gives the trick its ‘rainbow’ name.

“It is usually performed while running forward with the ball, and is done by rolling the ball up the back of one leg with the other foot, before flicking the standing foot upwards to propel the ball forward and over the head”, Wikipedia explains.

According to history, it was first executed in 1968 by Alexandre de Carvalho, also known as “Kaneko”.

The skill then came into more prominence during the 2002 FIFA World Cup, when Turkey‘s İlhan Mansız, flicked the ball over his head, and that of Brazilian left-back, Roberto Carlos.

Carlos was reportedly mesmerized by the skill, forcing him to commit a foul in the process.

Indeed, it is seen as a move that usually embarrasses defenders, and ridicules them.

If you charter a flight to Brazil, you’ll hear them describing it as the ‘Lambreta’. In Italy, it is also called the ‘Lambretta’, with an additional ‘t’.

If you travel to Germany, you’ll hear them call it the ‘Okocha-Trick’, and in a company of French nationals, ‘coup du sombrero’ is what you’ll hear; all referring to the same trick.

Wikipedia further states that elsewhere in the United Kingdom, it is popularly known as the ‘Ardiles flick’, while the Spaniards prefer to call it the ‘arco iris’.

However, in Ghana, the skill has a completely different designation altogether.

Rather surprisingly, Ghanaians associate the skill with food; the beverage called ‘milo’. But why this attribution?

Somewhere around the late ’90s getting into the year 2000, ‘Milo’, the globally acclaimed beverage brand, produced a TV commercial where the skill was stylishly displayed.

In the said commercial, some young lads were seen actively displaying the skill, after taking sips of the Milo beverage.

Purportedly, the young lads received the energy and inclination to replicate the rainbow flick, only after drinking the cups of Milo.

This portrayal in the said TV commercial, subsequently influenced Ghanaians to name the skill ‘milo’.

Since then, other generations of football lovers in Ghana have stuck to the term, as their unique description for the rainbow flick.

Nigerian legend, Jay Jay Okocha, is noted for this skill, and in modern times, Brazil’s Neymar does it often.

When it is done on Ghanaian pitches, it is met with loud applause due to the relative difficulty involved in mastering the skill and successfully executing it.

But once you do, you become a ‘star’!

Meanwhile, the latest star to have done the move is the Vice President, Dr. Mahamudu Bawumia.

In a goodwill message to the Black Stars ahead of their first match in this year’s World Cup, he attempted the skill, very much to the delight of the public.

In a video that has since gone viral, the Vice President, while enjoying his day on the ball, encouraged the Black Stars to give off their best, as they prepare for their first World Cup encounter against Portugal tomorrow.

According to him, the team is endowed with enough quality to give a good account of themselves on the world stage.

“The moment has come for the Black Stars to take on the World”, he said in the viral video.

The Vice President continued, “We have a group of talented players who have been selected and they cannot be intimidated by anyone.

I want to urge the Black Stars to go on and play their hearts out for Mother Ghana. We can stand the world. We have done it before and we can do it again”.

“They should go out and emulate the historic deeds of their predecessors. God bless you all. You can do it. “Go! Ghana! Go! Go! Black Stars! Go”, he ended.

In a related development, former President, John Mahama, has also urged the senior national team to give off their best in this year’s tournament in Qatar.

Earlier, the former head of state took his Facebook wall to inject a dose of encouragement into the Black Stars.

According to him, the team’s ‘unique brand of football’ has always amazed the world, hence his belief in the chances of the team in Qatar.

Touting the achievements of the Stars in recent times, he called on Ghanaians to rally behind the team, as they face the world a week away from today.

“The players and the technical team have done their part by answering the national call once again and have exhibited the willingness to fight for the nation.

It must be our patriotic duty as citizens to give them our full support, and as Ghanaians, we must see this as a call to national duty”, portions of the post read.

The support for Ghana’s participation at this year’s World Cup gained momentum after the team defeated Switzerland in their final friendly match ahead of the start of the competition.

In what many have described as an impressive performance, the team scored two goals against their Swiss opponents at the ZSC Stadium in Qatar.

The Stars registered their first goal after Southampton defender, Mohammed Salisu, latched onto an aerial ball to find the back of the net in the 70th minute.

Four minutes after the opener, 22-year-old Antoine Semenyo, doubled the lead with a powerful strike, capitalizing on a defensive mess in the Swiss backyard.

After registering the two goals, the team kept their composure until the last blast of the whistle by referee Ahmed Eisa Mohamed.

The win subsequently triggered many fans to take to social media to applaud the team for their impressive performance.

This will be followed by another duel against arch-rivals Uruguay; followed by their last group encounter against South Korea.

The manager of the side, Otto Addo, believes his side has what it takes to surmount their opponents and dazzle on the world stage.

A rent control system that cannot be controlled