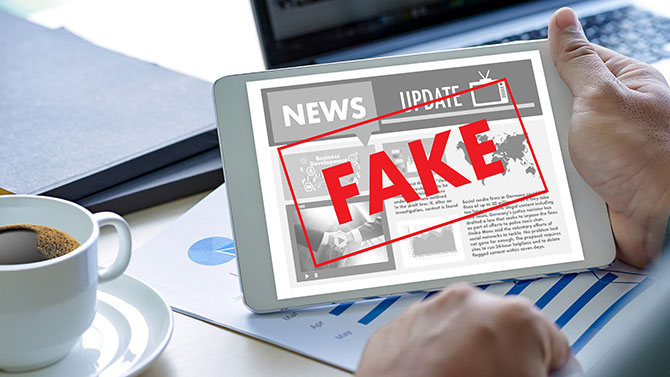 Why Do We Fall for Fake News?

“Fake news” was the buzzword of 2017, and barely a day passed during Donald Trump’s presidency without him criticizing media bias or the spread of so-called “alternative facts.”

However, discussions of media misinformation have not abated since President Trump left office.

Many articles suggest that social media sites should do more to educate the public about misinformation or that readers should think more critically about the sources of news stories before sharing them. But there are fundamental problems with this.

First, there isn’t a clear definition of what “fake news” really is. And second, it overlooks important aspects of people’s psychological makeup.

What Is “Fake News”?

“Fake news” can be classified in several ways and represented as a series of concentric circles. First, in the centre of the concentric model, we have actual fake news. These are the stories we commonly see shared on sites such as News Thump and The Onion.

These satirical stories are written for comedic purposes and are put together to entertain–not to educate. These stories are written with no editorial policy concerning the truth. The story is purely distributed to be clicked on, shared, and ultimately to make money through advertising revenue.

Next, we have propaganda articles. Typically, these pieces do not contain any real news value. They may, for example, detail an individual’s past behaviour and suggest that it reflects something about their current intentions.

Alternatively, these pieces may contain some kernel of truth, but this may be twisted in such a way that it totally misleads audiences and misrepresents a story’s true news value.

Finally, and occupying the outermost ring of the concentric fake news model, some stories are technically true but reflect the subtle editorial biases of the organisation publishing them. This reporting is commonplace in mainstream media through selective storytelling and politically-driven editorials.

Whether this is reflected in the left-wing bias of The Guardian or the right-wing approach of the Murdoch media empire, this practice is less malicious and more a political interpretation of current events.

Clearly, not all of these traditionally meet strict criteria for being classified as “fake.” However, when presented as fact in mainstream outlets, ideologically-driven interpretations of the news can often be labeled as “fake news” by those who do not share that particular worldview due to the ideological leaning (and potential bias) of the outlet itself.

Are We Biased, or Just Lazy?

Over the past 10 years, there has been an emergent body of work on who falls prey to fake news and why this happens from a psychological perspective.

In a series of papers reviewed recently in the journal Trends in Cognitive Sciences, they concluded that poor “truth discernment” (i.e., the ability to tell fake news from real stories) is driven primarily by a lack of careful reasoning.

They typically used measures such as the cognitive reflection task (CRT) to measure critical reasoning.

This is a task that asks participants to respond to various problems, such as:

The intuitive (and therefore careless) answer here is $1, but the correct answer is $1.05. Those who give the wrong answer are said to have poorer levels of cognitive reflection and can be inferred to rely on intuitive modes of thinking.

Using a task such as this is arguably more reliable than looking at self-reported propensities for critical thinking. The latter may be liable to self-presentation biases such as social desirability.

This body of work has led to a move away from believing that ideological beliefs drive fake news judgments. However, in a series of studies I am currently writing up, our team finds consistent evidence that beliefs in political news stories are consistent with an ideological explanation.

Across three studies in the current pre-print version of our project, we find that liberals and conservatives in the U.S., and those who voted for or against Brexit in the UK, all interpret both real and fake news stories as legitimate (or not) in a manner that is consistent with their ideology.

If a story supports the cause, it is more likely to be seen as legitimate. If it supports the opposition, its legitimacy is doubted–irrespective of the story’s truth or fakeness. A fourth study that is currently being written up replicates this finding once more.

Going further, we find that collective narcissism (the belief in the ideological ingroup’s moral and political supremacy) enhances this result. In opposition to Pennycook and Rand’s conclusions, we also found evidence of an interaction between a need for cognition and participants’ ideologies when judging news stories.

In this, when somebody who strives to gather information before making a decision was shown fake news that supported their ingroup’s cause, they were more likely to judge this as legitimate than an ingroup member scoring lower on this cognitive style.

However, we used a self-report measure of need for cognition rather than a test of actual cognitive style, leaving this result open to challenge.

The combination of these findings highlights the multifaceted nature of fake news beliefs and leads us to question how we can reduce the sharing of false news stories.

Luckily, Pennycook and Rand’s work also explored how people can be discouraged from sharing fake news. The simplest strategy that appears to be effective is to prompt people to question whether something is accurate before hitting the ‘share’ button.

Asking people to consider the accuracy of a story has been shown to reduce the sharing of fake news by around twenty percentage points (from 57 percent being likely to share without a prompt to 39 percent after considering the truthfulness of a story).

Pennycook and Rand have also spoken of the “wisdom of crowds” as a way of fighting fake news after finding high levels of agreement in news legitimacy ratings between layperson liberals, layperson conservatives, and professional fact-checkers.

Using such ratings can both encourage readers to consider news accuracy and inform social media algorithms in relation to helping platforms which stories to promote and which to bury.