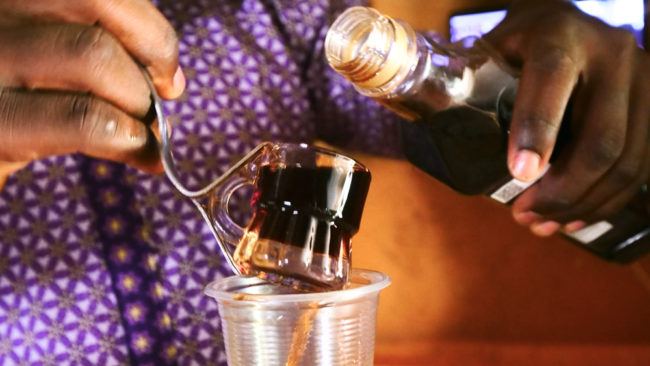 In the late 1980s, in Awudun, a suburb of Tema Newtown, a branch of the religious group, 12 Apostles Church, known in local religious circles as Awoyo, popped up in the neighbourhood. It raised lots of eyebrows in the area.

Not that people were not familiar with the presence of Awoyo churches, it had to do with the decision to close down a popular Akpeteshie spot, which served as a meeting ground for some of the older men and women in the area.

The leader of the church, Agya Gyan, who later assumed a religious name, was a lanky-looking man with well-kept afro hair and a beard that made it difficult to see his mouth. His movements looked uncoordinated but very much aware of his presence. Originally from Winneba, he had been operating ‘Soldier Bar’ in the mid-1970s; I was to learn many years after.

Apart from selling the drink, he owned a distilling ‘plant’, so his bar was always busy with customers involved in the retail of the Akpeteshie. The product is produced by distilling palm wine or sugarcane.

As a teenager, seeing customers enter the bar was something I dreamt of doing, especially because they appeared to be talking on top of their voices and laughing. I was also intrigued by the facial expressions that greeted every drop of the drink into their mouth and wondered why that expression was on their faces.

Even more intriguing was how some tiptoed out of the bar, lost their balance whilst walking, and held on to the walls or anything their hands could hold. It was a fetish to me. With time, some customers also began to experience changes in their looks.

One particular man whose name I remember to be RED was thought to have his bed inside the bar because he was always there; morning, afternoon and evening. He was once carried from the bar into his room, woke up the next day, and was back there. It was something I did not understand at the time.

Aga Gyan was a popular figure in the area, especially among his regular customers. At his bar, I also heard some of the popular highlife tunes from A. B. Crentsil, Smart Nkansah, George Darko and co. It was his bar I heard A. B.’s famous song ‘Ma Me Ndwene Me Ho’ or ‘Let Me Think About Myself.’ And anytime the music saturated the space inside the bar, some customers, with glasses in their hands, will dance and engage in a lengthy monologue.

The bar was directly across from our house, so, it was the first place I would see before heading elsewhere, either to play or loiter around.

Ghana was then under military rule, and budget reading captured almost everything, including the price of cigarettes. Dr. Kwesi Botchwey was the finance minister and anytime he was done with the budget, the bar would be busy with customers drinking and perhaps lamenting about what they had just heard. It did not understand these customers kept drinking and whining simultaneously. I wondered how they could afford Akpeteshie, though things were hard.

Even as a child, I knew things were tough in Ghana. So, how were these customers able to afford Akpeteshie so easily? Despite his popularity in the area, not many people were happy with Agya Gyan, especially one particular woman who once accused him of turning their husbands into alcoholics. The husband would enter the bar sober but be assisted to exit by other people. Husband and wife’s arguments were popular on the compound.

But after months of operating the bar, Agya Gyan one day announced to his customers he had found the ‘Lord’ and his spiritual father had instructed him to stop selling Akpeteshie, else he risked not making it to heaven. It was like a shock in the area.

I remember how his newfound faith became fodder for a local ‘jama’ group, who composed a song to mock him. But he was unfazed. He soon converted the bar into a worship center and every Sunday, worshippers fully dressed in white apparel, would gather and worship. He however started having troubles when he organized a crusade at a football field in the area and, in a sermon, vehemently spoke against the consumption of alcohol.

He used himself as an example and how an encounter with a “spiritual father” had saved him from trading in Akpeteshie. It was from that very sermon that I first heard about some of the various names of the drink: Kill Me Quick, One Touch, Ogoglo, Apio, VC10, Efie Nipa, Kele, Kumepreko, Anferewoase, Apiatiti, Home Boy, Nana Drobo, Sodabi, Holy Water, Liquid Fire, Man Pass Man, African Ice and more. Midway through the sermon a flurry of voices laced with invectives were directed at him by persons I later learnt felted humiliated by aspects of the sermon.

He was, however, whisked away before they could get close to the podium. Despite his new spiritual paths and attempts for those in the area to accept him, he struggled to shake off the Akpeteshie seller’s tag and eventually left the area. The spot was later converted into a sitting area, with some former customers as regular members.

Between a Rock and a Hard Place? : Reflections on the sobering state of Ghanaian…