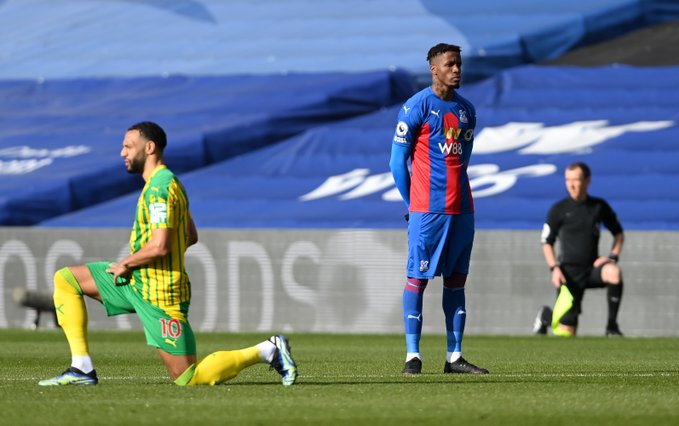 Crystal Palace forward Wilfried Zaha became the first Premier League player not to take a knee in solidarity with the anti-racist movement before Saturday’s match against West Bromwich Albion.

Cote d’Ivoire international Zaha stood tall while the rest of his Palace team-mates and their opponents kneeled just before kick-off at Selhurst Park.

The 28-year-old revealed last month when speaking at the Financial Times’ Business of Football summit he would no longer perform a gesture which has been followed by Premier League players, officials and staff since June.

“My decision to stand at kick-off has been public knowledge for a couple of weeks now,” Zaha said in a statement released on Saturday.

“There is no right or wrong decision, but for me personally I feel kneeling has just become a part of the pre-match routine and at the moment it doesn’t matter whether we kneel or stand, some of us still continue to receive abuse.

“I know there is a lot of work being done behind the scenes at the Premier League and other authorities to make change, and I fully respect that, and everyone involved. I also fully respect my team-mates and players at other clubs who continue to take the knee.

“As a society, I feel we should be encouraging better education in schools, and social media companies should be taking stronger action against people who abuse others online – not just footballers.

“I now just want to focus on football and enjoy being back playing on the pitch. I will continue to stand tall.”

The gesture was brought in as a way to promote the anti-racism message after the death in police custody of George Floyd in the United States last May sparked a rise in Black Lives Matter protests.