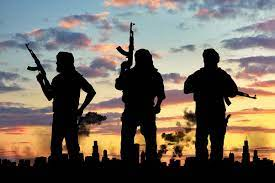 Widening of extremism in the West African Region, a situation that calls for extra vigilance in Ghana

The Minister of Finance in presenting his Mid-year budget review in July touched on the safety of Ghanaians in the face of complex security threats in the West African region.

Ken Ofori Atta said it is a major concern to government and it is using a significant amount of resources to ensure that our borders and the country as a whole is kept safe.

“Considering what is happening in the West African region, it is important that we prioritize national security, and we have. Whilst it will not be prudent to disclose the full cost of ensuring the security of this state, let me emphasize that it is significant”

“As as a result, the Ghana Armed Forces (GAF) is implementing an enhanced surveillance program for the country’s air space and international borders through collaboration with other domestic security agencies. We are also aggressively pursuing the Forward Operating Bases (FOB) program to improve response time and prevent cross border crimes as well as terrorist infiltration,” portion of his statement read.

He further stated that to improve internal security, the Ghana Police Service has recruited and
trained 5,000 additional officers to put more police in our streets and communities.

There have been recent attacks on the Ghana-Togo border that calls for extra vigilance.

On August 8, 2022, the District Chief Executive (DCE) for Bunkpurgu-Nakpanduri, Joseph Louknaan revealed that terrorist attacks in Togo are affecting Ghanaian farmers along the Bunkpurugu borders in the Bunkpurugu-Nakpanduri district of the North East region.

According to him, about 23 communities from Bunkpurugu are sharing borders with Togo and their farming activities are threatened due to the terrorist attacks in Togo.

“The terrorist attacks in Togo are worrying because this year the farmers find it difficult to farm and bring the produce to Ghana because the farmers are scared.”

He indicated that the terrorist attacks in Togo have greatly affected business and other activities in the district.

Not long ago, The West African Network for Peace Building (WANEP)  warned that extremist threats are happening very close to Ghana.

The National Coordinator for WANEP, Mr Albert Yelyang stated that these activities are expanding in the Sahel area, a situation that calls for extra vigilance in the country.

“There is that expansion of extremism in the Saharian area. We have some in Burkina Faso towards the northern sector. Many of the incidents have occurred very close to Ghana”.

According to Human Rights Watch-World Report 2022, during 2021, there was a marked deterioration in Burkina Faso’s human rights and security situation as attacks and atrocities by armed Islamist groups surged, unlawful killings by state security forces and pro-government militias during counter-terrorism operations continued which worsened the humanitarian situation in the country.

The report indicated that, The President of Burkina Faso, Roch Marc Kaboré, elected in November 2020 to a second term, struggled during 2021 to address the overlapping crises.

The violence, including the June massacre of over 135 civilians in Solhan, the single deadliest attack in the country since the outbreak of armed conflict in 2016, led to demonstrations calling for an end to the bloodshed.

“Attacks by armed groups caused over 237,000 people to flee their homes in 2021, bringing the total number of internally displaced people since 2016 to over 1.4 million, that is 6 percent of the population of Burkina Faso.

The government struggled to care for the growing number of displaced people,” the report explained.

So one will ask, why will Ghana be an interest for terrorist attacks?

Reports had shown that, terrorist attacks are mostly targeted at resource-rich countries.

Ghana is endowed with natural resources like gold, diamonds, bauxite, manganese and oil which makes it a target for attacks.

On the part of terrorist attacks on countries with rich natural resources, Mr. Asomani explained that, terrorists have been targeting mostly resource-rich countries, hence by her endowment Ghana could be targeted by miscreants.

Addressing a press conference on the measures that have been put in place to prevent such attacks, he reiterated “We are not insulated from those attacks therefore, we think Ghanaians should be aware”.

“Why are we involving Ghanaians? The nature of the threats is such that it is not conventional warfare, they don’t come in with fighter jets. They come in all forms, it could be your pastor in the church, cleric in the mosque, individuals coming in as Civil Society Organisations(CSOs) purporting to do community work”

“That means that we all have to be vigilant. Also we know that the terrorists want access to the sea, the nature of the various attacks we have all seen in the sub region indicates that wherever they go there is some form of mineral or natural resource there particularly gold”

“So the question therefore is, if they attack cities and towns in Burkina Faso that has gold deposits, clearly, Ghana will be an interest,” he explained.

The National Security have said measures have been instituted in order to forestall these attacks however, churches and mosques must also be on alert.

The measures instituted include installation of Closed-Circuit Televisions (CCTVs) in churches and mosques, as well as engaging the services of accredited private security agencies.

“In view of the growing threats of terrorism from the sub-region and the expansionist drive of terrorist groups towards Coastal West African states, with a renewed modus operandi of targeting public gatherings including places of worship, it is imperative that precautionary measures are taken by all stakeholders,” a statement issued on Friday May 13 read.

Some security analysts believe the terrorists had already arrived in the country.

The President and Chief Executive Officer (CEO) of the Institute for Security, Disaster and Emergency Studies, Dr Ishmael Norman said Ghanaians must act in ways as though the terrorists were already here in the country.

In his view, some may have been married to Ghanaians.

Speaking in an interview on TV3 network and monitored by the GhanaReport on Saturday May 21 in relation to the caution given by the National Security against the potential attack on Ghana, he said “they are not just near Ghana, they are in Ghana.”

He added “Some of them will even marry Ghanaian men or women. We have to assume that they are already here. The National Security warning is a good one, I believe the terrorists are already in Ghana,” Mr Norman said.

A report released by the West Africa Centre for Counter Extremism (WACCE) recently said Ghana has managed so far to stay safe from terrorist attacks on home soil, yet the country has been so close to terrorism.

Already, the report said, more than 13 Ghanaians are believed to have traveled to fight with terrorist groups since 2015.

Up to twenty three (23) others have been dissuaded from leaving to join extremist groups.

“Ghana’s first recorded case was Nazir Alema Norteye , a young university graduate, who shockingly left the country in august 2015 to join ISIS before sending a message back to his parents to announce his new found cause. He was killed in Syria in April 2016″

The report also indicated that, Professor Kofi Awoonor, a renowned Ghanaian poet and academic, was killed in the West Gate Mall attack in Nairobi, Kenya when Al Shabab fighters besieged the mall in 2013.

The West African variant of the threat has been spreading menacingly and quickly, incurring a spill over into Burkina Faso, the Ivory Coast, Benin and Togo. With all its direct neighbors under some form of attack, Ghana has raised her readiness for eventualities to red alert.

“Even though the fatality numbers are down from the peak of over 7,200 in the region in 2014, the threat has increased in complexity and geographical spread. Today,  53 per cent of all the Economic Community of West African States(ECOWAS), are now encircled by the threat. These developments are dangerous for Ghana”

“Ghana’s proximity to these countries (Burkina Faso to the North, Benin and Togo to the East and Ivory Coast to the West) exposes the country to extremist recruitment or attacks or both,” it added.

Our Porous Borders as gateway to the country

The re-entry of Chinese Galamsey Queen, Aisha Huang to the country has made Ghanaians question the security on our borders.

Many seek answers from the Ministry of National Security on how they could not detect that she had returned to the country for weeks.

If she was indeed a terrorist, she might have caused damage over the past two weeks that she has been in the country incognito, if this placed in the context of terrorism.

How then do we fish/make them out if they are already in the country and living in our communities as some security analyst seeks to imply?

The ‘See Something, Say Something Campaign’

The Ministry for National Security launched a citizens’ awareness campaign aimed at protecting the country against terrorist attacks.

The campaign, dubbed: “See something, say something,” encourages the public to be vigilant of the activities of suspicious characters and blow the whistle on them.

The launch forms part of the ministry’s border counter-terrorism strategy aimed at sensitizing the public to terrorism threats and encouraging the citizenry to collaborate with state security agencies to reduce the threat of terrorism in the country.

Where mobile connectivity is a challenge, locals are to report suspicious activities to their local police, traditional leaders, opinion leaders, heads of faith-based organizations and leaders of political parties who could expedite action for the arrest such schemers.

Terrorism threat in the sub-region have evolved to a point where reliance on only conventional tactics and strategies to combat it seems ineffective.

Recent developments indicate, that the attacks perpetuated in the West African region and the Sahel had been highly unconventional.

The involvement of the citizenry to support the state security with information on happenings in their localities, where terrorists are likely to hide and commit their outrageous crimes, is essential in making it easy for the state security agencies to identify and to effect arrests

The toll-free number — 999 –  provided for citizens to swiftly report suspicious activities to state security should be kept and used for the purpose it is intended for.

The campaign is not aimed at creating panic among the citizenry but rather to bolster the confidence of the public to swiftly report suspicious activities in their communities.

Ghana remains a peaceful and stable nation, in spite of its location in a volatile sub-region.

It is evident as the country has been ranked the second most peaceful country in Africa and 40th in the world in the 2022 Global Peace Index (GPI).