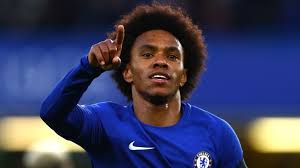 Willian replaces Hazard as Chelsea No.10

Brazilian winger, Willian will wear the No.10 shirt at Chelsea in the 2019-20 season, succeeding Eden Hazard after the Belgian attacker left to join Real Madrid.

He has has given his previous number to Christian Pulisic and taken the shirt his former team-mate left behind this summer.

The Brazilian winger had worn the No.22 jersey ever since he joined the Blues in 2013, but has now swapped it for one that has been associated with Hazard for the last five years until his €100 million (£91m/$111m) move to the Santiago Bernabeu.

Meanwhile, Willian’s previous number has gone to Christian Pulisic, who arrived at Stamford Bridge this summer from Borussia Dortmund, and 21-year-old Tammy Abraham has been given No.9 following his loan spell in the Championship with Aston Villa.