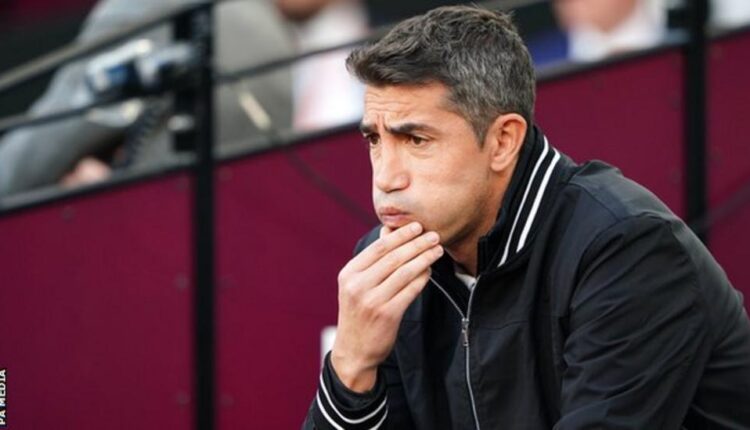 Wolves have sacked manager Bruno Lage after 16 months in charge following Saturday’s defeat by West Ham United left them in the bottom three.

Lage succeeded Nuno Espirito Santo last summer and led Wolves to a 10th-placed finish in his first season in charge.

However, they have won one and lost nine of their past 15 Premier League matches under the Portuguese.

Wolves chairman Jeff Shi said that poor form meant he had “no choice” but take the “difficult decision” to sack Lage.

“Bruno is an excellent coach, a hardworking and dedicated manager, and a warm, wise and honest man,” said Shi.

“He and his staff have been a pleasure to work with throughout their time at Wolves, so it is with much sadness that we have had to make what has been a difficult decision.

“I honestly have no doubts about Bruno’s ability and I’m sure he will succeed elsewhere, however the team’s form and performances over the last few months mean that we have no choice but to act.”

The decision has come after high-level meetings in the wake of Saturday’s 2-0 defeat at the London Stadium, which raised renewed questions over the former Benfica boss.

The Black Country side have only scored three goals and picked up six points from eight games this season.

The club hierarchy felt the current run of form was a poor return given they have spent in excess of £100m on new players this summer.

They brought in Portuguese internationals Goncalo Guedes and Matheus Nunes, with the latter bought for a club record fee of £38m.

Lage, 46, also signed veteran forward Diego Costa, who had been a free agent for nine months and made his first competitive appearance since December 2021 against West Ham.

Wolves fans turned against Lage at the London Stadium, singing ‘you don’t know what you’re doing’ at the Portuguese as their team slipped to defeat.

They are winless in eight Premier League away games – their worst top-flight run since 2011-12.

The manner of the defeat left club officials believing they had little alternative than to part company with Lage, who started with a back three despite allowing popular skipper Conor Coady to leave for Everton in August because he wanted to play with two at the back.

“The only thing I can say is that I’m sorry about the situation,” Lage said in his final post-match news conference as manger.

“We’ve tried to solve these little problems we have and at the moment we aren’t getting points or goals, but we are working hard for them.”

Lage’s replacement will be Wolves’ third Premier League manager since Terry Connor in 2012.

It is thought unlikely Wolves will have a new man in place for Saturday’s trip to Chelsea.

It was in February that talk around Wolverhampton Wanderers was about whether they could secure an unlikely top-four berth.

A comfortable win over Tottenham enhanced Bruno Lage’s status and the transition from Nuno Espirito Santo seemed complete. Since then, Wolves have collapsed – undone by two old failings: an inability to score and the difficulty transitioning away from Nuno’s three-man defence.

On Saturday, the sight of playmaker Ruben Neves being deployed in a back three on the same day former skipper Conor Coady was playing for Everton was perplexing.

Lage cannot be blamed for the injuries that have robbed him of his main strikers, but the defensive problems are self-inflicted.

Senior Wolves officials did not expect to be in a relegation fight, and they needed someone they can trust to guide them away from the bottom three.

After two Portuguese managers in a row, the big question is: do they lean on Jorge Mendes to find a third, who will know so many of Wolves’ players, or do they go for someone with Premier League nous?

Wolves’ immediate top-flight future might depend on them getting it right.