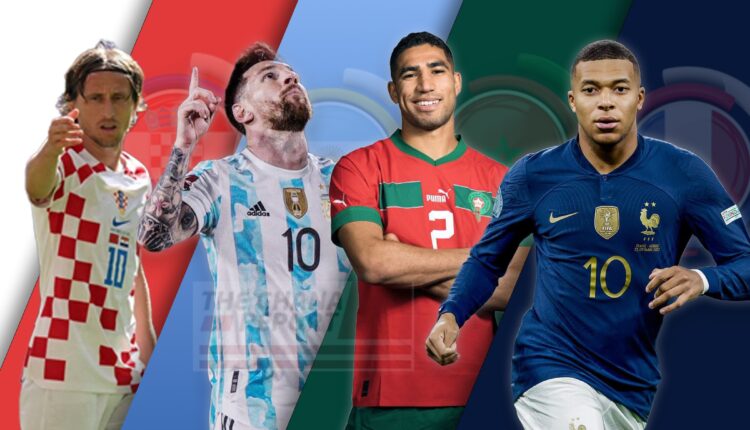 World Cup 2022 Semi-Finals: What You Must Know About The Fixtures

The 2022 World Cup in Qatar will go down memory lane as one of the most competitive showpieces.

It was the first time the tournament’s calendar was changed from June to November with many pundits sceptical about the turnout of events.

But it has been full of excitement and suspense from the first match to the quarter-finals witnessed few days a ago.

The exciting manifestation of top-class performances by the 8 teams as they fight for a place in the last semis has been worth every time spent behind the screens and cheers at the various stadiums.

Croatia’s resilience saw them kick- out the most successful team and tournament’s favourite Brazil out of the tournament to book a clash against Argentina who were able to overcome the pressure from the Netherlands.

The rising star in this tournament and Africa’s hope Morrocco managed to beat Portugal after 90 mins, the only match that did not travel to extra time and will now face France, the defending champions after they also eliminated England.

European football continues to dominate the world stage as two teams qualify for the semis, joining one from South America, and a historical finish for Africa making the final 4.

TGR Sports lays out all you need to know about the upcoming semi-final fixtures.

Facts: Argentina and Croatia both sealed their place in the semifinals with penalty shootout victories over their opponents, the Netherlands and Brazil respectively.

The two teams are no strangers to each other in the history of the World Cup, having met each twice in the past tournaments and also battling it out in three friendlies.

In terms of better results, none is ahead on paper as they each have recorded two wins after drawing their first-ever match back in 1994.

Across the five fixtures, Croatia have managed to score more goals than Argentina with seven strikes compared to five.

The recent meeting between them was back at the 2018 World Cup in Russia, where finalist Croatia smashed Argentina 3-0 in the group stages.

Facts: Defending champion France will play the African juggernaut Morocco, which became the first African and Arab nation in the history of the FIFA World Cup to book a place in the last four.

France won their quarter-final clash against England with a 2-1 victory while the giant killers in Qatar World Cup defeated Portugal 1-0 after 90 mins.

Morocco and Croatia, another semi-finalist in the tournament are the two undefeated teams to reach the semifinal in this World Cup.

However, France have never lost against Morocco in open play, as both have met five times so far in international friendlies but are yet to meet at the World cup.

The only win recorded by the North African side was in 1998 friendly which after a 2-2 draw after 90 minutes, scores had to be settled with a penalty shootout which the Atlas Lions won.

Morocco would like to become the first African nation to reach the World Cup Final but has to do so by beating the defending champions France.