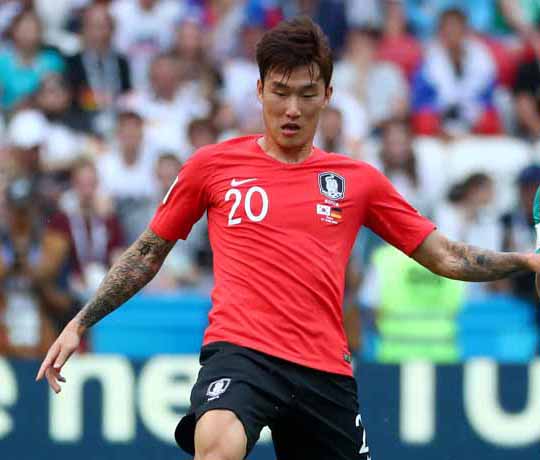 South Korea defender Jang Hyun-soo has received a lifetime ban from playing for the national team and hit with a 30 million won ($26,448) fine after he was found to have falsified records relating to his military service exemption.

All able-bodied South Korean men must complete almost two years military service as part of efforts to maintain a deterrent against the North but athletes can earn exemptions by winning a medal at the Olympics or gold at the Asian Games.

As part of the exemption conditions, athletes must undergo four weeks of basic military training and undertake more than 500 hours of community service over a three-year period.

Jang, who has 58 caps and was part of the team that won gold at the 2014 Asian Games in Incheon, has admitted to submitting false records detailing how many hours of community service he has performed.

The Korea Football Association met on Thursday to decide how to punish the 27-year-old, who played in all three of Korea’s games at the World Cup in Russia.

“Jang has been permanently disqualified from playing for the national team and has been fined 30 million won,” a KFA spokesperson said by telephone on Thursday.

In addition to the KFA sanction, the Sports Ministry has given Jang an additional five days of compulsory service.

Jang, who will now miss the Asian Cup in January, had apologised on Monday and said he would undertake the required community service.

“I am sorry to have disappointed everyone for such a shameful issue,” he was quoted as saying on the KFA website.

The issue of military exemptions has come under the microscope in recent months.

The incentive was introduced in the 1970s as part of Seoul’s drive to become a world sporting power and raise its profile on the global stage but it has come in for criticism in recent years as the country rebalances its priorities.

Some have called for the exemption system to be abolished altogether, questioning its fairness in an era where the South Korean public have been yearning for an end to privilege and lopsided advantages in all walks of life.

Tottenham Hotspur striker Son Heung-min was the latest high-profile athlete to win an exemption after he led South Korea to the gold medal at the Asian Games in Jakarta in September.