Crude oil prices fell further on Tuesday, with WTI falling to its lowest benchmark price since January this year. 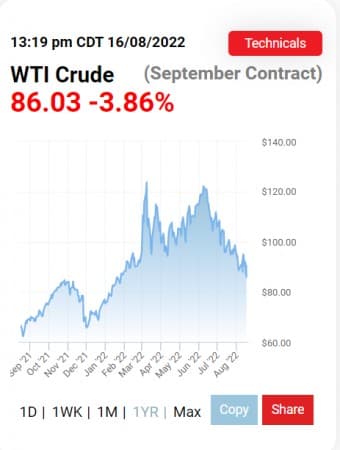 The weight of disappointing data out of China—the world’s second-largest oil consumer and largest oil importer—was compounded on Tuesday by developments surrounding the Iran nuclear deal. Just moments before the deadline, Iran sent its written response to the EU regarding the “final” nuclear deal text. In its letter, Iran suggested that it was closer than it had ever been to securing a deal, although there were a few sticking points—mainly that the U.S. guaranteed the deal couldn’t be changed by future U.S. Presidents.

Despite the current crude oil fundamentals that suggest the market is still tight, the market fear is that Iran could unleash on the market hundreds of thousands of barrels of crude oil per day if sanctions were to be lifted. Iran has said that it could ramp up production and exports within months.