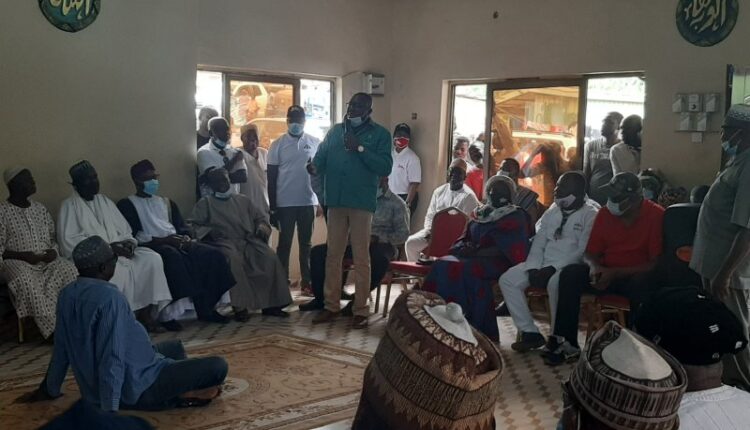 The National Chairman of the National Democratic Congress (NDC) has dismissed claims that the party intends to build mortuaries in Zongo communities if it wins the December polls.

Rather, Samuel Ofosu-Ampofo explained that the party had stated that it would collaborate with public hospitals across the country to designate special places in the mortuaries for Islamic burial and not to build mortuaries for them, as widely publicised.

The NDC Chairman gave the clarification when he accompanied the running mate of the party, Prof Naana Jane Opoku-Agyemang to pay a courtesy call on Eastern Regional Chief Imams and Zongo Chiefs in the New Juaben South Constituency in the Eastern Region.

The NDC vice-presidential candidate has been winding up a tour of a region that is the home region of President Nana Akufo-Addo and forte of the New Patriotic Party.

But the NDC running mate is hoping to use a five-day tour of the region to make case for the party’s manifesto as she has been offering clarifications to some promises in it book of promises, policies and programmes.

There are disparities on the interpretation of Islamic law concerning burials but some fundamental principles apply—a person must be buried as soon as possible after death.

In that regard, Mr Ofosu-Ampofo said the  NDC arrived at its decision after interactions with the Association of Council of Muslims and the Muslim Federation, who raised issues concerning  Muslims not being buried according to their traditions.

There are also certain practices that should occur as soon as possible after a person dies,  including washing the body and shrouding it in cloth.

“As a listening party, we came up with an idea to uphold their tradition and not to despise them,” he stated.

He told the people of the Zongo community that the NDC had come up with special infrastructural interventions to eradicate poverty in the Zongo and inner communities, which included the Suyaya Fund which aimed at providing loans to market women to boost businesses.

The NDC running mate, who was in the region to canvass for votes in the upcoming elections, met with various groups, including artisans at Koforidua magazine and teacher unions to explain the NDC manifesto, relating to their concerns to them.

At the Koforidua Magazine, where he met artisans, Prof.Opoku-Agyeman said the NDC would not abolish the importation of used vehicles which created jobs for teeming youth in the industry but rather would support them to upgrade their trade.

She told the teachers that the new NDC government would provide a laptop and means of internet connectivity to teachers to enhance their output.

They would also provide projectors in classrooms to improve teaching and learning.

She appealed to the Imams, chiefs and people of the community to support her and Mr Martin Otu Offei, the Parliamentary Candidate for the New Juaben South Constituency, so they would be elected to do more for the people of the Zongo.

She later paid a courtesy call on Nana Kodua Jesse, Chief of Oyoko and former council of state member and was given a rousing welcome by party supporters, clad in their party paraphernalia.