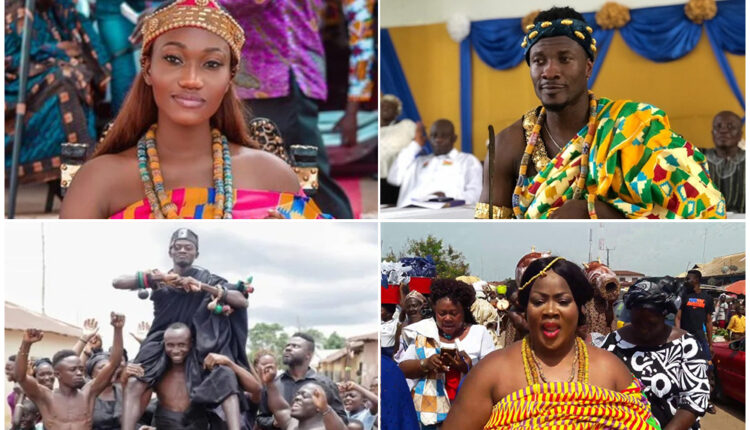 10 Celebrities Who Least Expected To Be Conferred With Royal Titles

Having the title as King/Chief  or Queen is a prestigious one which are conferred on people based on family lineage.

In Ghana, there is a privileged class of people who because of their royal lineage are certain about their future enthronement to traditional rule. Such persons are mentored from childhood in the culture and traditions of their communities.

In some cases, persons without the tinge of royals are bestowed with chieftaincy titles due to the position they find themselves, special services they render to society or personal achievements, the honour of which gratified other constituencies. There are some Queen Mothers who gained their titles by virtue of marriage to Chiefs/Kings. Development chief is handed to persons deemed reliable enough to provide impetus for development or made respectable progress in personal lives as to be counted upon to affect the whole chiefdom in that manner. Non indigenes have been earning such royal badges in some Ghanaian communities.

The Ghana Report chanced on some Ghanaian celebrities who now have traditional titles. The additional notches delighted fans of these celebrities and made the headlines in entertainment news. 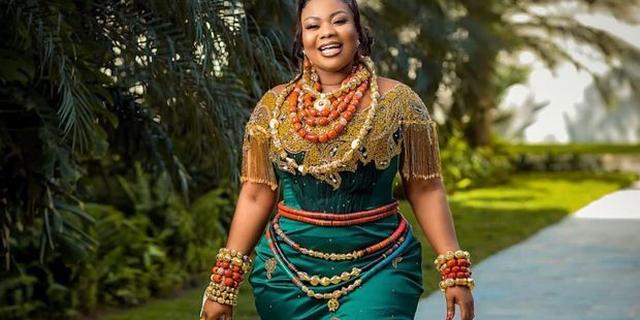 Females who have royal titles are mostly Queens but the veteran gospel musician made Ghanaians proud after recently being crowned the Chief of the Igbo Community in Ghana.

She gained this royal title as a result of constantly portraying the customs and traditions of the Igbo people in Ghana and that can often be seen in her music videos.

The royal title was conferred on Empress Gifty by the Chief of the Igbo Community in Nigeria, His Royal Majesty, Eze Dr Amb. Chukwudi Ihenetu. The occasion was so important to the extent  that dignitaries from Ghana and other countries graced the occasion.

Empress Gifty has also pledged to continue to support the Igbo people in Ghana to justify her new status as a royal.

Who Was Empress Gifty Before Becoming The Chief For The Igbo Community?

Empress Gifty as indicated early on is a veteran gospel musician who has composed over twenty gospel songs. She won the  VGMA Gospel Artist of the Year and Album of the Year in 2012, and won 4syte Gospel Music Video of the Year in 2021.  She won the maiden MUSIGA Gospel Performance of the Year Award in 2022 at the Ghana National Music Awards (GNMA). In fact she is a fashionista in the entertainment industry. Her dressing style is glamourous.

She is married to Hopeson Adorye, a politician. Oheneyere Gifty Anti is one of the most respected women in Ghana and in the diaspora because of her tremendous activities towards the empowerment of women. She is a journalist and a broadcaster in Ghana.  Until she stepped out of media studious, Gifty Anti had been a news anchor on Ghana Television for years and was a known public figure. Her popularity soared when she introduced and hosted a programme on the state broadcaster dubbed ”the Standpoint”. The talkshow caught fire and set many people discussing some of the issues broached on the programme.

Gifty Anti gained the title Oheneyere after tying the knot with Nana Ansah Kwao IV, the Chief of Adumasa, a community in the Akwamu area of Eastern Region. Till now, she is being asked to perform some roles as a Queen Mother in the palace to assist the  husband to rule in Adumasa Traditional Area.  She is loved by the people of Adumasa and the inky fraternity, being her primary constituency where she cut her teeth.

She has won awards such as “Tell It Moms Exemplary Resilience Feminist Honour 2019, National Malaria Advocate award, Most Inspiring Woman In Media, Most Influential Woman Award” and was also  honoured at the 2021 Women in Entrepreneurship-Ghana (WIEG) Awards and others. Wendy Asiamah Addo popularly known in the entertainment industry as Wendy Shay was enstooled as the Ahenemba Hemaa of Gomoa Afransi with the title Ofosuhemaa Shay 1 in the Central region on December 28, 2019 due to the way she has so many fans in the Central Region. According to the kingmakers of Gomoa Afransi, they decided to honour Wendy Shay with the Queenly title becauseher attachment to the town could serve as an attraction and boost its development. As a youth, Wendy is expected to be a rallying point for the youth to follow her example.

Wendy is not from Central region, she is a native of Eastern region and this really shows that she does not belong to the royal lineage of Gomoa Afransi.

Ofosuhemaa Shay 1 ( Wendy Shay), is an Afropop and Afrobeat singer who has composed so many songs. Wendy was born in Germany and is a trained nurse. She made most people believe that one can start a career and ends up in a different career due to the passion they attached to it.

To Wendy, music is like blood through her veins. She always try to bring something new to ginger the youth. Among Wendy Shay’s music collection are songs like Survivor, Kiss me on the phone, Emmergency, All for you, Warning and others. 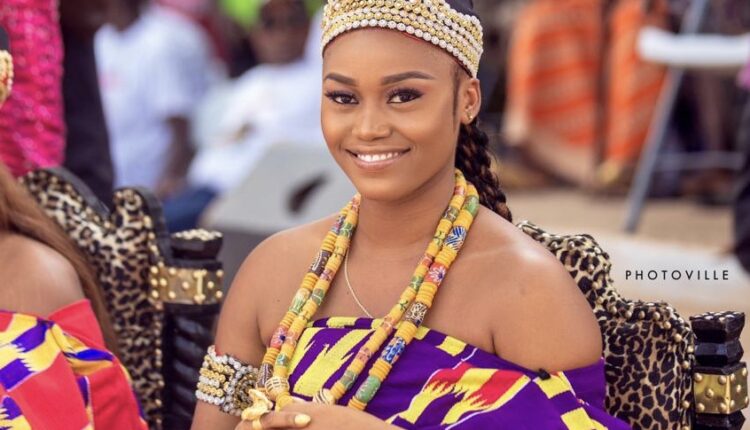 Ethel Esi Eshun with the stage name eShun has also been enstooled as the Juvenal and Youth Queen of Gomoa Afransi in the Central region in Ghana. eShun was honoured with the royal title Queen eShun 1. She was also enstooled with the responsibility of becoming a role model for the young and youth in Gomoa Afransi.

She and Wendy Shay were enstooled on the same day in the palace by the kingmakers.

eShun, a singer and songwriter, became popular through her hit songs like ‘Someone Loves Me, Akyia, Fa Me Kor , Koti Ma No’ and others. Nana Adwoa Awindor who became very famous in Ghana and abroad due to her popular Television Programme, ‘Greetings From Abroad’ is the Development Queen Mother for Afigya-Kwabre District in the Ashanti Region.

She was enstooled  Development Queen Mother to help foster development in the Afigya-Kwabre District.

Nana Adwoa Awindor really merits the royal title due to her own precedence of having embarked on development projects in her District.

In 2013, she was elected the First President of the Continental Executive Board of the African Queens and Women Cultural Leaders Network . She is also a member of the Ghana National Union of Queen mothers (Women Traditional Leaders).

She is the mother of the popular Ghanaian musician, Efya who has composed songs like ‘Best In Me, Little Things, One Of Your Own, Down, Forgetting Me’ and others. 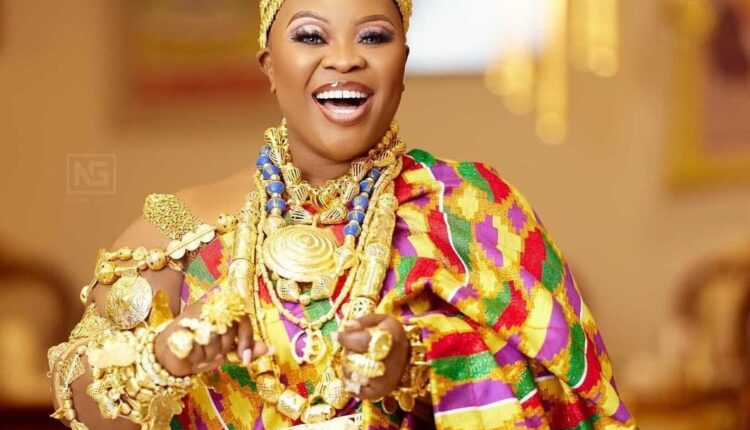 Rev. Clara Antwi Bofowaa is the wife of the popular Ghanaian preacher, Reverend Bofour, who is the founder and leader of Anointed Palace Chapel (APC).  Bofowaa together with the husband were enstooled as the Development Chief and Queen of Tepa Traditional Area in the Ashanti Region.

The kingmakers have entrusted in the Development Queen to help bring drastic development to the people of Tepa. Bofowaa before her enstoolment was someone who loved showing care, especially the needy and the disabled and in her church ministry. She is touted in positive light by the church.

Clara Antwi Bofowaa do not belong to the Royal lineage of Tepa and that glorious title bestowed her, made the members of Anointed Palace Chapel (APC) and her fans very glad.  She is very active on the ground looking for solutions for challenges facing Tepa. 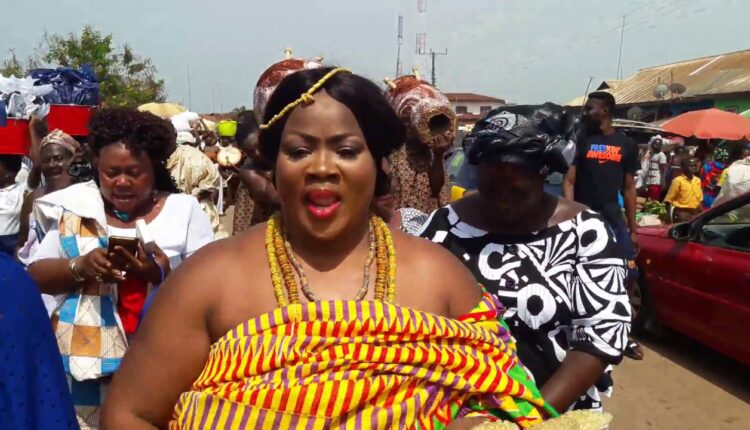 Oheneyere Mercy Asiedu is a veteran Ghanaian actress whose vibrant contribution to the Ghana Movie Industry is unbeatable. Oheneyere started acting in her teenage. She has been featured in so many ”Kumawood” movies like ‘Asoreba’, Obaakofou, Sumsum Aware, Kakra Yebedie, Ghana Yonko, Oba Yaa, Sama Te Fie’ and others.

As the wife of the Chief of Kunsu, she performs all the roles of  Queen Mother in the District. The selfless service of the couple in their traditional area, earned them an honorary doctorate by the Divine Key Believers Network International in collaboration with Peru’s Fedei Seminary, in USA. They gained this title by dint of hard work.

Mercy Asiedu, little did she know that  after waiting for so long for a soul mate God is about to promote her to a higher position through her next marital life. She is a Queen now and moves in the gaiety of royals. 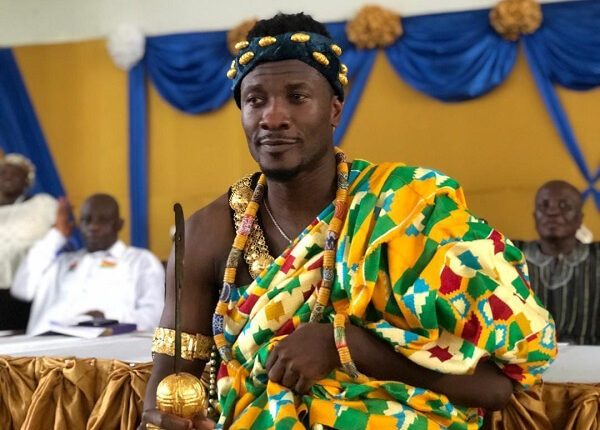 Asamoah Gyan is a popular footballer in Ghana, with a record goal scoring tally of 53 for the senior national football team, the Black Stars which he captained until 2019, when the badge was handed Andre Dede Ayew. In Ghana, he played club football for Dansoman Liberty Professionals. He then moved out of Ghana to play for clubs in United Kingdom, China and United Arab Emirates.

His missed penalty against Uruguay in the 2010 World Cup hosted by South Africa, if he had scored, could have sent Ghana to the Hall of Fame to become the first and only African side to reach world cup semis. That was not to be as he shot wide, the spot kick, fairly awarded to Ghana in the last minute of that cliffhanger.

Asamoah Gyan was enstooled Development Chief in Hohoe in the Volta Region in Ghana. The choice of the footballer was based on his concern for the district. According to the Elders of Hohoe Traditional Council, the legend footballer has built an ultra modern water facility for the St. Francis Training College in Hohoe.

The Gbui Traditional council , had during the 11oth anniversary of the St. Francis Training College  in Hohoe, honoured   Asamoah Gyan with the chieftaincy title for him to know how well his service to the Hohoe people  is appreciated  and to encourage him to continue with the good works. Asamoah Gyan is one of the wealthiest footballers in Ghana and Africa. 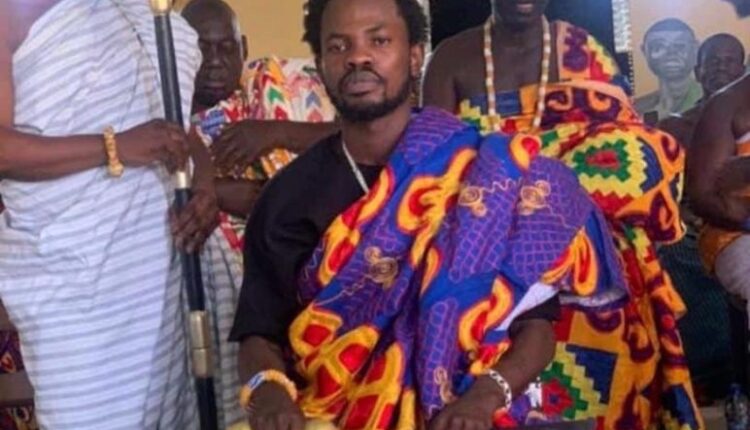 Fameye born with the name Peter Famiyeh Bozah is a popular Ghanaian musician who started trending after his hit song ‘Nothing I Get’ which is very emotional. Fameye in all his music can be seen to be communicating to the audience. He is acclaimed to be very humble and gentle.

Fameye is not from the royal lineage of Wassa but due to his achievement and good intentions for his people, he has been enstooled as the Nyankontonhene of Wassa Traditional Area. Fameye after his enstoolment was given the name, Nana Wassa Nyankonton.

He is to be an example for the people of Wassa and to help bring development to the town. The musician accepted this royal crown in good faith.

Fameye  is a Ghanaian musician who is making waves in the entertainment industry. He was a contestant for the season four of MTN Hitmaker organised by MTN. He has released so many songs like ‘Enkwa, Sika Duro, Barman, Destiny, Long Life, Nobody, Nothing I Get’ and many more. 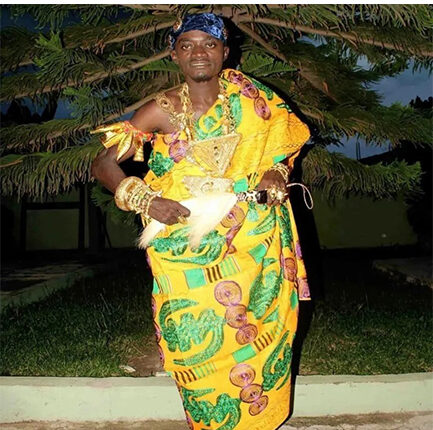 Kwadwo Nkansah commonly referred to as Lilwin in the entertainment industry of Ghana, is a talented actor, comedian and musician. He is loved by most Ghanaians because of his comedian style. He evokes much laughter in the acting role of elderly person.

He has been featured in so many Ghanaian movies like “Sure Banker, Aden Ne Otan Hunu, Suro Nipa, Armageddon, Ensei Me Din, Nipa Nye Nyame’ and others. With the songs too, he has to his credit “I don’t Think Far, Okukudurufuo, Mama Boss Papa (Yimama)’ and others where he was featured in the album of other popular Ghanaian musicians.

In 2018, Kwadwo Nkansah Liwin was crowned with the chieftaincy title  Nkosuohene Nana Nkansah of Duaponko Traditional Area, a town in the Afigya-Kwabre East Constituency of the Ashanti Region.

The Chief of Duaponko, Nana Akwasi Gyabaa bestowed this royal title on Lilwin because of how he continue to improve the living conditions of the people in Duaponko. Liwin has assured to continue to ensure that the people of Duaponko follow his examples to bring positive  changes to the Duapong Area.