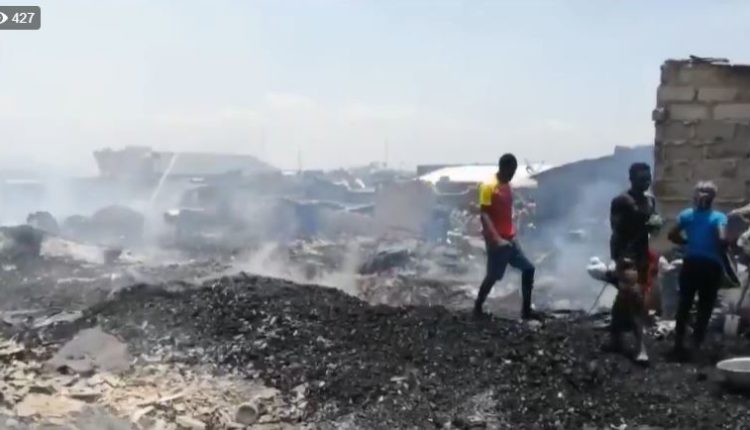 It has emerged that Tuesday dawn’s fire outbreak at Old Fadama in Accra was allegedly caused by an angry wife over her husband’s infidelity.

According to reports from Accra-based Asempa FM, the unidentified wife caught her husband in an affair with another woman in their matrimonial home.

She had returned from her travel Monday night, the radio station reported.

The couple engaged in a fight with the furious wife threatening to set her husband ablaze.

According to the residents, the couple begun their fight at about 10 PM on Monday.

Some of their neighbors intervened to restore calm between the angry couple. But the wife, reportedly, slept with vengeance playing dangerously on her mind.

Residents say the wife’s husband is a known womaniser.

“It started at about 10 PM, Monday night. When everyone had gone to sleep at about 2AM Tuesday, the saw fire coming from the couple’s room.”

“The fire quickly spread to other wooden structures. The youth in the area are outraged. But the couple fled the community after the act. The youth have vowed to deal with the couple should they set eyes on them,” the Asempa FM reporter said.

The anger of the jealous wife has rendered thousands of residents in the entire community homeless.

Over 800 wooden structures have been razed down by the wife.

Most of the residents have appealed to government, particularly NADMO, to come to their aid to provide them with mattresses and shelter to spend the night.

Properties running into thousands of Ghana cedis were completely destroyed by the inferno allegedly caused by the scorned wife.

Some of the affected residents accused personnel of the Ghana National Fire Service (GNFS) of arriving at the scene with an empty fire tender.