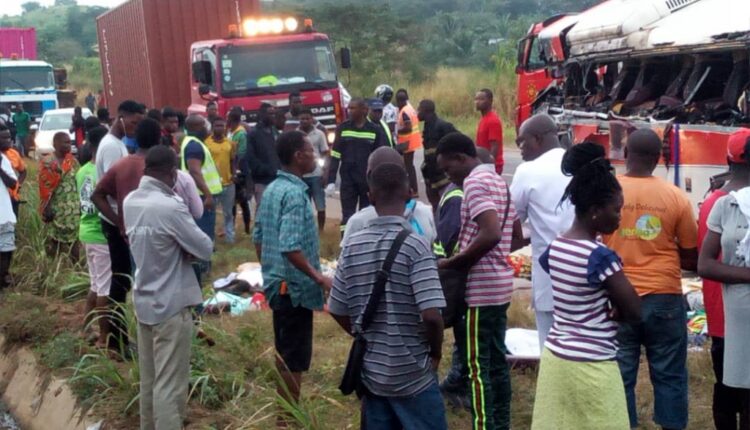 Update: At least 13 dead in Tuesday morning carnage at Suhum

At least 13 persons have been confirmed dead in a road carnage on the Suhum road in the Eastern region Tuesday morning.

Out of that number, six are said to be females and seven males, the Medical Superintendent of the Suhum Hospital, Dr Kofi Ablorh has confirmed.

The dead included a nine-year old, officials of the National Disaster Management Organisation (NADMO) have revealed. The accident happened at about 5 am this morning.

At least 50 people are injured in the accident on the highway, notorious for road fatalities.

Giving further details, Dr Ablorh explained that “Two of them had injuries in the abdomen but were stabilised and referred to the Koforidua Regional Hospital. 18 of them were minor injuries so they were seen at the OPD and discharged.”

It involved a bus carting goods bound for Burkina Faso and two other vehicles, including an inter-city STC bus.

Details are trickling in but the accident scene remains a ghastly sight with bodies strewn all over while others are mashed in metals of the buses.

An eyewitness account had it that the driver of the haulage vehicle was driving haphazardly on the road on the Accra-Suhum portion of the road.

The STC bus which was heading to Accra saw the careless driving and attempted to use the shoulder of the road and ended up in a ditch. A KIA Grand Bird bus, which was behind the STC saw the haulage vehicle a little too late.

And in an attempt to avoid a head-long collision, it swerved, however, the side of the bus smashed and slit open from the driver side all the way to the back of the 45-seater bus, killing some passengers sitting along on that side of the vehicle.

“The impact resulted in the death and injuries to scores of people sitting on that side of the bus. The driver of the Grand Bird bus really tried to dodge the truck but was not successful”, the eyewitness continued.

“We rushed to the vehicles to rescue the people but it was difficult so we rushed to call the ambulance at Asuboaye. When we came back the police from Nsawam and Suhum and the ambulance service have arrived at the accident scene and were seen busily working to safe lives and rescue the injured.

“The dismembered bodies of the passengers were scattered all over. It is such a gory sight. The bus is a very long one,” the eyewitness told the media.

A NADMO official, Kojo Mintah, said the scores of the injured had been rushed to the Nsawam and Suhum Government hospitals. 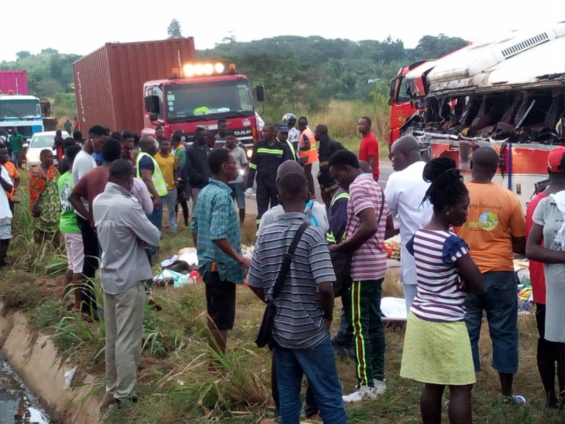 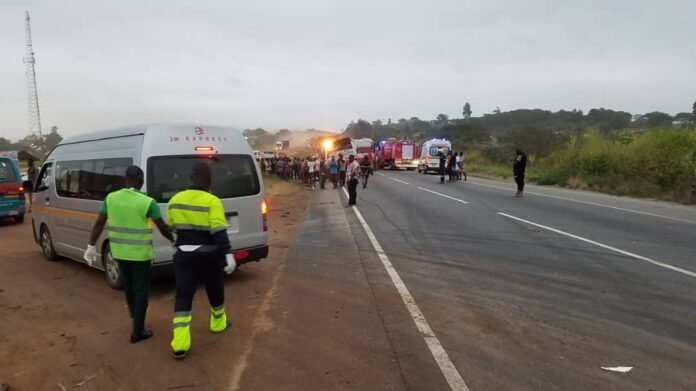 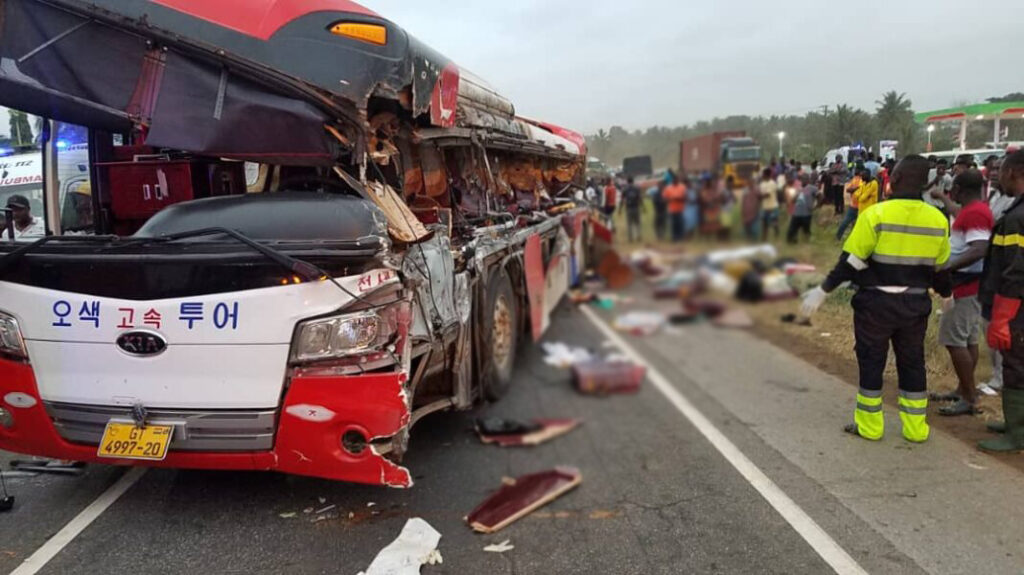 Tuesday’s accident makes it the fifth reported accident on the road Suhum-Kumasi road this year. At least 23 people have been reported dead.

Six people are confirmed dead in an accident that occurred at Obretema, near Suhum, on the Accra-Kumasi highway, in the Eastern Region.

According to reports, five died on the spot when a Mercedes Benz Cargo truck with registration number GE 5764-V heading towards Kumasi, lost control of the vehicle and collided with a Toyota Tacoma pick-up, carrying seven people.

On March 14, three persons were confirmed dead after a KIA bus they were travelling on crashed into an articulator truck at Beposo near Teacher Mante along the Suhum-Nsawam Highway.

The bus which was carrying 31 passengers attempted to overtake a vehicle ahead of it and in the process, crashed into the truck which was coming from the opposite direction.

One person has died while many others are injured in a fatal accident at Asuboi near the Suhum stretch of the Accra to Kumasi Highway.

The victims were rushed to Suhum Government Hospital for treatment while the body of the yet to be identified deceased deposited at same Hospital.

Three persons died in a fatal accident involving a VVIP bus with registration number GL 527-14 at Amanase near the Suhum stretch of the Accra- Kumasi highway on September 8.

The bus was carrying about 43 passengers. Many of the passengers reportedly suffered serious injuries with some in critical condition hence rushed to Suhum Government Hospital for emergency healthcare. 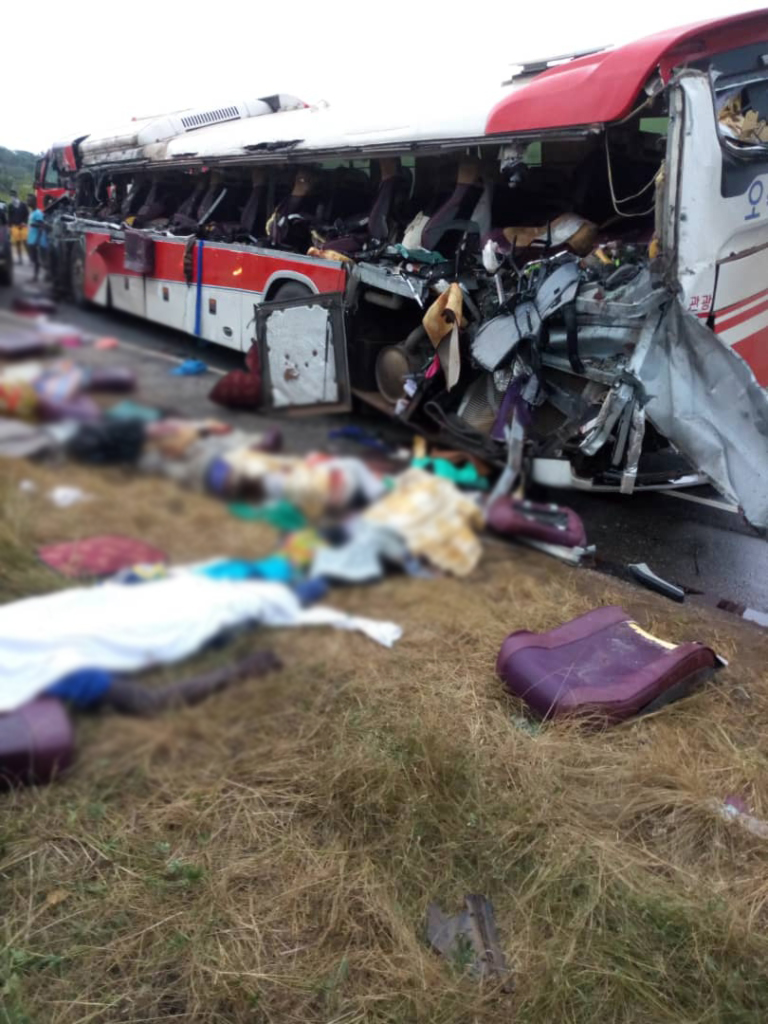