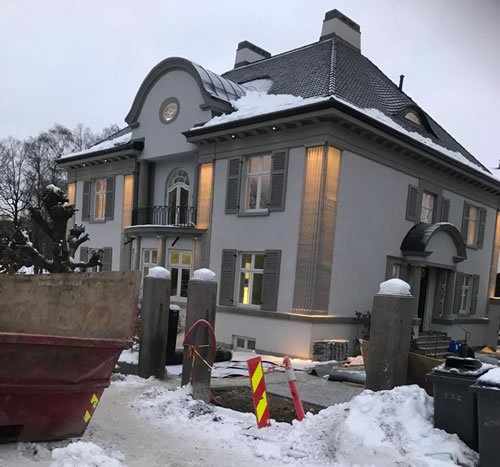 The Minority in Parliament has provided what it says is proof of government’s intention to spend a whopping $12m to buy a building in Norway which only last year was priced at $3.5million.

They are, therefore, demanding a presidential probe into a scandal they say has tarnished the image of the country.

At a press conference in Parliament, Tuesday, Ranking Member for the Foreign Affairs Committee Samuel Okudzeto Ablakwa provided copious documents, including video evidence, he believed were attempts by the government to purchase the facility to be used as Ghana’s Embassy in Norway.

Government has insisted an offer was made for it to buy the property but it has rejected the offer and no penny has been spent, a position Ablakwa vehemently disagrees.

He told journalists, contrary to government claims that it was only a passive buyer with no interest in the inflated property, he had documents to show that the government of Ghana made demands on the seller with a clear intention to purchase the property.

“You can tell that this is the Ghanaian government making demands on the seller. There shall be installed two toilets as shown in the drawing,” he read a copy of a document he said government had presented to the seller.

There was drama on the floor of Parliament Monday when the Foreign Affairs Minister Shirley Ayorkor Botchwey attempted to move the appropriation bill.

She was confronted by the MP for North Tongu Samuel Okudzeto Ablakwa who raised concerns over a building in Norway which he claimed government was planning to buy.

According to him, the government had inflated the price of the building it intends to use as a Chancery in Norway by over $8 million.

He presented some documents which the Speaker Prof Mike Ocquaye objected and described as inadmissible.

But that did not end the drama. The Foreign Minister, Shirley Ayorkor Botchwey shortly after sitting, engaged Ablakwa in a heated argument which turned into a confrontation when Prampram MP Sam George attempted to capture the exchanges on video.

A day after the drama, the Foreign Ministry issued a statement claiming it had not made any payment for the building even though an offer had been made, an offer they have rejected.

But Ablakwa insisted government is far from being candid on the matter. He said government has accepted to pay for the property and has gone ahead to make demands for renovation.

Contrary to claims by the minister that she wrote to the seller of the property on 12 December that they were no longer interested in the building, Ablakwa said the evidence he has suggests that on the 13 December the government of Ghana was still renovating the property.

He said their own investigation with the team renovating the property suggests they were working on the specifications as requested by government.

Ablakwa read copiously what he said was an agreement between the government of Ghana and the seller of the property.

“If you only expressed interest how come you gave them your specifications,” he said.

Part of the clause in the document said government had seven days to agree to purchase and the days had elapsed.

He further quoted figures contained in the document brought to Parliament by the Minister for approval, figures which confirmed government’s readiness to pay for the property.

“Before you bring us documents with all these inflated figures it should have gone through some due diligence within the executive.

“Parliament is not a dumping ground where you come and dump all these documents for approval and then you say you have only gone to express interest.

He challenged the president to commission an inquiry into the transaction.

But the Deputy Foreign Minister Charles Owiredu told Joy News if he had power to counsel the president he will tell him to ignore the allegations because no amount has been expended.

“It was an offer. As I speak to you we never accepted the offer from the seller,” he said.

He argued any agreement sealed with a seller must be signed by the Foreign Minister or his representative but no such signature exists.

According to him, a decision was taken by the president to open a chancery in Norway because of the huge benefits i

A five-member team was dispatched to Norway to find a place to be used as the embassy.

He said the team brought back options of various properties and made recommendations to the Minister to accept.

According to him, the Minister later found out that the prices of the property had been padded and so he decided to discontinue the purchase agreement.

He said no money had been expended.