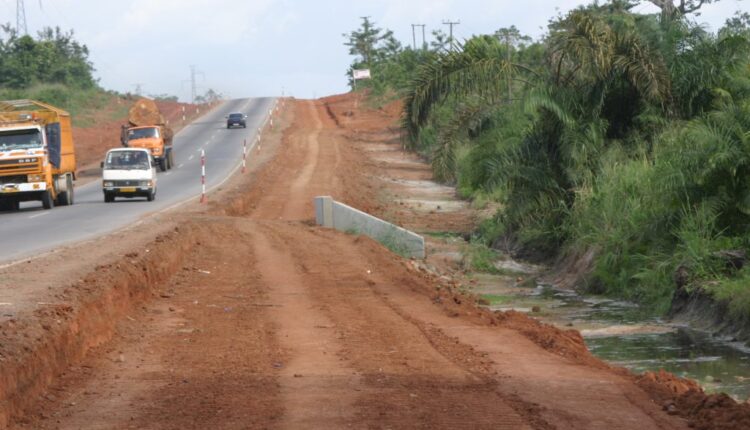 2021 will be the second year of roads – Akufo-Addo

The government has reiterated its commitment to prioritize road construction, a pledge it first made in 2019.

“Our roads are being constructed at a much faster pace than before and yes I acknowledge that there are still many more kilometres that need to be constructed.

“We defined last year as the year of roads, this year will be the second year of roads as we continue with our focus of dealing with the deficit in our roads,” the newly sworn-in president reiterated.

In November 2019, the Akufo-Addo administration assured Ghanaians of good and motorable roads come 2020, saying, the year will be christened ‘year or roads’.

It assured the populace that enough funding to commence construction and reconstruction of deplorable roads has been allocated for the project.

With that said, the government promised to get the road sector moving and pay contractors to go back to work as it assured contractors of 80% of their monies.

Prior to President Akufo-Addo road promise in 2020, there were numerous protests from across the country over the deplorable nature of the roads in recent times.

Residents, outraged by poor roads resorted to protests to pile pressure on authorities to get their roads fixed. They burned tyres and wielded placards with varied inscriptions to have their roads which are full of potholes and bumps fixed.

On July 23, 2020, the Finance Minister Ken Ofori-Atta, in his 2020 mid-year supplementary budget review presentation earmarked roads to be given attention.

Part of the list was a gang of yet-to-be completed Pokuase Interchange under the Accra Urban Transport Project, Tamale Interchange project and Kumasi-Lake roads project.

Construction of critical inter-regional road projects and bridges, including the Eastern Corridor Road Phase I, were all at various stages of completion. 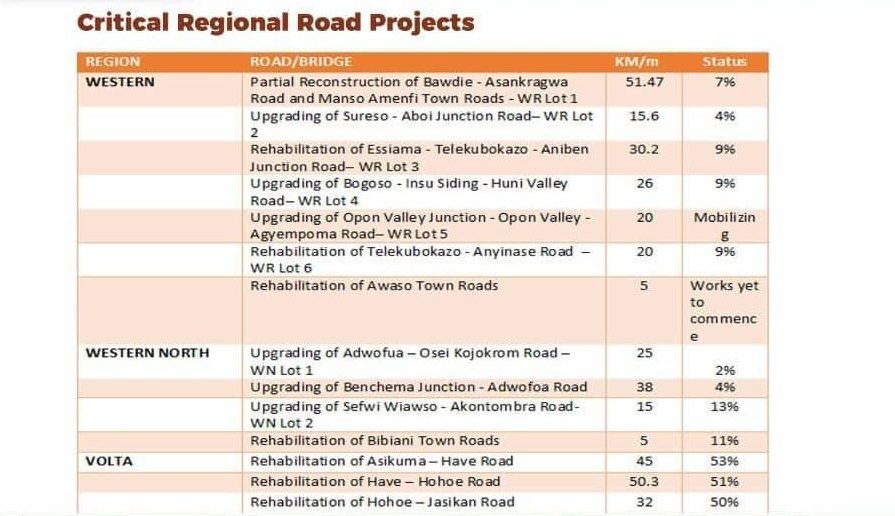 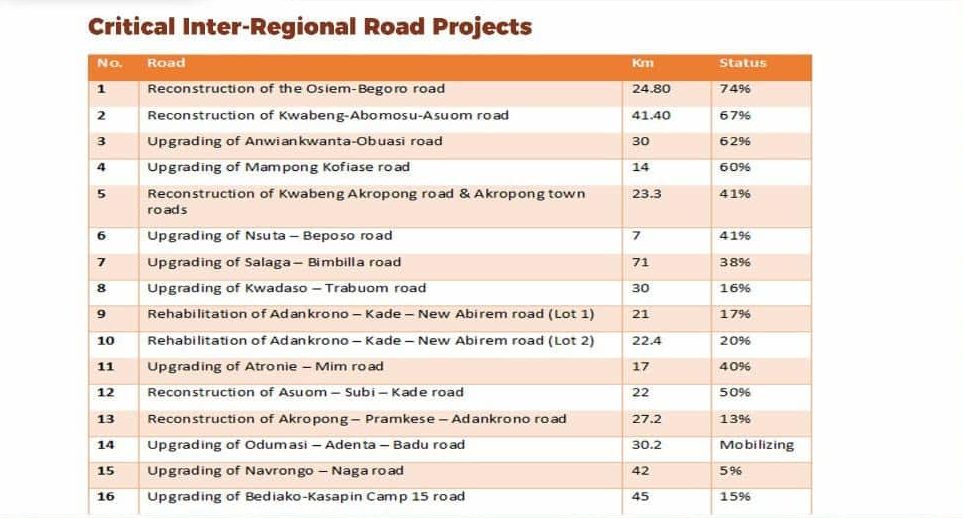 Although some of these road works are yet to be completed, the Tema Motorway Roundabout, a 3-tier interchange has been completed and commissioned.

The President in August 2020, inspected ongoing construction of the 3.5 kilometres of road from Ankyenyini to the Catholic Grotto at Egyam in the Ahanta West District as part of his two-day tour in the region. 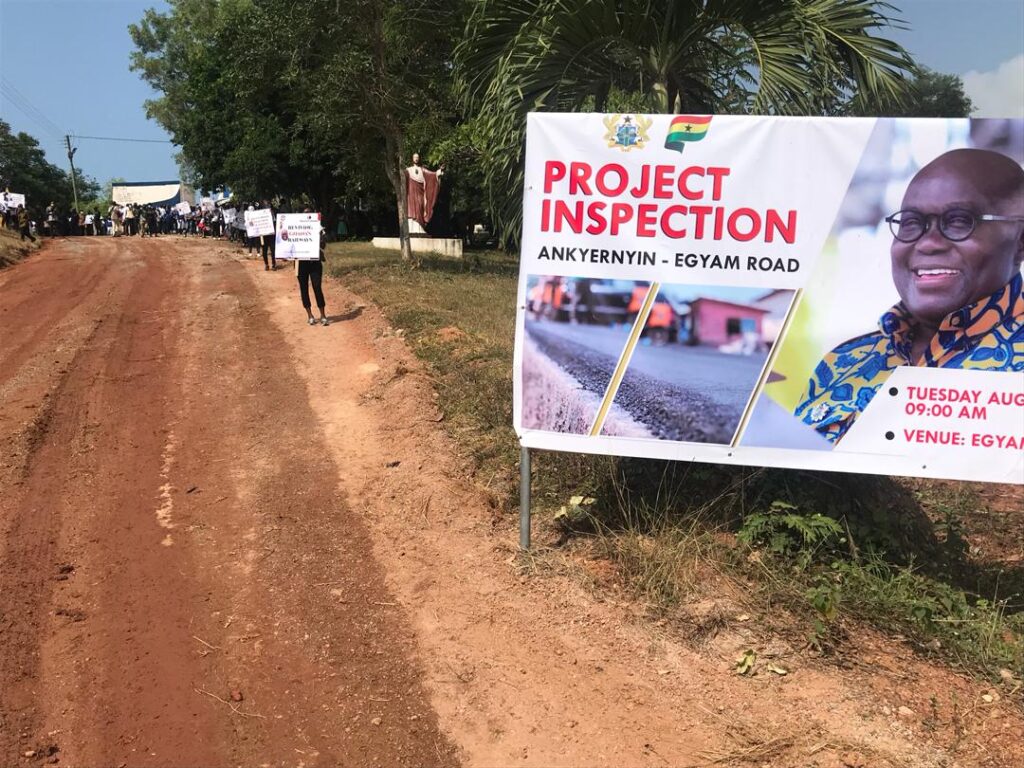 The Minister for Roads and Highways, Kwasi Amoako-Atta, who was also on President Akufo-Addo’s two-day tour added that some 80 different road projects are ongoing concurrently in the Western Region to help address the challenge. 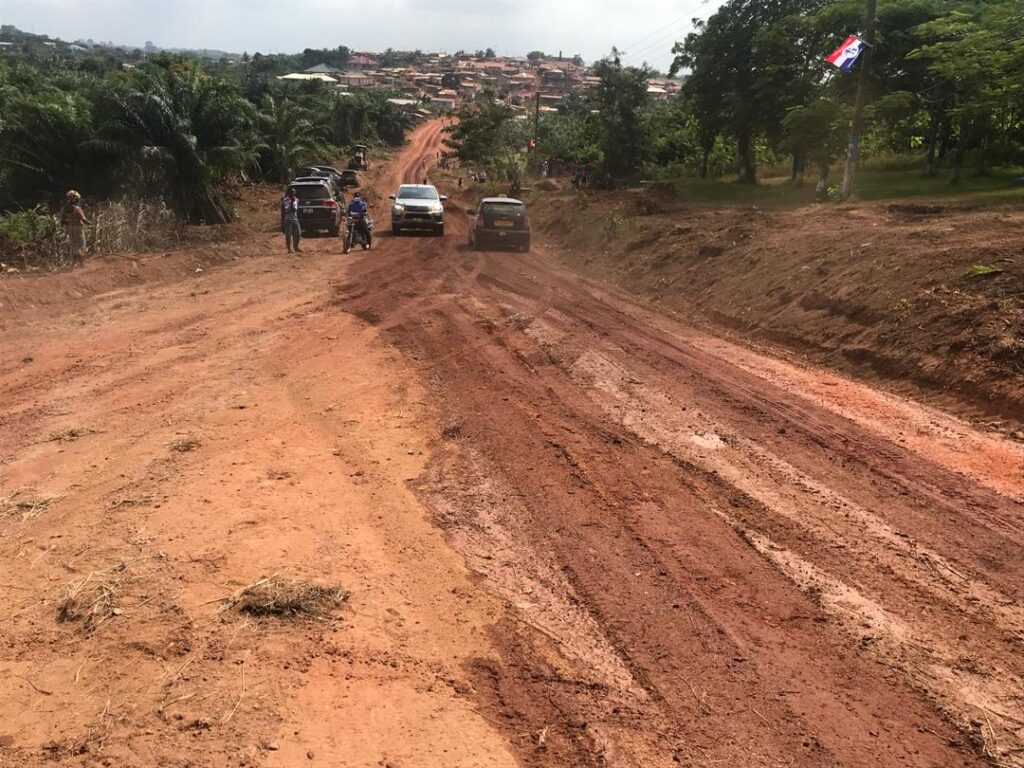 In June 2020, the Suhum Interchange on the Accra-Kumasi highway was commissioned by President Akufo-Addo.

This was to help alleviate the plight of the public who use that section of the Accra to Kumasi road.

A project which was funded by the Ghana Cocoa Board (COCOBOD) under the Cocoa Roads Programme.

On February 25, 2020, a Deputy Director of Research for the opposition NDC, Kale Caeser made a mockery of the government’s determination to construct more roads in the country.

“You came to power three years ago but didn’t see the need to embark on remarkable road projects but now that you realise you have few months to be booted out of power, you turn around to engage in slogans and declare this year a year of roads,” the NDC official said in an interview on Power 97.9 FM.

“Their so-called new roads [declaration] is a hoax. Currently, the government collects monies from Excise for the purposes of fixing some of the roads. For the year 2020, the government has projected to rake in revenue of GHS 1.7million from taxes.

“He has only allocated an amount of GHS 1 billion and GHS 14 million to the Ghana road fund -taking GHS 700 million from road fund for consumption, how can he fix the roads? Within a period of four years, the government has reduced the road fund allocation,” he stressed.