Finance Minister Ken Ofori-Atta is seeking parliamentary approval to spend GH¢137.5 billion in 2022 while seeking to generate GH¢100.5billion in total revenue and grants.

The expenditure is equivalent to 27.4 per cent of the country’s Gross Domestic Product (GDP) and the government would be compelled to seek other sources to finance the gap.

The projected 2022 revenue and expenditure leaves the country with an overall fiscal deficit of GH¢37.0 billion, equivalent to 7.4 per cent of GDP.

This was contained in the 2022 Budget and Economic Policy presented to parliament on Wednesday, November 17.

Mr Ofori-Atta explained that the revenue and grants are projected to rise to an equivalent of 20.0 per cent GDP, up from a projected outturn of GH¢70.3 billion, equivalent to 16.0 per cent of GDP for 2021.

Domestic revenue is estimated at GH¢99.5 billion and represents an annual growth of 44.0 per cent over the projected outturn for 2021.

“The increase in domestic revenue by 44.0 per cent is as a result of the impact of a major progressive tax policy, (“Baako P3”) complemented by improvements in tax compliance and reforms in revenue administration that we have outlined in this budget,” he explained.

Compensation of Employees is projected at GH¢35,841 million (7.1% of GDP) and constitutes 26.1 percent of the Total Expenditure.

Use of Goods and Services is also projected at GH¢9,149 million (1.8% of GDP). This represents 6.7 percent of the projected Total Expenditure (including Arrears clearance). 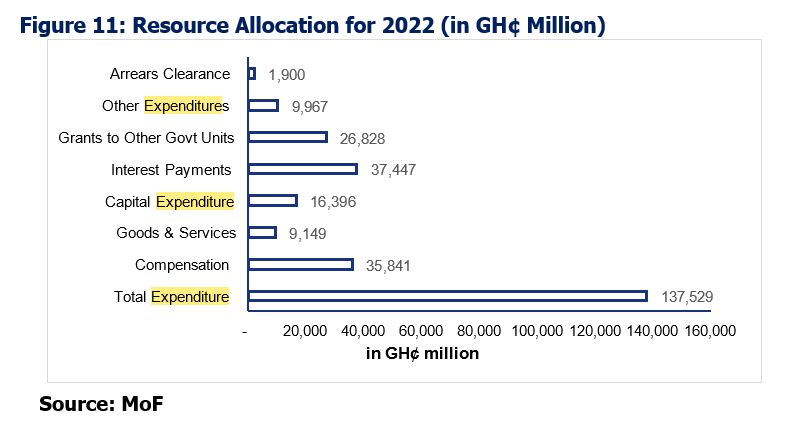 Of this amount, Domestic Interest due will constitute about 77.3 percent and amount to GH¢28,943 million.

“To reduce the cost of borrowing, the government will continue to explore options of reprofiling domestic debt in 2022,” he added.

Mr Ofori-Atta revealed that the government will continue to implement the Earmarked Funds Capping and Realignment Act to reduce budget rigidities and create fiscal space to fund growth-enhancing expenditures as has been done since 2017.

An amount of GH¢8,601 million has been estimated for Foreign Financed CAPEX and this will be funded by a combination of Project Grants and Loans.

The government’s oil revenue is pegged at the 2022 Benchmark crude oil output of 59.51 million barrels (163,044 barrels of crude oil per day), based on a three-year simple average of each producing field’s actual and projected outputs. Similarly, the Benchmark gas output, has been estimated at 96.54 trillion Btu for 2022.

The projected Petroleum Benchmark Revenue for 2022 is estimated at US$1,006.1 million.

This is made up of Royalties of US$206.5 million, Carried and Participating Interest of US$537.6 million, Corporate Income Tax of US$ 261.1 million and Surface Rentals of US$0.92 million.

The Benchmark Revenue for 2022, which is the petroleum receipts net of the amount ceded to GNPC, is estimated at US$679.2 million.

Of this amount, a sum of US$475.4 million has been allocated to the annual budget funding amount (ABFA) to support the implementation of the 2022 Budget, while the Ghana Petroleum Funds (GPFs) will receive US$203.75 million.

Mr Ofori Atta indicated that total foreign financing of the deficit as well as exceptional financing, namely the IMF’s Special Drawing Rights (SDR) will amount to GH¢9.1 billion, equivalent to 1.8 percent of GDP and will include a planned international financing programme (not to exceed USD 1Bn) to raise up to US$750 million for liability management and budget support, particularly, capital expenditure.

On the other hand, financing of the deficit from domestic sources, including net issuances from debt will amount to GH¢27.9 billion, equivalent to 5.6 percent of GDP.

The additional exceptional financing from the utilisation of the newly allocated SDRs by the IMF will augment and reduce domestic borrowing needs, according to the Minister of Finance.

He said the country will still rely heavily on debt financing to meet a significant portion of expenditures compared to Ghana’s peers.

“It is instructive to note that, on the expenditure side, for instance, interest payments and compensation payments alone amounted to GH¢48.7 billion which is 103.3% of total revenue and grants for Jan-Sept, 2021. In fact, these two expenditure items absorb all the revenue collected for the period. This trend must be reversed,” he stressed.

For him, domestic revenue mobilisation is the key to making the vision of ‘Ghana Beyond Aid’ a reality.

“We cannot, therefore, as a nation continue to depend on only 8.2 percent of our citizens to carry the burden of 30.8 million people. This is unsustainable and defeats all the tenets of economic prudence and moral justice,” he observed.

He assured that the government’s resolve to use revenue policy to support local industry and generate the desired environment for growth has not waned.

“In the coming year, the government will introduce measures that will revamp industry and make their products competitive in both the local and international markets.

“In this respect, it has become increasingly necessary to make some policy changes,” he added.